This Thursday at the Uni we played another game of Battle Group Kursk, this time with the aim of getting a better understanding of indirect artillery fire and air raids. The scenario was loosely based around the struggles in the river Psel Bridgehead on the 12th July 1943 between a Totenkopf battlegroup and elements of the 52nd Guards Rifles. The scenario I prepared quotes liberally, but in bowdlerised format, from Dennis Showalter's excellent 'Armour and Blood', which for me is the seminal overall account of Kursk. 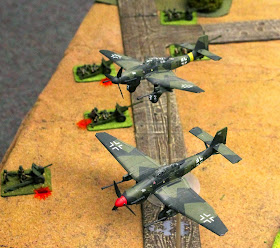 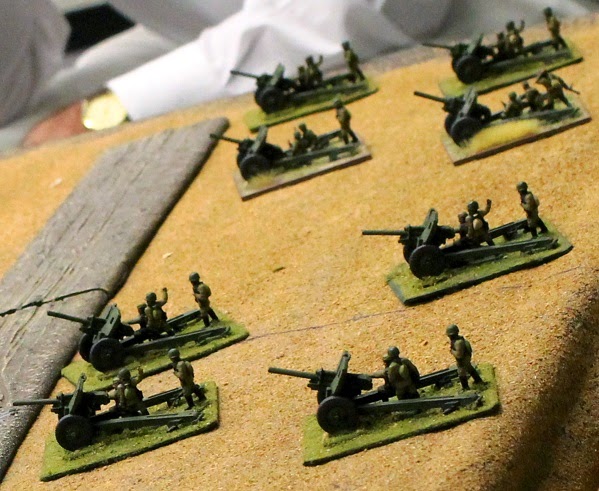 Rising ground stretches North from the the Psel River around Bogoroditskoe to Hill 226.6, behind which lies the key Karteschevka-Prokhorovka road. (Kart-Prok Road).
The area is dotted with woods, folds in the ground and small villages. The outskirts of the village of Mikhailovka is on the Eastern edge of the table.
The yellow rectangle represents the 12 x 6 foot table.
Totenkopf’s forward edge of the battle area is delineated by the Blue map trace, just South of the railway embankment.
Soviet elements of 52nd Guards Rifle Division are located North of the Red trace.
Situation:
" II SS Panzer Corp commander Paul Hausser’s orders for July 12 were straightforward. No more fooling around. This time apply the panzers' mantra: Klotzen, nicht kleckern ("Stomp, don't tickle" is an approximate rendering of the German colloquialism). That, however, did not mean a massed frontal attack, three divisions abreast, into the teeth of Russian guns. Hausser intended a sequential operation. Totenkopf's armored battle group would cross the Psel and push north, then turn east on reaching the Karteschevka-Prokhorovka road, which on the map offered a clear route into the rear of the main Russian position. 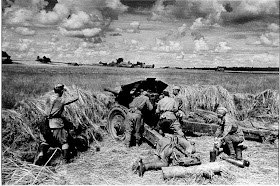 The Sixty-ninth Army had taken a predictable initiative by ordering its counterintelligence department-a uniformed branch of SMERSH (the Russian acronym for "Death to Spies")-to prevent further abandonment of the battlefield. By 4:00 P.M. on July 13, the responsible senior officer reported 2,842 officers and men "detained" and the mass retreat stopped.
Otherwise, the front commander was playing with an empty pocket. Every available formation of any useful size was committed to the defense or the counterattack. The commander of the 81st Guards Rifle Division ordered his regimental commanders to "introduce the strictest discipline" and "implement Order No. 227." Order No. 227, mentioned earlier in the text, was Stalin's "not a step back" directive of July 28, 1942, forbidding any commander to retreat without orders and allowing the summary execution of "panic-mongers and cowards" by specially organized "blocking detachments." That aspect of the order had been unofficially dropped a few months later. But on July 12, the Sixty-ninth Army's SMERSH detachment improvised seven of them. But if the Soviet defenses were shaken, the front never cracked. 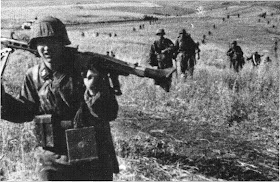 For their part, the Germans were showing the effects of wear, tear, and grit in the machinery. Here, as elsewhere in Manstein's sector, it was not just a matter of too few tanks at the sharp end. Too many veteran crewmen, too many experienced company officers, were gone. At dawn, Totenkopf's advancing panzer group discovered that the Russian infantry to its front had been relieved by the Fifth Guards Army's fresh 3rd Guards Rifle Corps: three divisions reinforced by extra guns, rocket launchers, and antitank guns.

Totenkopf's panzer grenadiers were sufficiently hard pressed that tanks repeatedly had to be brought forward in support. Heavy Soviet artillery fire forced SS riflemen to seek protection under their own tanks-a last resort for an experienced infantryman. Then the Shturmoviks joined in-unopposed. 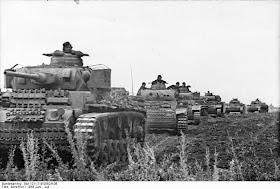 The initial objectives of Totenkopf's armor, however, remained: two hills high enough to command the surrounding terrain.
Occupying that ground were two Guards rifle divisions. The 52nd, moving into its own assault positions, was taken by surprise when the SS appeared to the front. But the Guardsmen were a match and more for Totenkopf's panzer grenadiers in both courage and tactical skill. According to a political commissar, their political spirit was also high. "

Totenkopf Battle Group ‘Kaiser’ is to clear the wooded area South of the Kart – Prok Road of enemy infantry and guns. 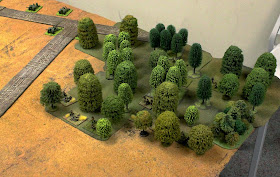 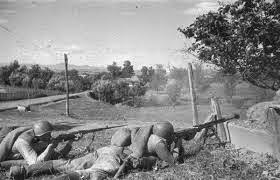 The Soviet player will deploy first anywhere N of the Red map trace, including positions in Mikhailovka if desired. Any positions in the wooded area, or Mikhailovka village, may be dug in prior to game start. All other positions are hasty and have no protective value.
The German player will then deploy on the start line, anywhere up to the Blue Map trace. All units to be on table.

The Soviet player will then start with one Sturmovik air raid, 2 A/C each carrying one large bomb, and 1 artillery bombardment of both 122mm batteries.

The German player will then start the first ‘free’ move…The game will end when either BG reaches its BG rating or the German Player has cleared the objective.
Air strikes. Preliminary Soviet strike as above, Stuka strike as below, then if drawn, armament as specified.
Local rules.  As detailed below, Totenkopf AFVs made a point of crushing Soviet slit trenches. Any unpinned German tank which spends half its movement on a Soviet position destroys that gun or section. 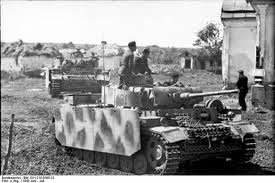 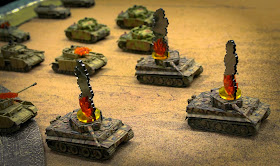 Its fair to say the initial Soviet airstrike lived up to its historical role, knocking out the handful of Tigers still remaining to Totenkopf. Glum faces on the German team! To add insult to injury the preliminary Soviet 122mm Howitzer bombardment then pinned half the remaining panzers... Well, if you will send an entire armoured division into the rear zone where all the guns are, across a single river crossing... 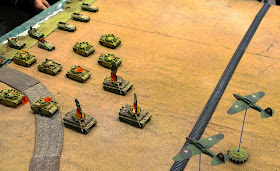 Did I mention the Soviets has lots of guns? To many for our command dice rolls, anyhow, as it left very few order activations for our infantry and anti-tank guns by the time we'd fired off two whole batteries of howitzers!

Nonetheless with admirable fortitude the German team pressed on - it was beginning to look as if their plan was to clear out the village of Mikahilovka which presented a threat to their right flank from the battery of 57mm ZIS 2s we had in there... 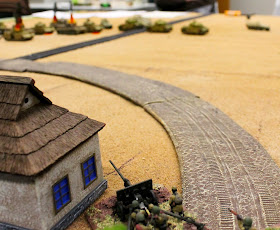 I was too hard pressed trying to coordinate the Soviet defence with consistently low orders rolls to take any photos, but John's infantry and panzers worked together with faultess all-arms cooperation to systematically clear the village - but not without cost and slowing up the main advance as the German panzers hesitated to present their flanks until the village was cleared...

However it was our artillery which was holding the Totenkopf advance up, consistently pinning sufficient of their AFVs and infantry trying to advance up the centre of the table.

So that it was actually the German panzer grenadiers that were making the running, forcing our forward observers to pull back from their forward positions on the edge of Hill 226.6. I think that the subsequent disruption to the previously continuous hail of effective artillery fire gave the German team the clue as to what they needed to do if they were to reach the objective - target our artillery with their pre-booked airstrike! 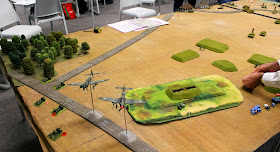 With devastating results! Most of our guns destroyed, those remaining pinned! This reduced our Battlegroup rating to a dangerously low level! The panzers forged ahead past the village with renewed confidence...Only to lose a few more Panzer IIIs to flanking shots from our remaining anti tank guns. 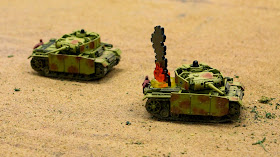 However as the German Panzer grenadiers eventually assaulted and destroyed the Russian infantry in the village, as feared our Battle Group rating tilted past break point - only to be told the Germans had also just reached theirs - with the objective, the woods, still untaken and full of fresh Russian infantry. We decided to call it a draw!
Most of the feedback from the players was positive about the scenario, although as always some players are more comfortable with absolute adherence to the rules and balanced point systems, whereas I prefer to think of the rules and points values as an aid to recreating a historical scenario. Given the historical outcome of the day's fighting, once again given in much abbreviated format below from Showalter, I think the scenario and game was a success. It was certainly in balance down to the wire!
What actually happened:

"Positions changed hands so often that the exact course of events remains vague. The SS, with Stuka support as welcome as it was belated, made enough initial progress to generate hope for the long-delayed linkup with Leibstandarte.
German accounts describe spectacular explosions, huge fireballs-and enough losses of their own to instill caution by the time Hill 226.6 was firmly in German hands. The tanks and panzer grenadiers encountered a series of defensive positions, some prepared and others improvised, all bristling with antitank guns.
Totenkopf's tankers made a point of crushing trenches and foxholes, burying defenders alive under their treads. But not until 3:00 P.M. did the Germans begin breaking Soviet defenses beyond immediate restoration.

Not all the comrades were valiant. Some of the 52nd's regiment and battalion commanders reported sick, straggled to the rear, or just ran away. When the panzers reached Hill 236.7, elements of the 95th Guards Rifle Division also broke and scattered. But around 4:00 P.M., 33rd Corps ordered maximum protective fire: every gun and rocket launcher that could come to bear was to target Totenkopf's tanks, even if they were in Russian positions. The barrage removed the impetus from an SS attack already eroded by a defense stubborn enough in some positions to be suicidal.
Small-scale advances nonetheless continued. As of 10:45 P.M., Totenkopf was comfortable reporting that its panzer group had reached the Karteschevka-Prokhorovka road-a day late and a large number of men and tanks short. On the map, only a few miles separated Totenkopf from the road leading into Voronezh Front's rear zone.

By now, Totenkopf's panzer grenadier companies were down to fifty men or fewer, so tired after days of close combat that the standard stimulants were having an opposite effect. The panzer regiment had lost almost half its tanks fighting its way out of the Psel bridgehead. Forty-five had been destroyed or damaged, including all the Tigers. " 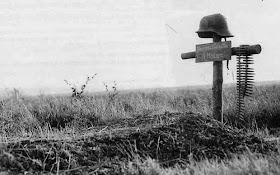