Having received my starter set for Warlord Games' Victory at Sea system, originally developed by Mongoose games, I set up a small game. The starter set is based around the 'Battle for the Pacific', so Ironbottom Sound off Guadalcanal would be the setting...However, whilst my painting is definitely of the 'OK at 3 foot' variety, fast it ain't - so I wheeled out some of my existing 1:2400 collection. 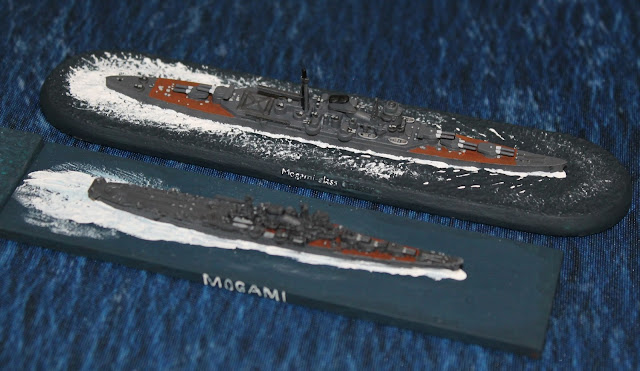 Above in the foreground is the later, seaplane friendly version of the Mogami in 1:2400, behind it her sister Kumano in the original iteration in 1:1800 from the starter set.

There's been a lot of negative commentary on the interwebs about the size and thickness of the Warlord bases, but I have to say that I don't have an issue with it, and appreciate the time saved in not modelling sea surface effects. As you can see in the previous scale comparison pic, the base isn't much thicker than the one I use for 1:2400 anyhow!

Keen to get into the rules, after a quick skim I set up the table with no particular scenario in mind, just a meeting engagement between a USN TF of 3 CA and 4 DD and an IJN force also of 3 CA and 4 DD, matching my existing models to the all important data cards. Noting that I didn't study the points value too hard, this seemed like a fair encounter battle, right?

Rolling for initiative and manoeuvring seems straightforward enough, and I took the time to confirm that if a force is in Formation One - line astern of the Guide - you can save a lot of time by just tacking the next mover right behind the one ahead, no matter how intricately you manoeuvre. And one thing I did learn from this initial tryout is that manoeuvring is going to be very, very important with these rules - at least when up against the IJN! 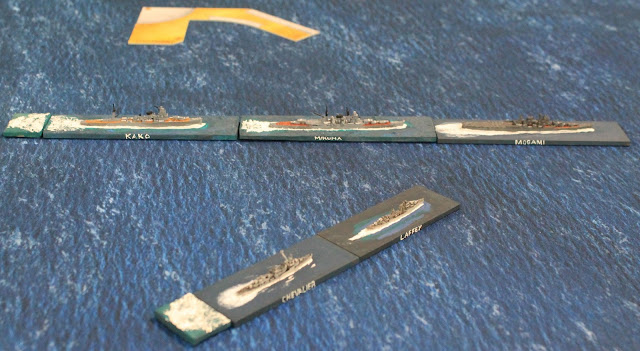 My initial focus was on the Gunnery aspect, which works well and seems historically authentic, particularly with regard to the lethal effects of longer ranged plunging fire. I also like the way that whilst care has to be taken with main battery firing arcs, secondary weapons are much faster to work out. The only issue with larger games, particularly if playing solo, is remembering which ships have moved and fired...

Whilst the starter set comes amply furnished with DC tokens and markers, I recycled some old wake markers to mark units that had moved, and golf tee shell splash markers to denote which ships had fired that move. No doubt since VaS has been such a sell out, commercially astute marker manufacturers are tooling up marker sets already! 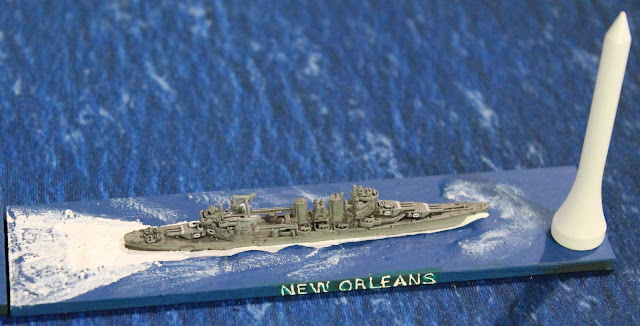 So went the day well? I was so focused on conning both forces for maximal gunnery - crossing the T - that both sides came of about even, although I was pleased to note that the rules reflect the lesser DC organisation and skills of the IJN compared to the USN. 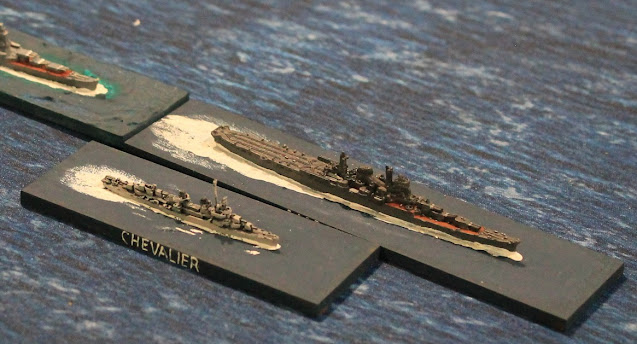 However the rules demonstrated their respect for history even more when it came to Torpedo actions - the USN DD's practically had to come alongside the enemy to have any hope of obtaining a hit, only to find their fish had wooden warheads!

The IJN Type 93 'Long Lance' torpedoes, however, were absolutely, historically devastating, with the Portland and New Orleans heading down to Davy Jone's Locker by move 3 and 4 respectively! Lest anyone think this level of destruction from torpedoes excessive, I'll just allude to the Battle of Tassafaronga off Guadalcanal whereby a force of 8 IJN DDs, surprised whilst offloading supplies, turned the tables on the far superior USN TF ambushing them with a salvo of Long Lances at a range far beyond that expected of torpedoes; sinking one Heavy Cruiser and writing off another two! 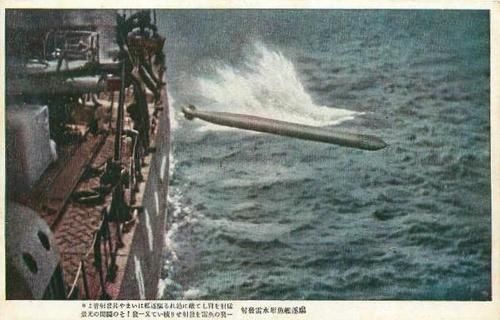 All in all, very impressed with these rules and pleased the Victory at Sea launch has been received so well. Looking forward to seeing the full ruleset come out early next year.
Posted by Sparker at 16:24