The Battle of Watling Street 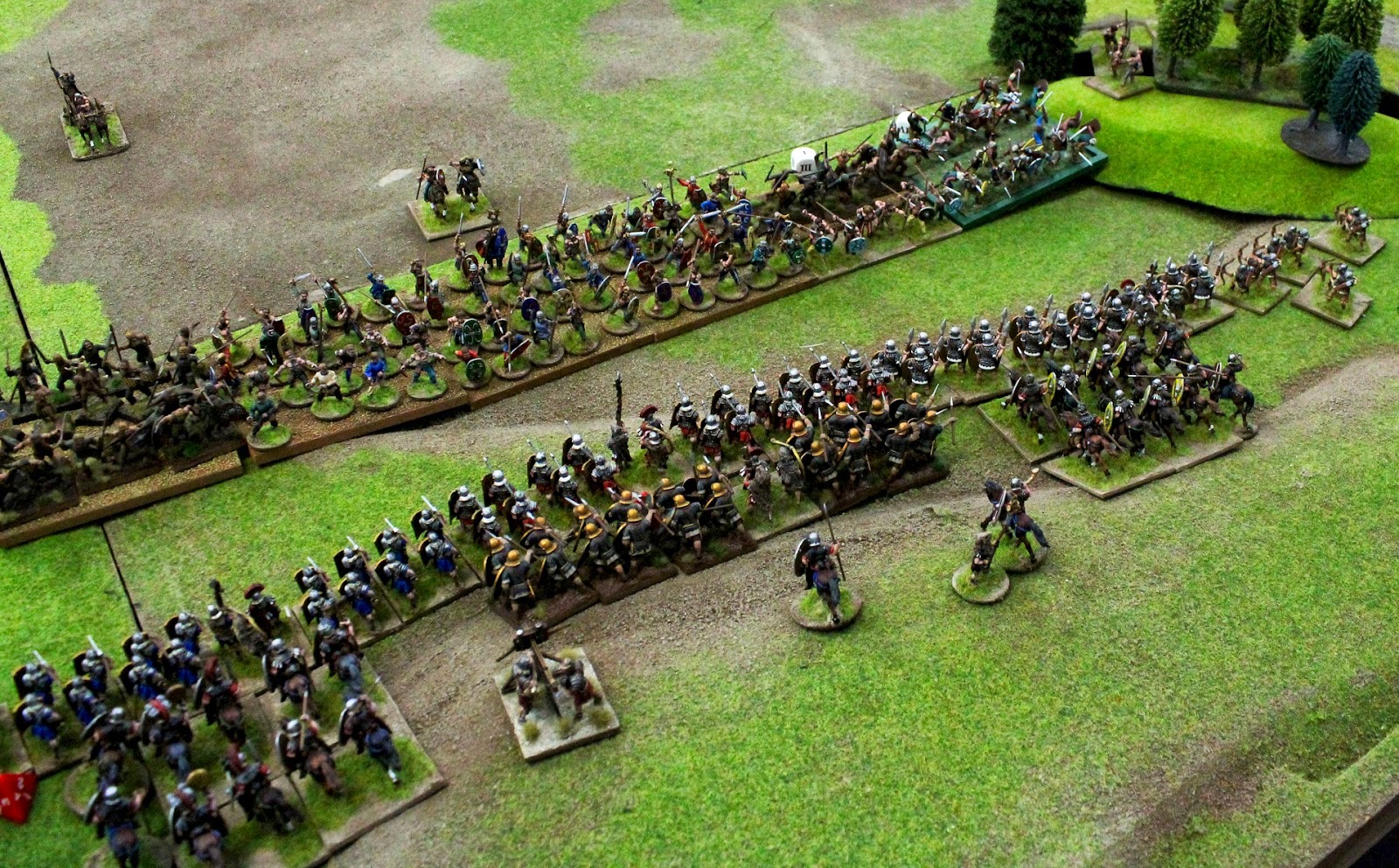 Today we played our annual Battle of Watling Street game at the Hall of Heroes, using Hail Caesar rules. 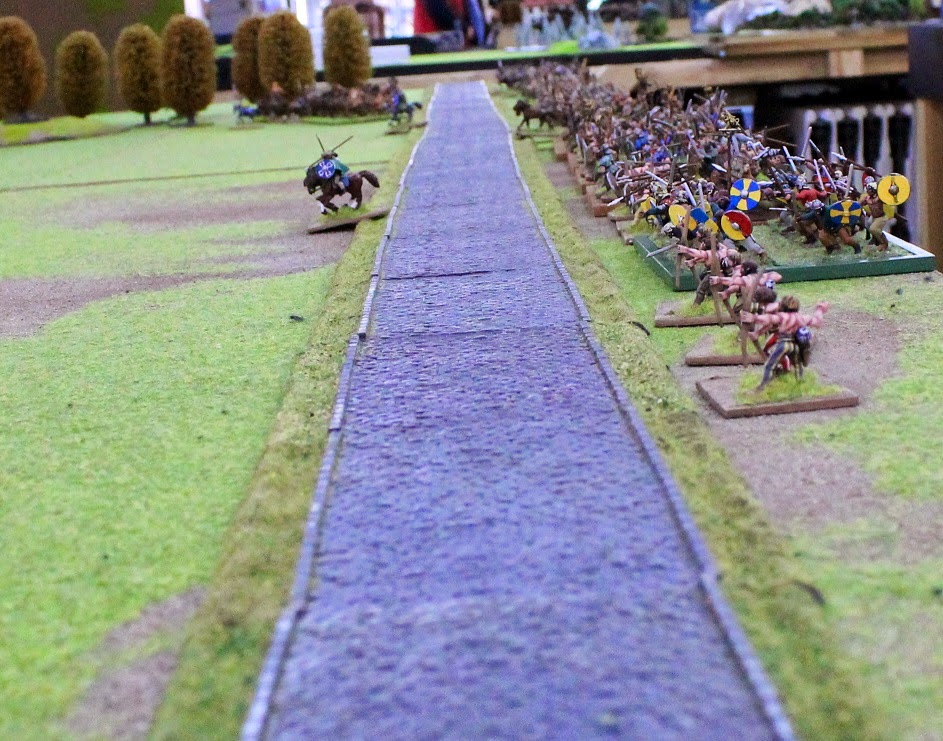 The eponymous street, 25mm scale Roman road from that excellent little Welsh company, Iron Clad Miniatures. Straight as! The table was all set up for us yesterday by our mate Terry, who alas had another wargaming engagement so couldn't be with us for this battle. Setting up the terrain for a game you're not going to play - how great a mate is that! Thanks Terry it was appreciated. We based the scenario generally on the Hail Caesar 'Britannia' supplement, which has a pretty convincing map of this mysterious engagement. Allow me to quote from the scenario as we set the scene....

The Battle of Watling Street 61AD – a Black Powder Scenario


A heavily wooded ridge overlooking the Roman Road since named ‘Watling Street’ has a clearing between dense forests on either side, providing space for an outnumbered force to take up a defensive upslope position with secure flanks. The woods on either side can only be penetrated by skirmishers. War bands are not permitted to break down into skirmish order to enter these forests.


An offensive-defensive battle set in the Boudiccan rebellion 61AD based on a larger Iceni and Trinovantian army of war bands attacking a smaller Roman force defending a hilly, narrow defile. 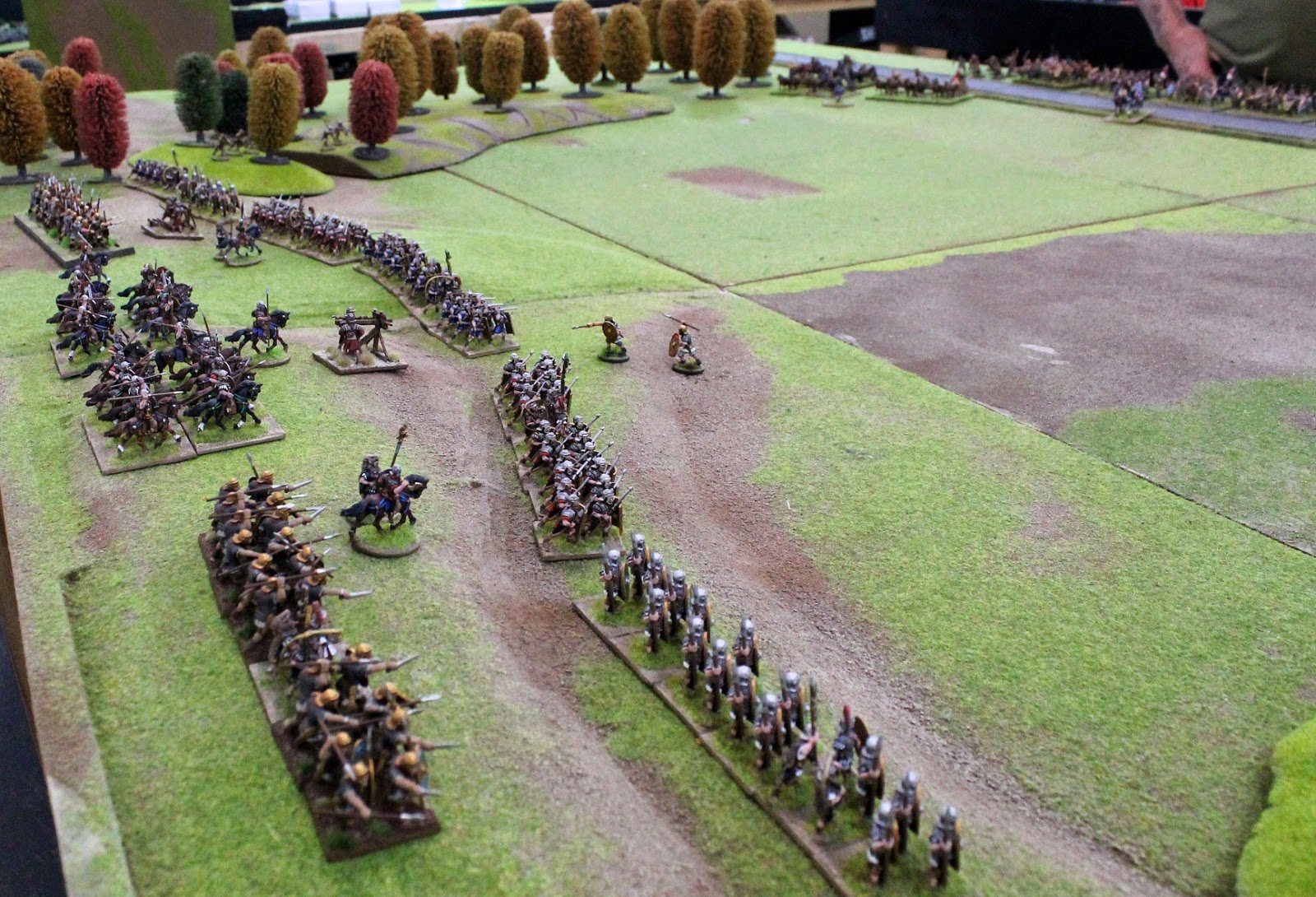 
After reaching agreement on relative force ratios, dependent on availability, the Romans will set up first, on the ridge line, able to post skirmishers in the forests to either flank if desired. The Britons will then set up opposite, no more than 1 foot in from their table edge. To offset our lack of British models, as well as nominating all British war bands as large, the British commander will have 3 options to sound the ‘Recall’ special house rule: 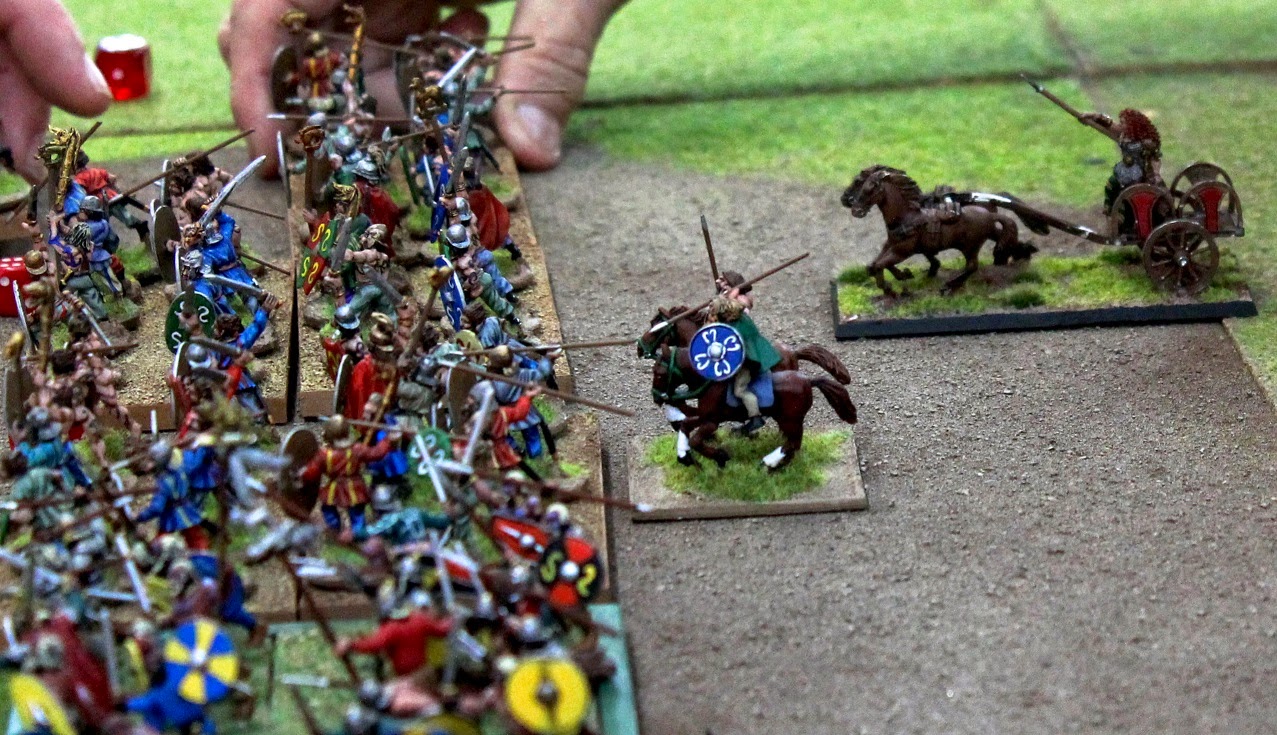 Sound Recall – at the start of the British move Boudicca may order her heralds to sound Recall on the Royal warhorns – the entire move is replaced by all British units moving back to the British start point. They remove disorder but retain stamina at Stamina -2, including units previously destroyed. This order may be sounded, at the start of the British move, thrice throughout the game, and replaces all other activity in that move, thus sacrificing a of the moves.
(Experienced chieftains will know that your main chance to beat the Romans is in the first surge of an attack, if they hold your first charge the law of diminishing returns soon starts to bite…)

Note – The ‘pigs head’ special rule has not been selected for this scenario as it came into force later in the Roman era. (Hail Caesar, p.103). The similar ‘wedge’ formation was contemporaneous, but its use is not recorded at this engagement. However its essentials are noted here should a particularly daring and aggressive Roman commander rashly decide upon its use:


Wedge Formation – Romans only. Free move on failed order. Counts ‘front’ all round to attacks and own ranged attacks, +1 morale save, cannot support nor be supported, can make own attacks all round, enemy giving ground to front are burst through, can make 3 moves when enemy break or are burst through. A wedge can only move forward. (Hail Caesar, pp.106-107) 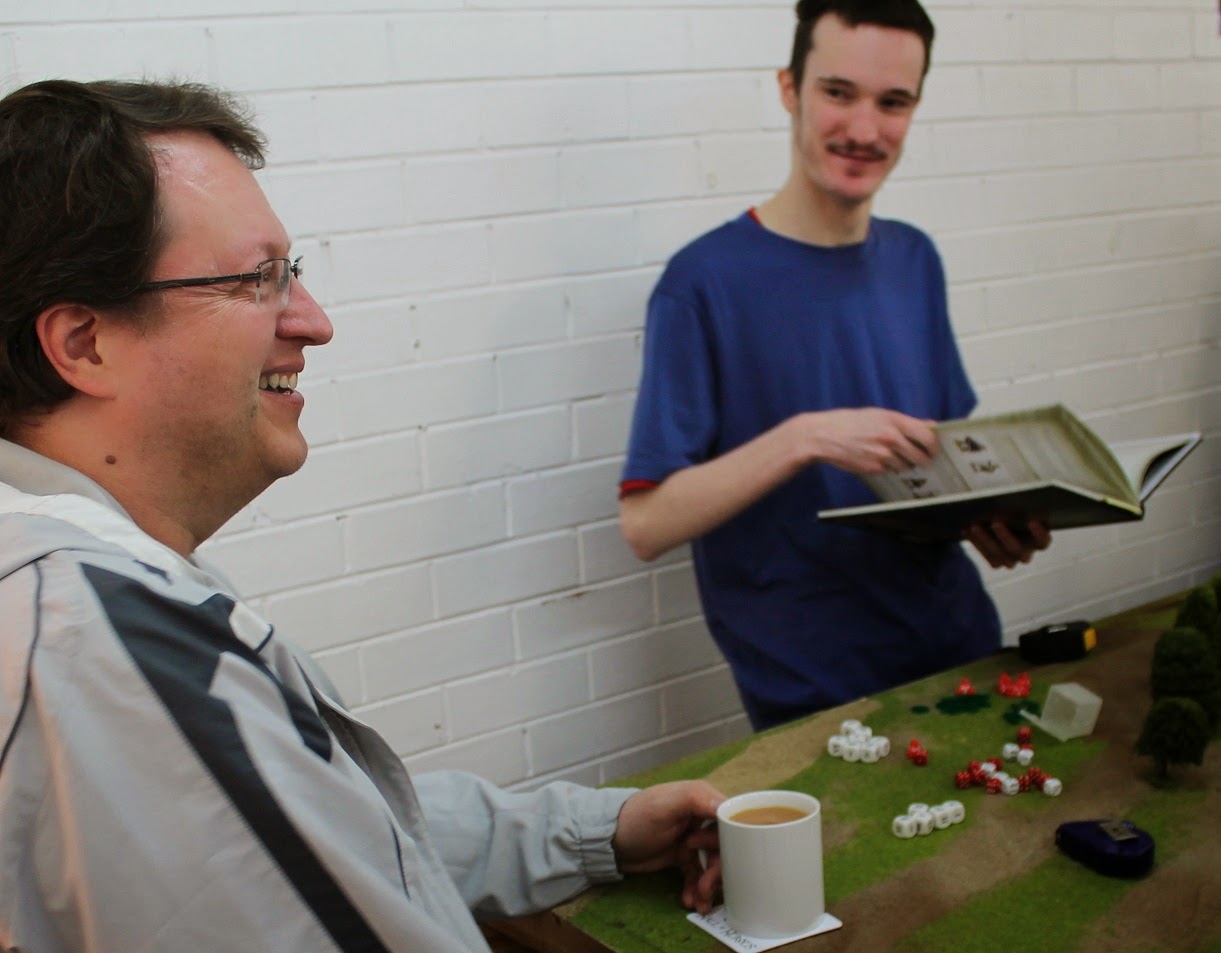 Service Support
An excellent selection of bistro style gastronomic delights are available from the shop – book early to avoid disappointment.


Drilled – Free move on failed order. Move through or out of way of friends without risk of disorder.


Pilum – Enemy -1 morale save in first round of every combat engagement (Note this is not included in the supplement troop stats, but is from HC page 103 and is used here as the effect of Pilums at Watling street was critical (Britannia, p.55)


Also see ‘Wedge Formation’ above if desired – and may the Gods be with you!

Boudicca, Queen of the Iceni      Leadership 9

Prince Tron of the Trinovantes   Leadership 8

As the Roman C in C I first set up the Romans in a rather loose formation, thinking to allow our cavalry room to launch disruptive attacks on the British masses as they moved across the valley below. However I was soon politely but firmly told by my Legate Thomas that this was the height of folly and that what was required was a good tight line with all Legion units shoulder to shoulder in mutual support... 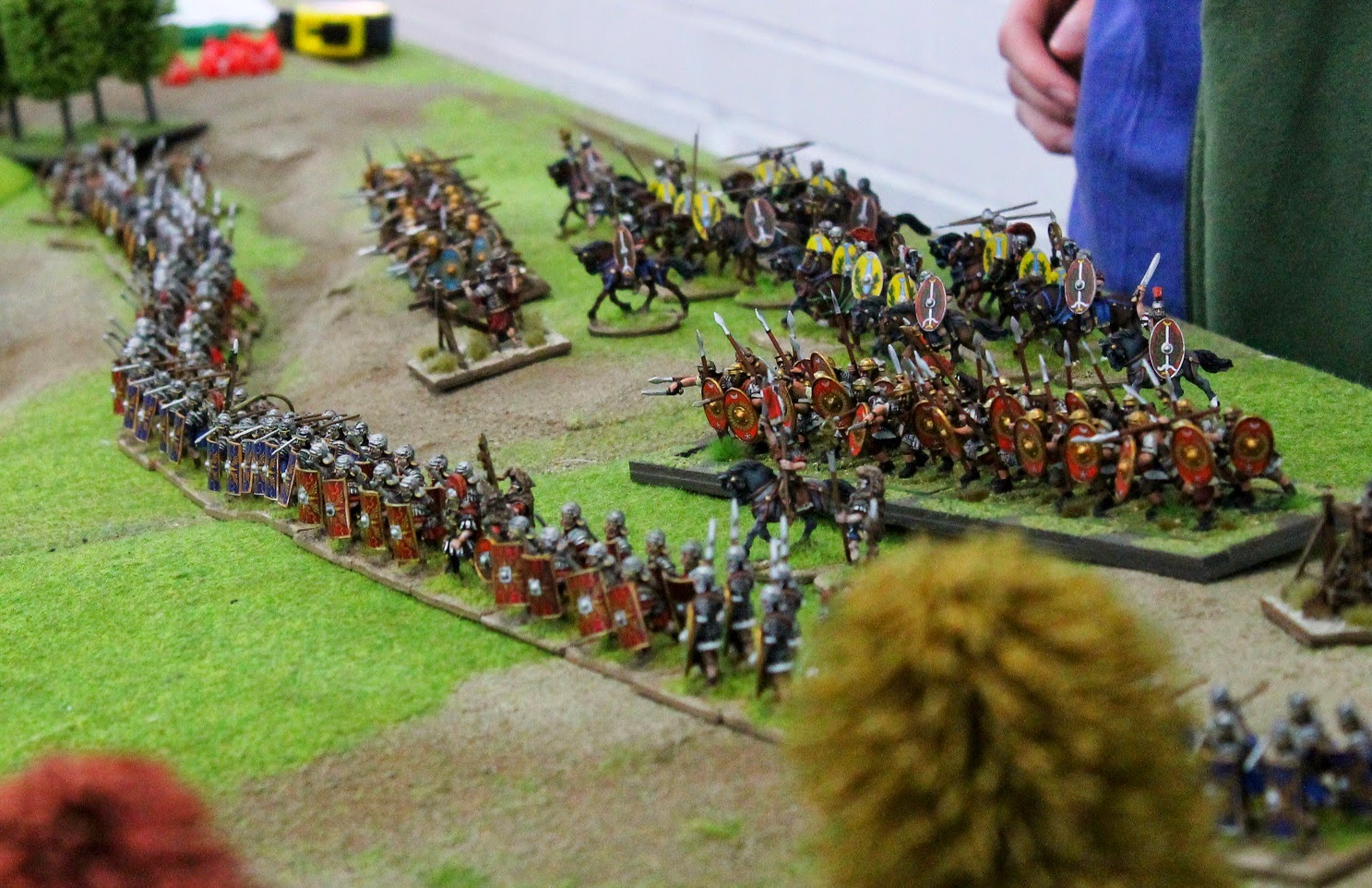 And how right he turned out to be... The game attracted a lot of interest from new faces, one of which volunteered to play, and Thomas emerged as an experience Hail Caesar player, which the rest of us are not, so I lost no time appointing him Legate!

The game started with the Britons attempting all out assaults all the way along the line - and the Trinovantes were up for it!

The Iceni warbands, half of Bodicca's army, however, were not - and this, in the form of Mark's unfortunate command dice rolling, despite working his way through nearly everybody's dice, was to persist throughout the game....

Of course we tried to sow discord by suggesting Boudicca was happy to fight until the last drop of Trinovantian blood, but our taunts fell on deaf ears and the tribesmen kept the pressure on: 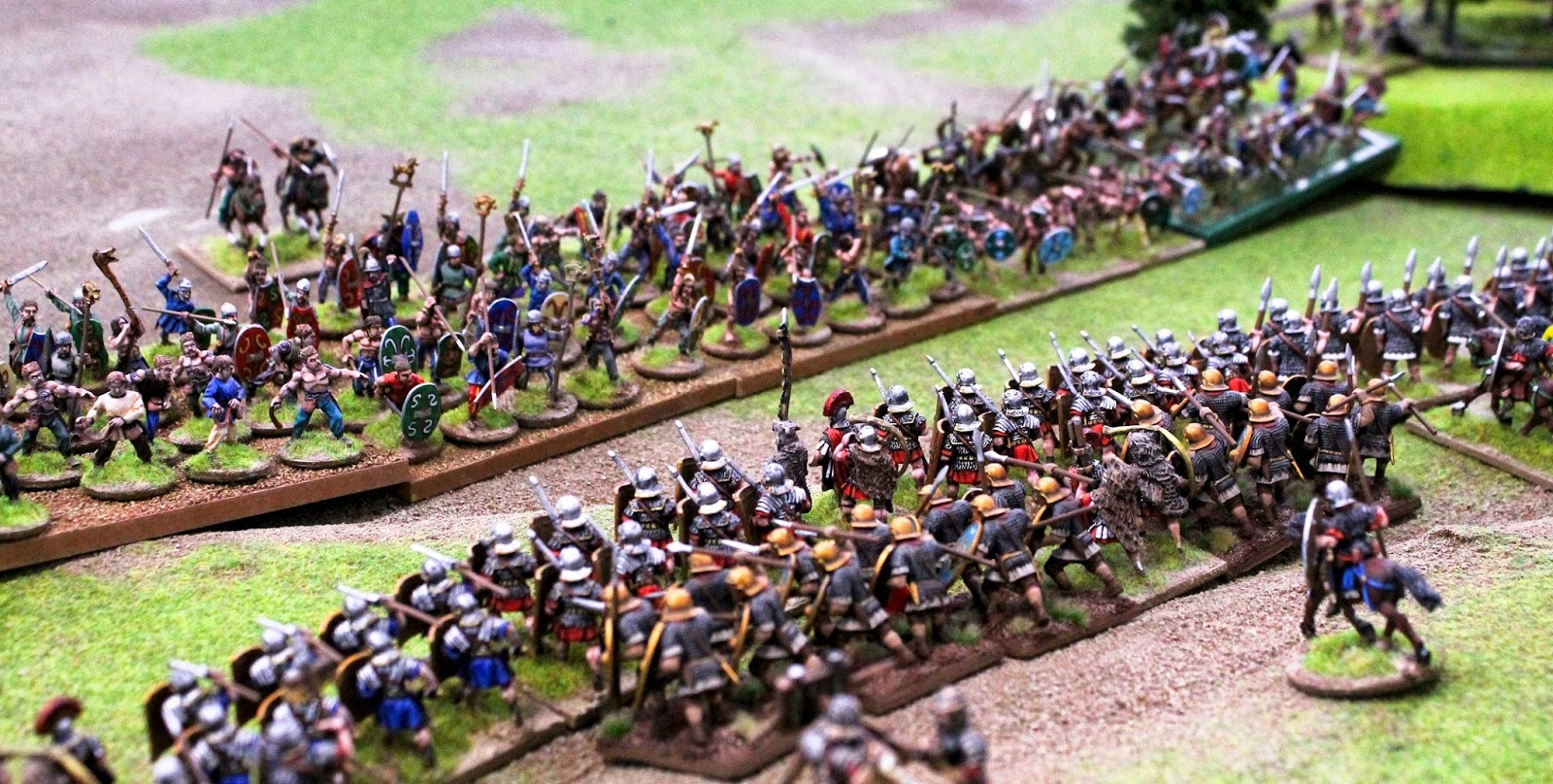 In fact considering the Britons were effectively fighting with half their army in the first wave of assaults, they did remarkably well, particularly as we forgot all about the 'Fierce Fighters' special rule! 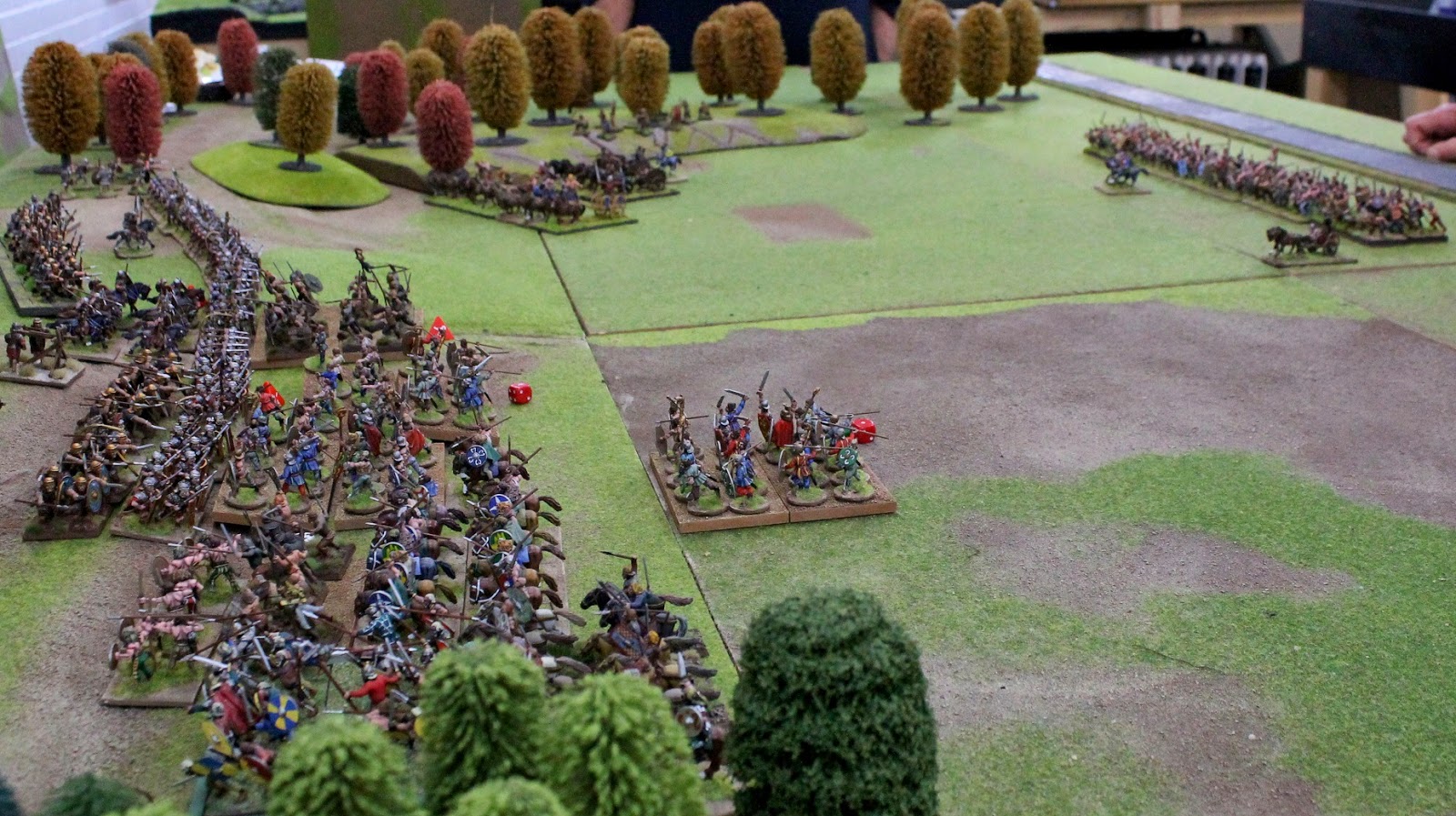 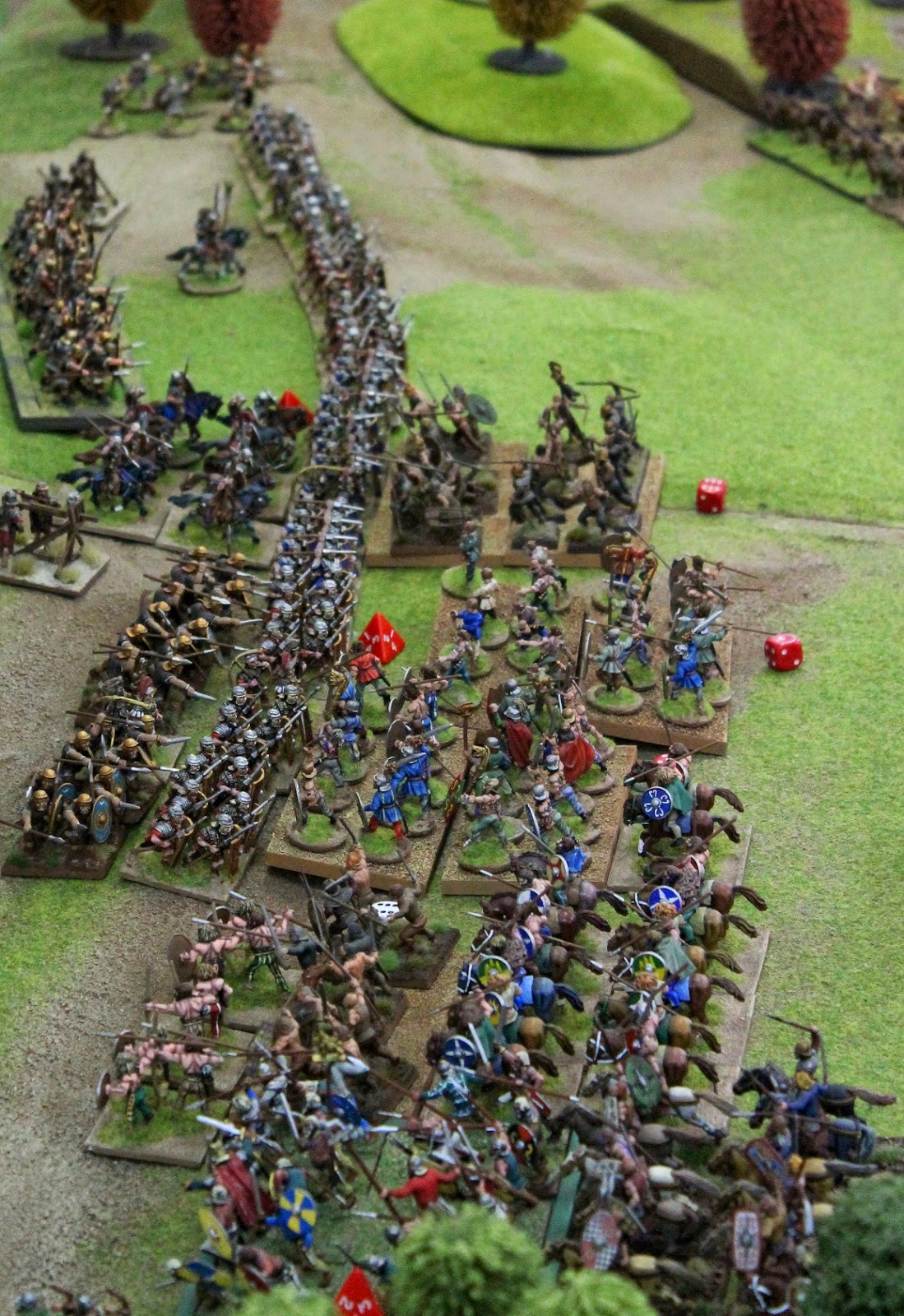 It was good to see that both sides maximised the use of supports in this first series of clashes, and for my part, having reserved the use of the cavalry to myself as overall Roman commander, I also used them to support the infantry, where there were insufficient Auxiliary cohorts to form a complete second line.

But what I suspect made the difference in recieving the fierce British onslaught was our discovery, thanks to Thomas, of the 'lock shields' rule, whereby heavy shield armed infantry can gain a +1 to their save, and the expense of a -1 to their attackes. A small thing, but seemingly crucial in this situation.

And of course the Britons were fighting uphill... 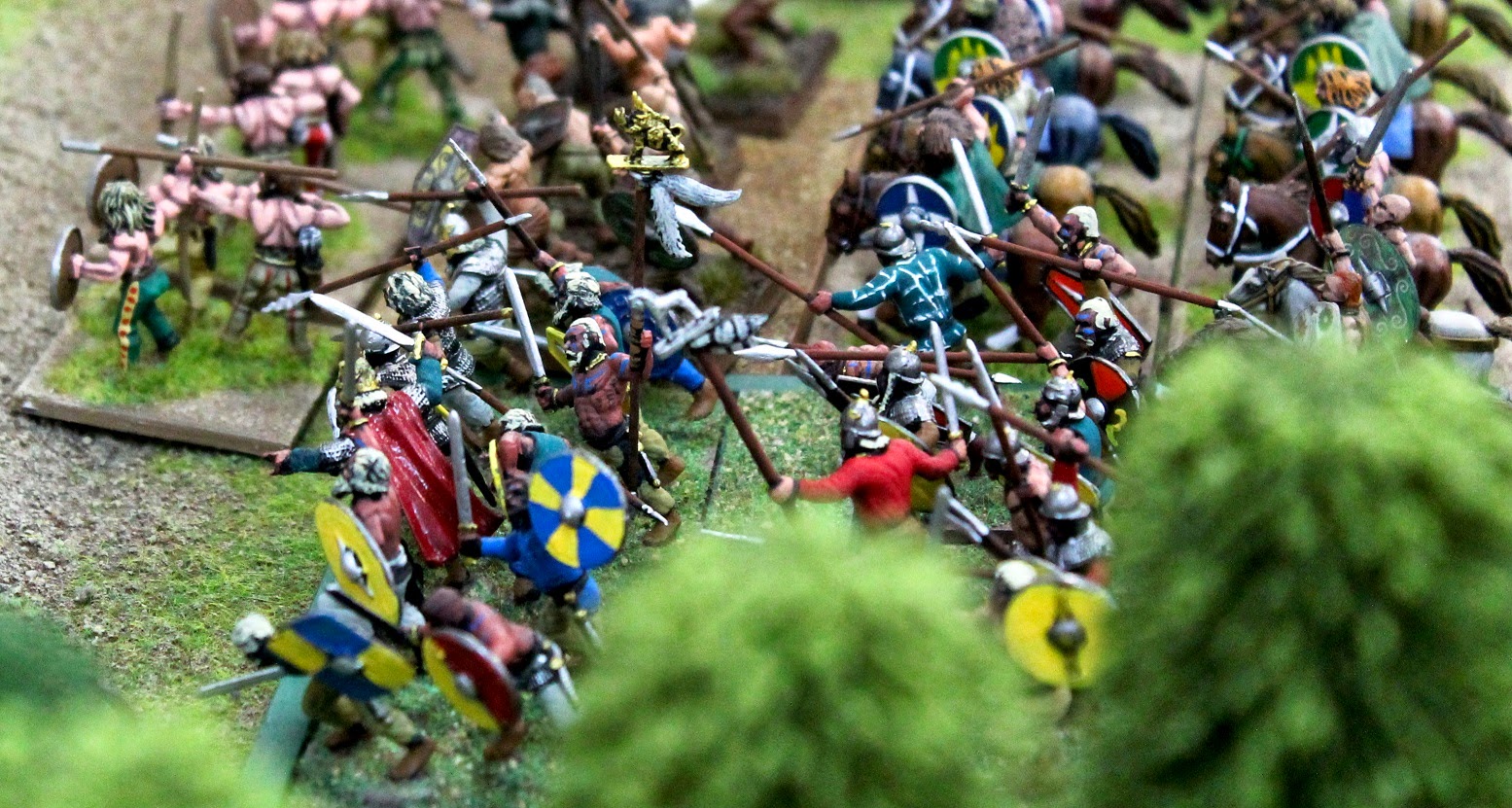 Eventually the Trinovantes ran out of puff and were clearly getting nowhere...

So Queen Boudicca summoned her heralds to sound 'Recall' and the gallant Trinovantes drew off from the sweating, bloodied Roman line and rejoined the fresh, and, one hopes, somewhat sheepish Iceni, to get ready to go in again...

The Romans made good use of this time to adjust the lines once again and rally off some casualties, and then awaited the next onslaught. To our delight yet again the Iceni seemed a little shy... 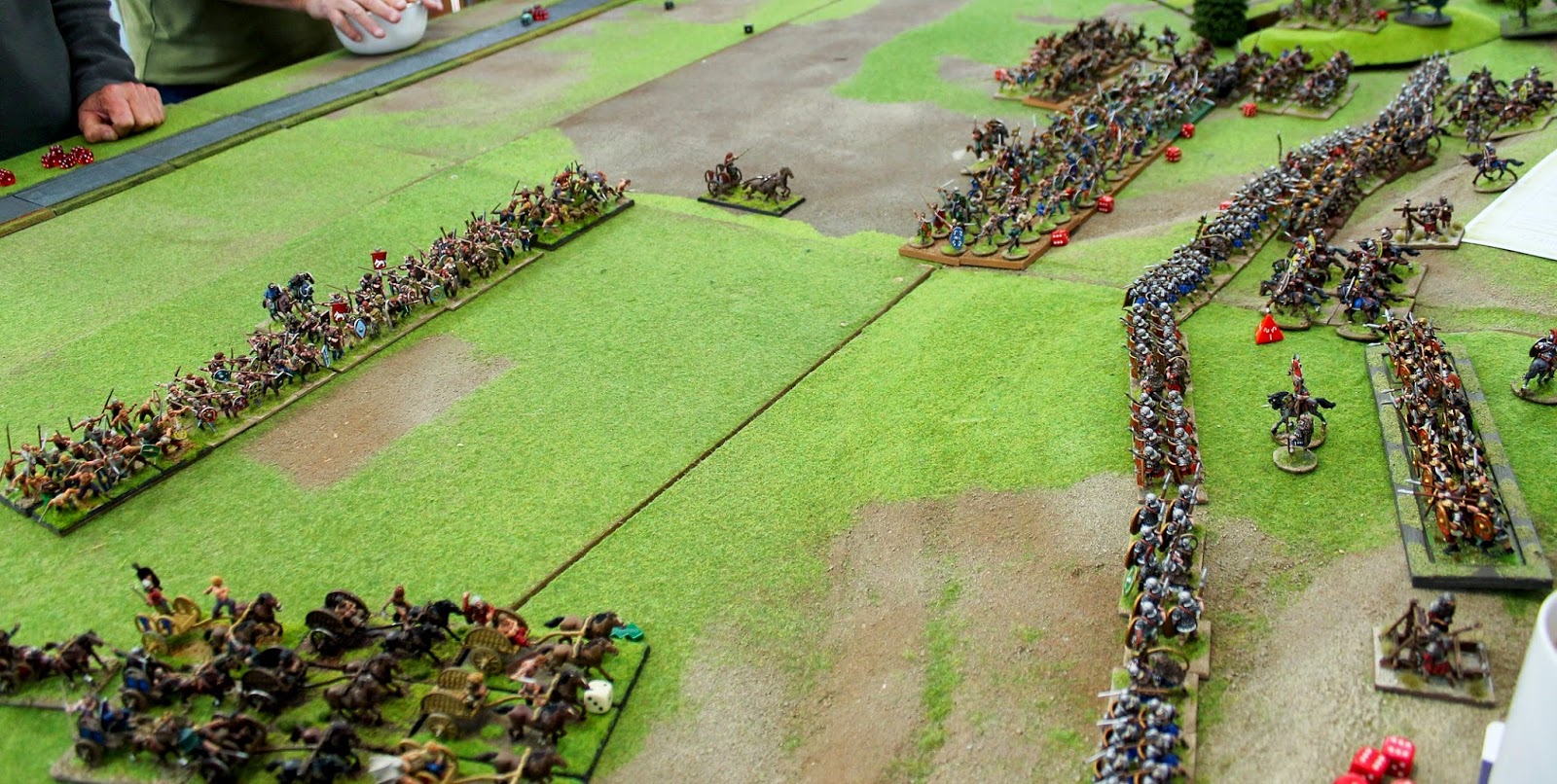 However, nothing daunted, Bryan the British cavalry and light chariots warlord was confident he could pressurise the Roman left flank with chariots alone... 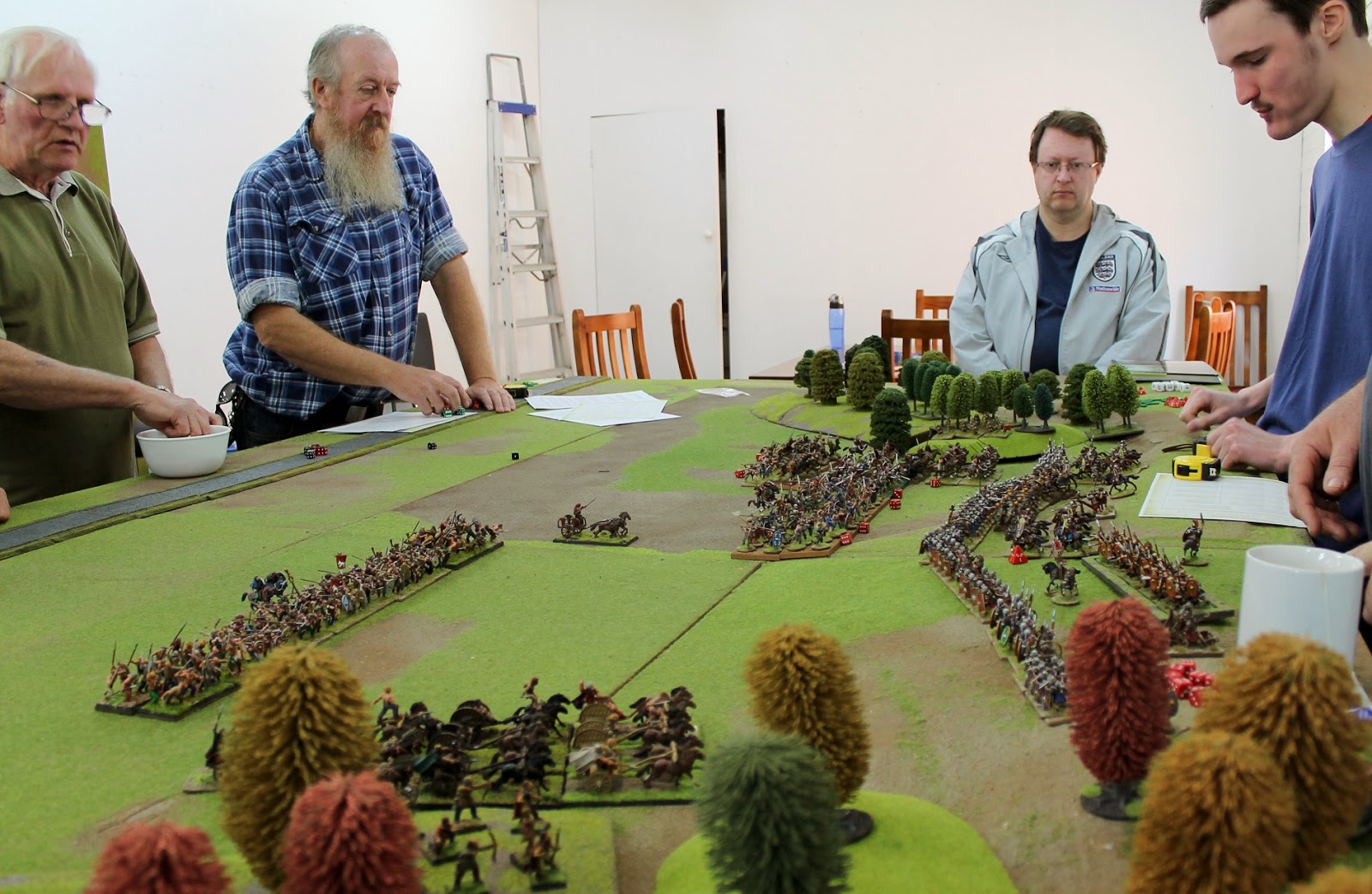 whilst continuing to use the light cavalry on the other flank to give the long suffering Trinovantes the edge. Unfortunately our cunning Legatus Thomas had prepared his archers in ambush... 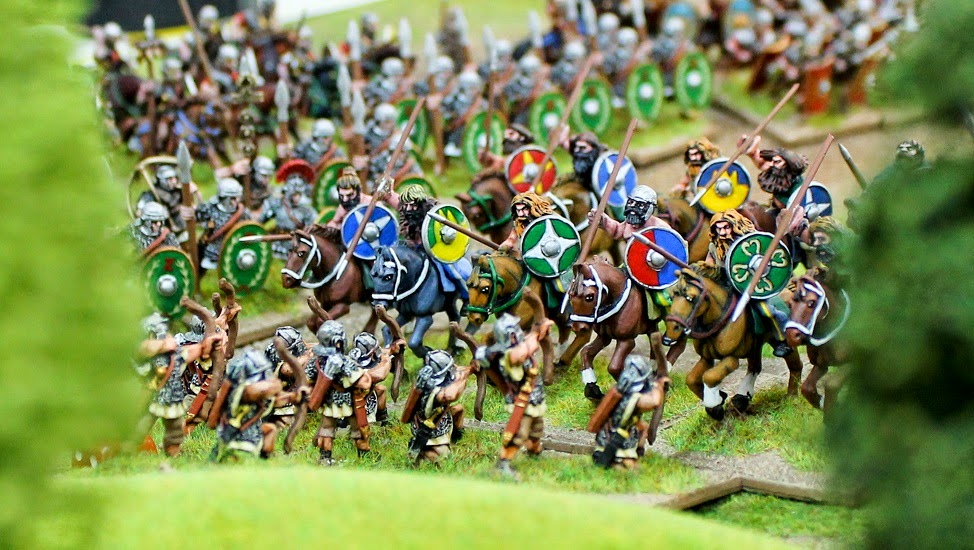 So while our right flank seemed to be holding - just... 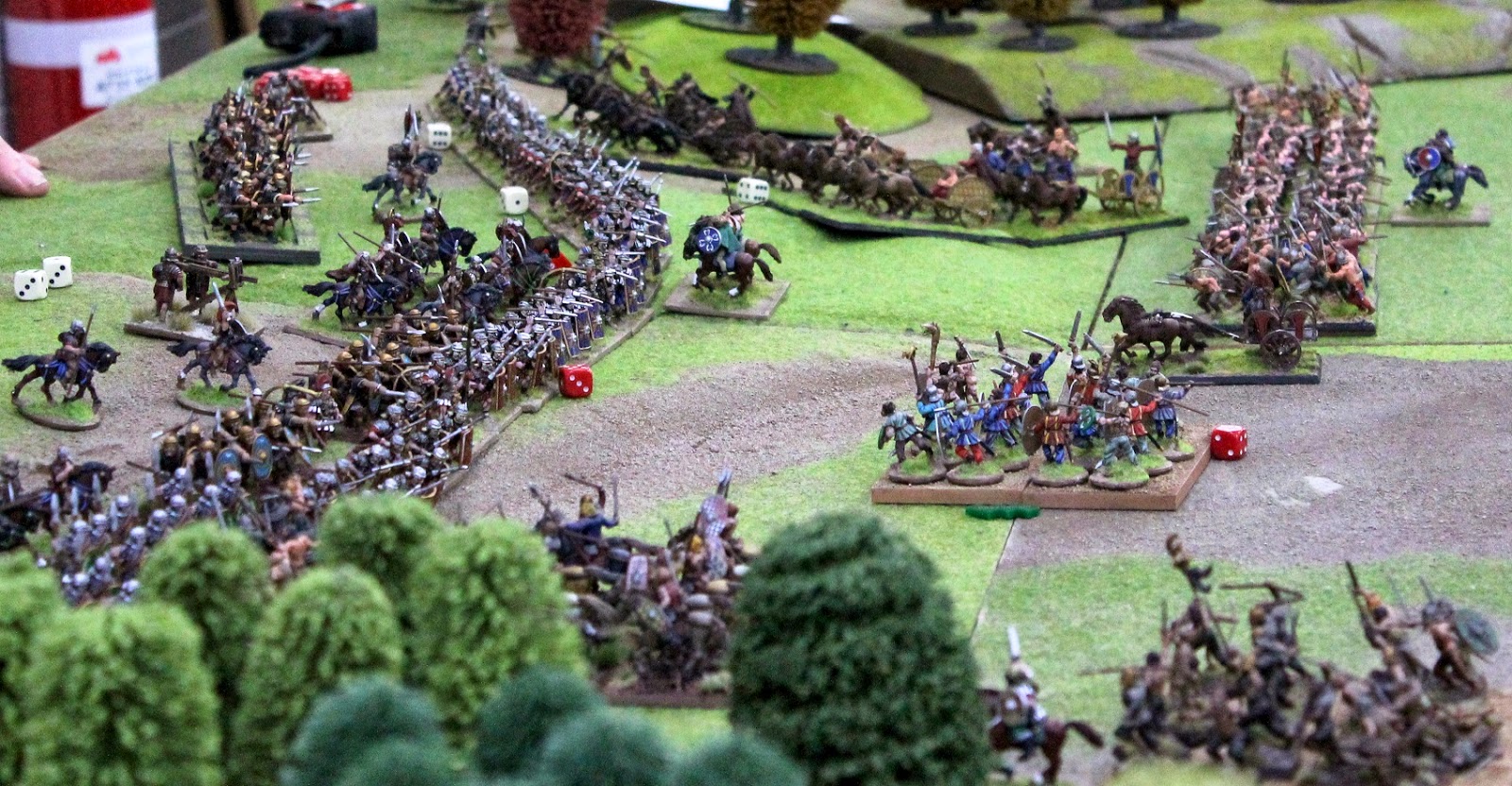 The use of chariots, now supported by the tardy Iceni, gave us our most dangerous moment... 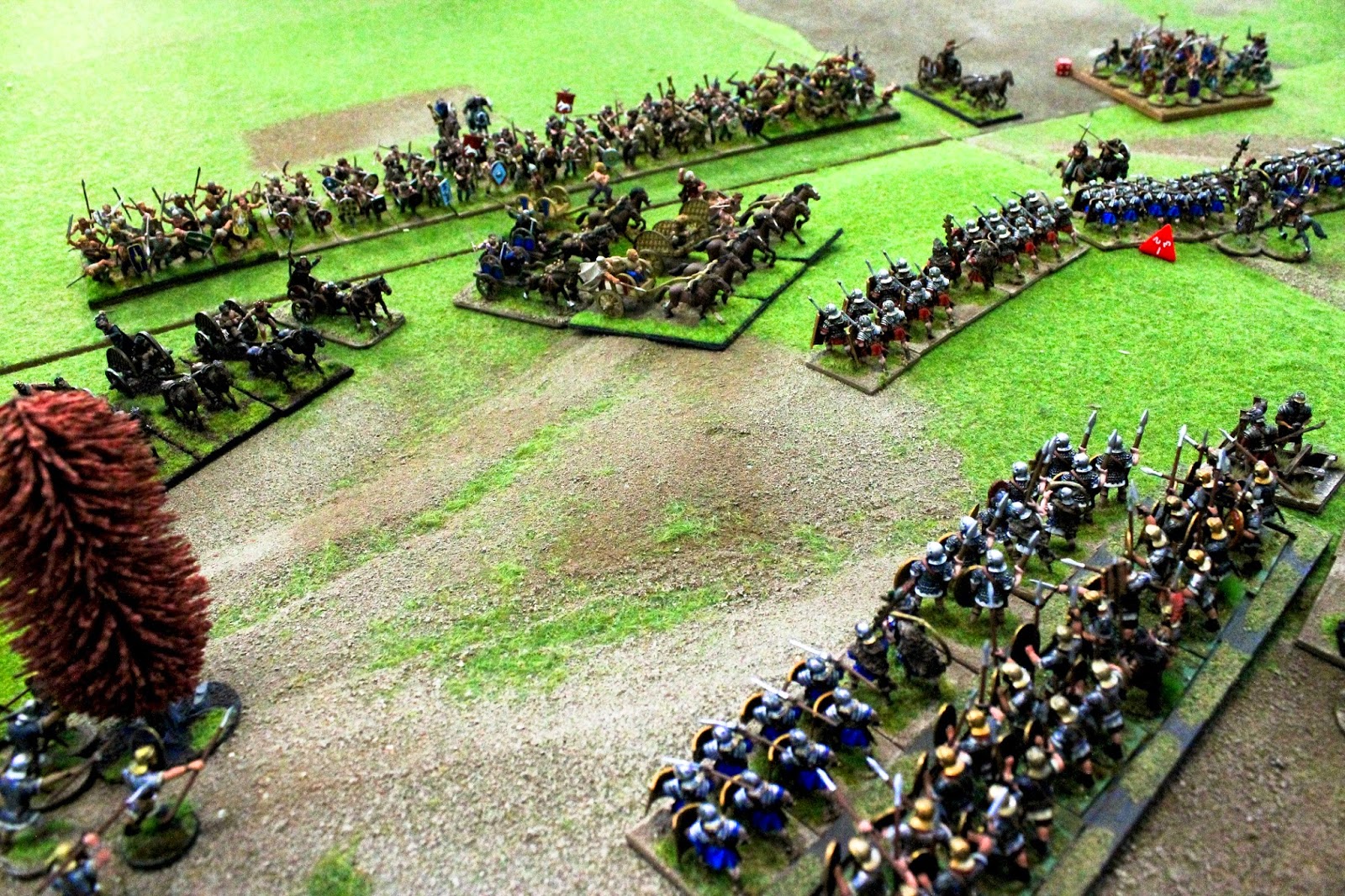 But the jusdicious use of Auxiliaries, I'm happy to say in this case my Cohors I Batavia, proved sufficient to stabilise the line...and the Britons had run out of time to change the course of history...

Posted by Sparker at 15:34
Email ThisBlogThis!Share to TwitterShare to FacebookShare to Pinterest