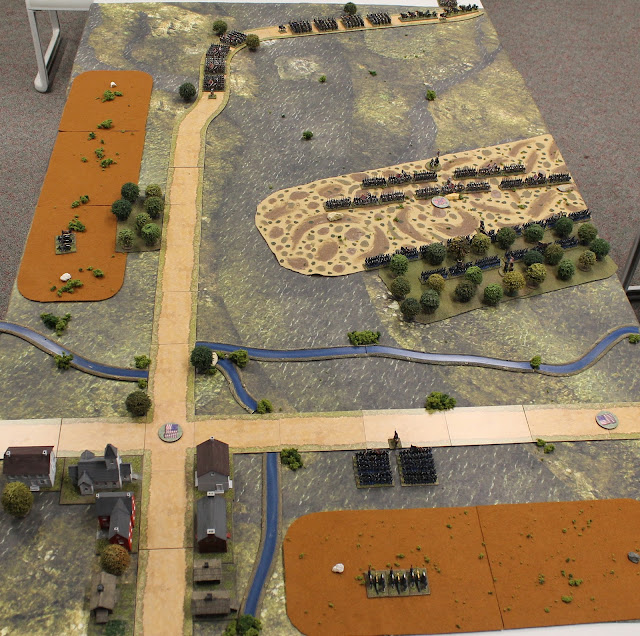 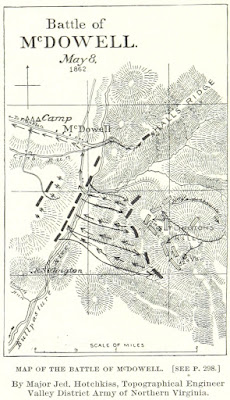 On Thursday evening the Wollongong Wargamers played the next game in our 1862 Shenandoah Valley Campaign: the Battle of Mcdowell. Once again Stonewall Jackson's strategic genius has concentrated overwhelming force against a small part of the outnumbering Federal armies!

He has trapped a couple of Union brigades in the indefensible village of McDowell, surrounded as it is by high ground. But he has not bargained for the aggressive Federal commander, Gen. Milroy, who has determined upon a fierce spoiling attack at dusk to allow his brigades to escape encirclement once darkness comes...

Devising the Victory Points for this, the first scored engagement of the campaign, was challenging. How to encourage the Union team to attack aggressively, yet breakaway in good time to effect their retreat? 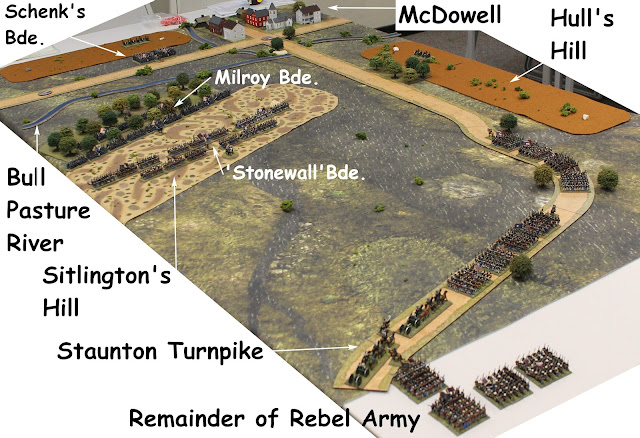 The game commences with the lead Rebel brigade lining Sitlington's Hill, which Jackson deemed impassable to artillery. Skylined against the setting sun, they are a prime target for Milroy's Bde which has lined the timber line at the foot of the slope. These will get a +1 bonus to their shooting, whilst the Rebels, underestimating the steepness of the slope, are under a -1 penalty to reflect their shooting high.
Milroy's Staff Rating, exceptionally for Union Brigadiers, is 8 and is further bolstered by his Aggressive attribute, which gives him a +1 when giving a Charge! order. Schenk is SR 7, all Reb Brigadiers on 8. Jackson, SR10, is Inspirational as per Glory Hallelujah! and so units in proximity get to re-roll failed Break tests. This was to prove important!

The remaining Confederate Brigades will arrive later, wending their way down the Staunton Turnpike, guns well to the rear. By contrast, the Union batteries are making good use of high ground to dominate and enfilade Sitlington's Hill.

Victory Points for this game were a bit of a mess. One for each broken brigade, naturally, but even here the uneven nature of the Federal force necessitated a fudge. 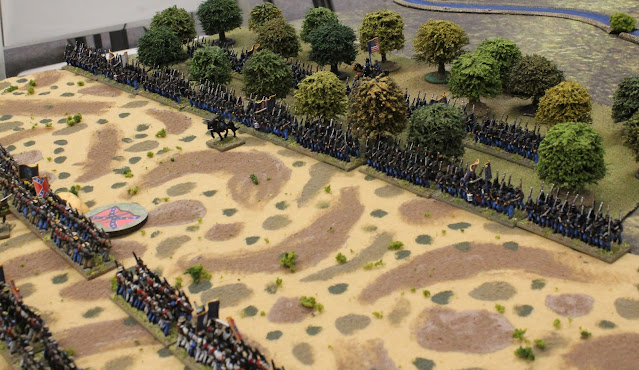 Schenk's Brigade of two regiments was merged with Milroy's bde. of five, for a total 'army breakpoint' of four units lost or shaken. 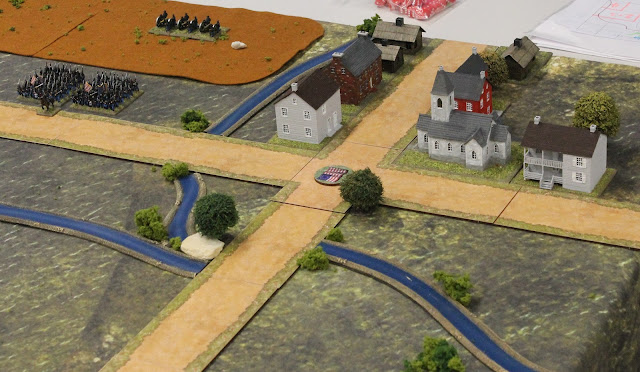 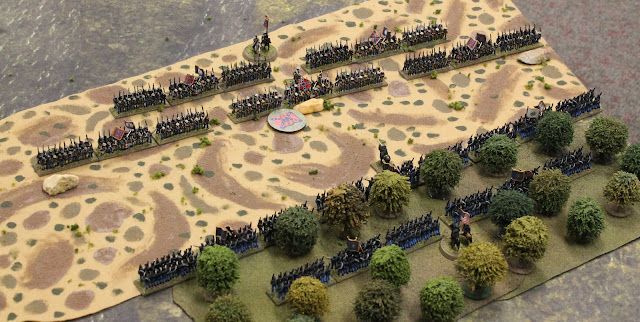 Initially, Milroy's brigade opted to remain in the tree line and make full use of their advantage in musketry to discomfort the Rebs...but as the objective was ticking down towards defaulting to the Confederacy they broke cover and advanced to close range. Their firepower forced the Rebs to re-roll several break tests, Jackson's leadership holding the brigade together under withering fire. Inevitably though, a grey clad regiment broke under the murderous fire and the Bluebellies advanced onto the objective. 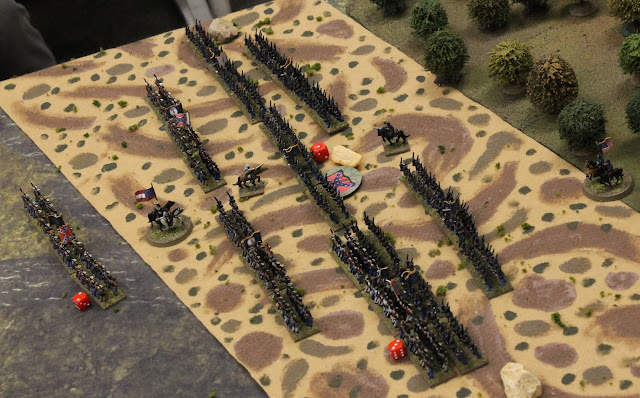 Fierce counter-attacks aiming to regain the objective were launched, but Union closing fire caused them to go in disordered, with predictable results. But now, driven back from the crest, the Confederate fire was also taking its toll, and the Southerners were able to retake the objective through fire and manoeuvre. 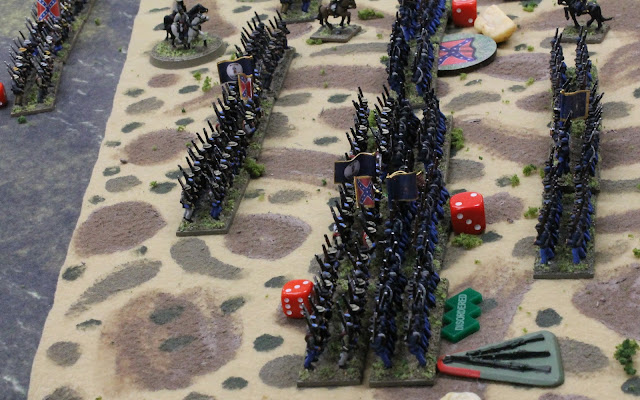 And by this time the rest of the Confederate forces were advancing towards Schenk's tiny brigade. Would the rebels also seize McDowell itself? 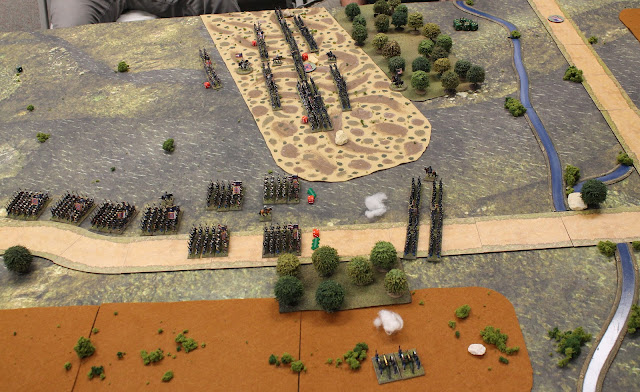 Schenk's small brigade, well supported by the Union guns, also decided that attack was the best form of defense and advanced to meet the Rebel onslaught... 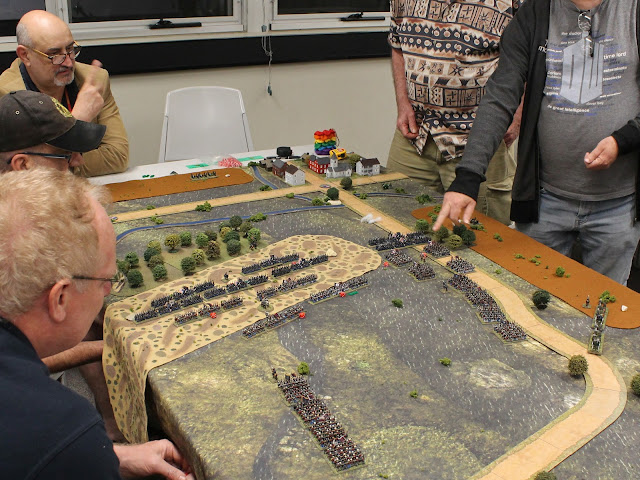 The resulting hand to hand combat was fierce... 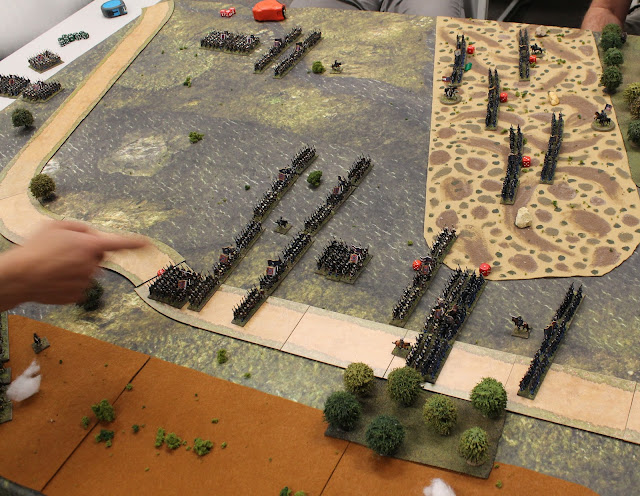 And the tiny brigade achieved some early upset success on the turnpike, just at the point their colleagues up on the hill succeeded in breaking the Stonewall Brigade! Victory Points were now even at one each... 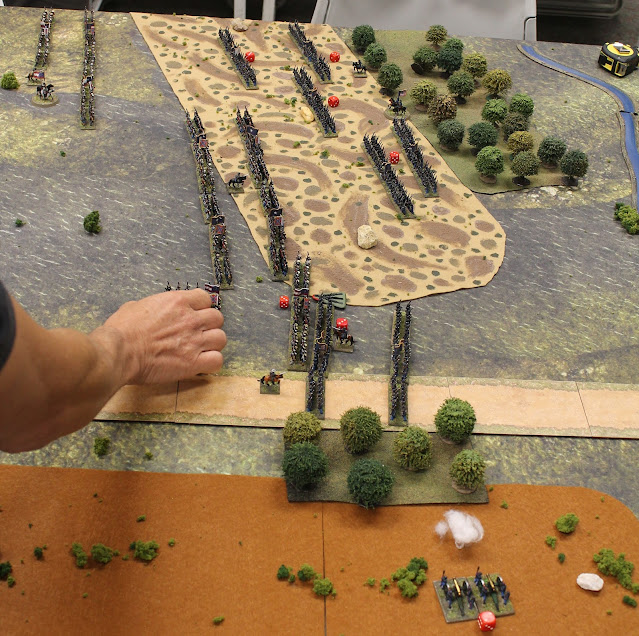 However, the rest of the Confederate army was now making its presence felt, and it was the Union army, as a single combined brigade, that now broke! 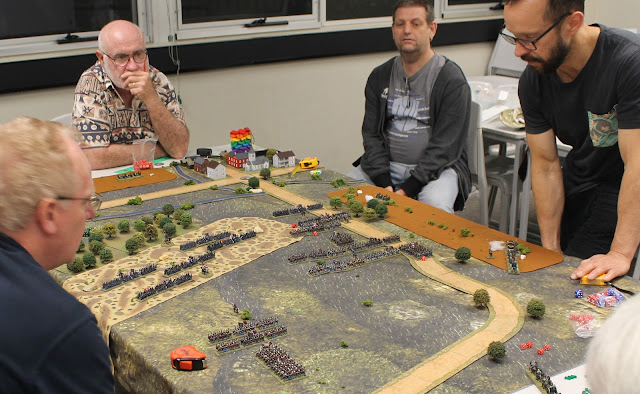 So the campaign has started, with 2 Victory Points to the Confederacy and 1 to the Union. This result however doesn't do justice to the level of play shown by the Union team, who after all had a tough mission against such odds!

In the throes of moving house, I only had a 4 foot square table, but I simply had to have a short game for sanity's sake! 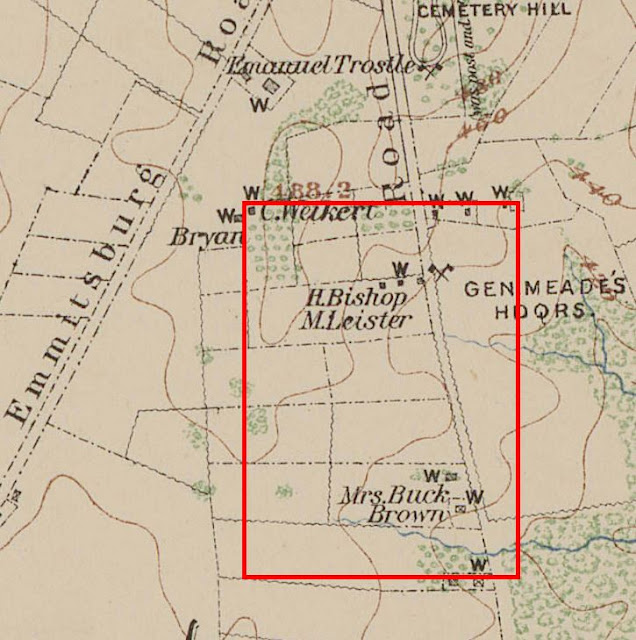 I used the challenge to model a small section of the Gettysburg battlefield, roughly 1/4 mile square around General Meade's HQ.

No particular scenario in mind; the Union are ensconced along Cemetery Ridge. 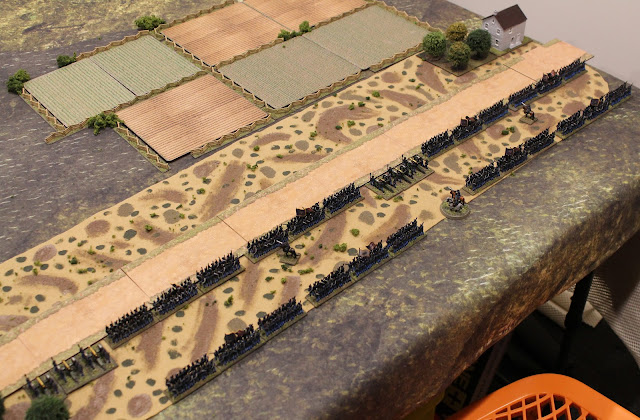 The Confederates are going to push them off it or die trying!

To achieve this, the Rebel arty is going to have to silence the Union guns...

Unfortunately of their two batteries, only one is of six guns! 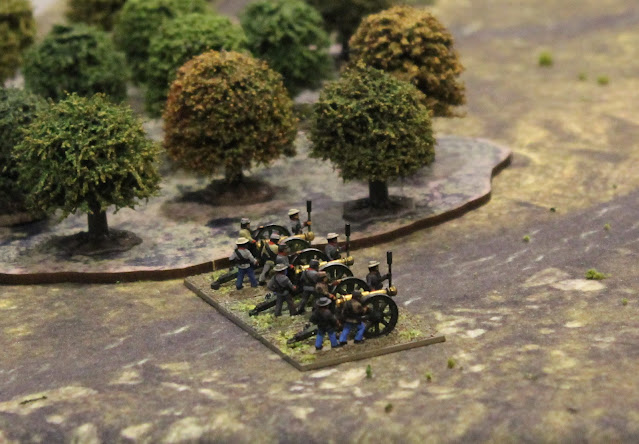 Given the Union batteries are sheltered by the Cemetery Ridge crest, the Reb redlegs need sixes each time... 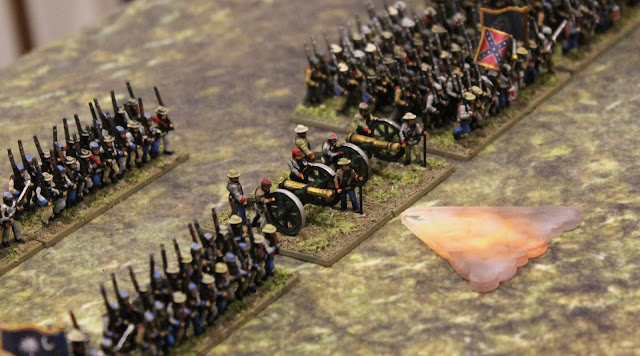 The Rebel artillery bombardment continues to be underwhelming - at this rate the Yankee guns won't be silenced until dark.... 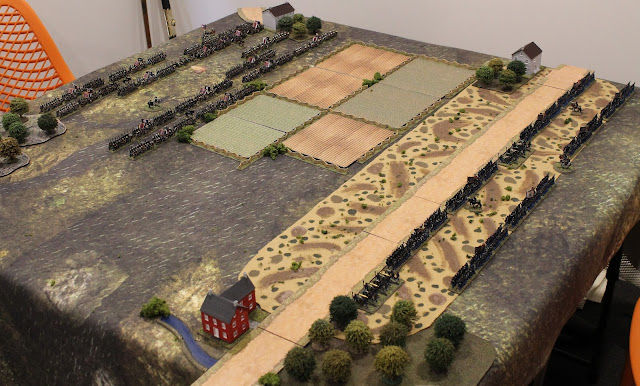 The Confederate infantry decide to advance anyway...they make a bit of a hash of their deployment...

But the left hand division makes good progress in to light cover...

Too light - the US artillery disorders the lead brigade!

The Corps advance will now make contact in fits and starts...

By the time the rebs are climbing up Cemetery Ridge, one Regiment has already fallen out... 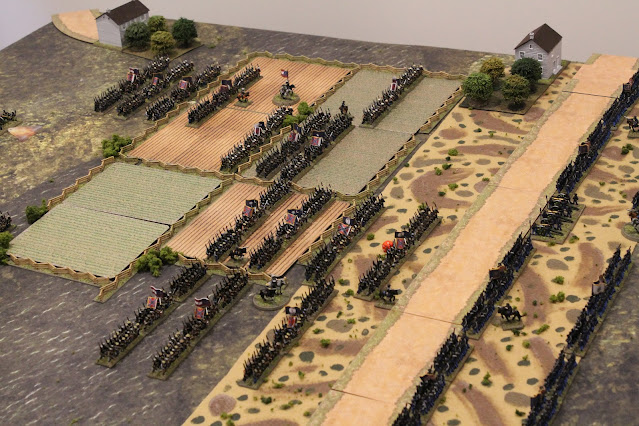 The remainder press on, tensing to recieve yankee small arms fire as well as canister... 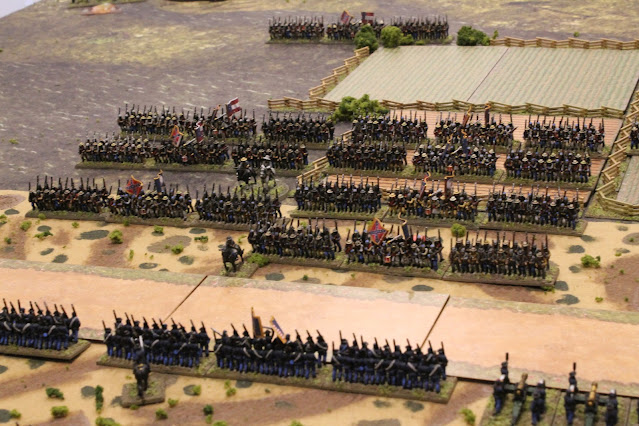 An entire regiment is broken by this close range fire... 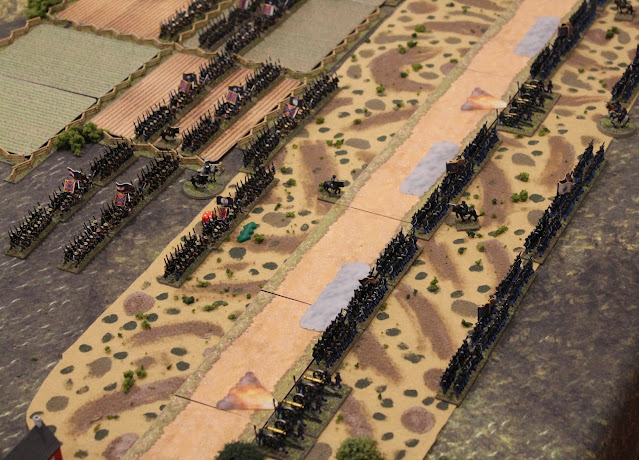 Nonetheless, the survivors charge forward with a Rebel Yell!

The first round of combat is a draw!

Buoyed up by their more numerous supports, the Union brigade wins the second round of hand to hand combat. 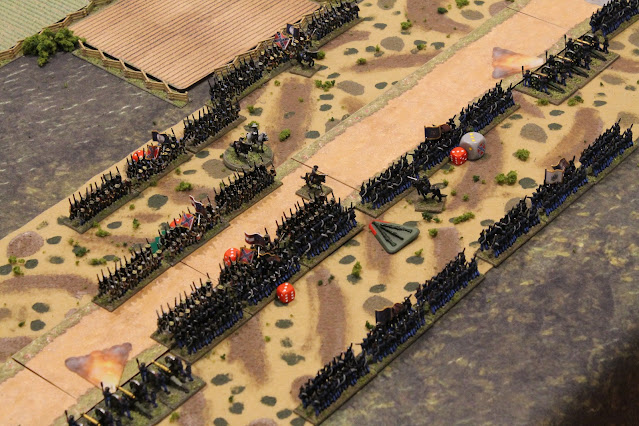 Flayed by canister and musketry, unable to continue with anything other than piecemeal attacks from the disordered advance, the Rebels fall back...
A small and quick game, but sufficient to test my 'ground scale' - a grandiose term for my fudging - that 1/4 mile to 4 foot seems about right for Epic...
Posted by Sparker at 23:47 8 comments:
Email ThisBlogThis!Share to TwitterShare to FacebookShare to Pinterest
Labels: ACW, Black Powder, Epic
Older Posts Home
Subscribe to: Posts (Atom)