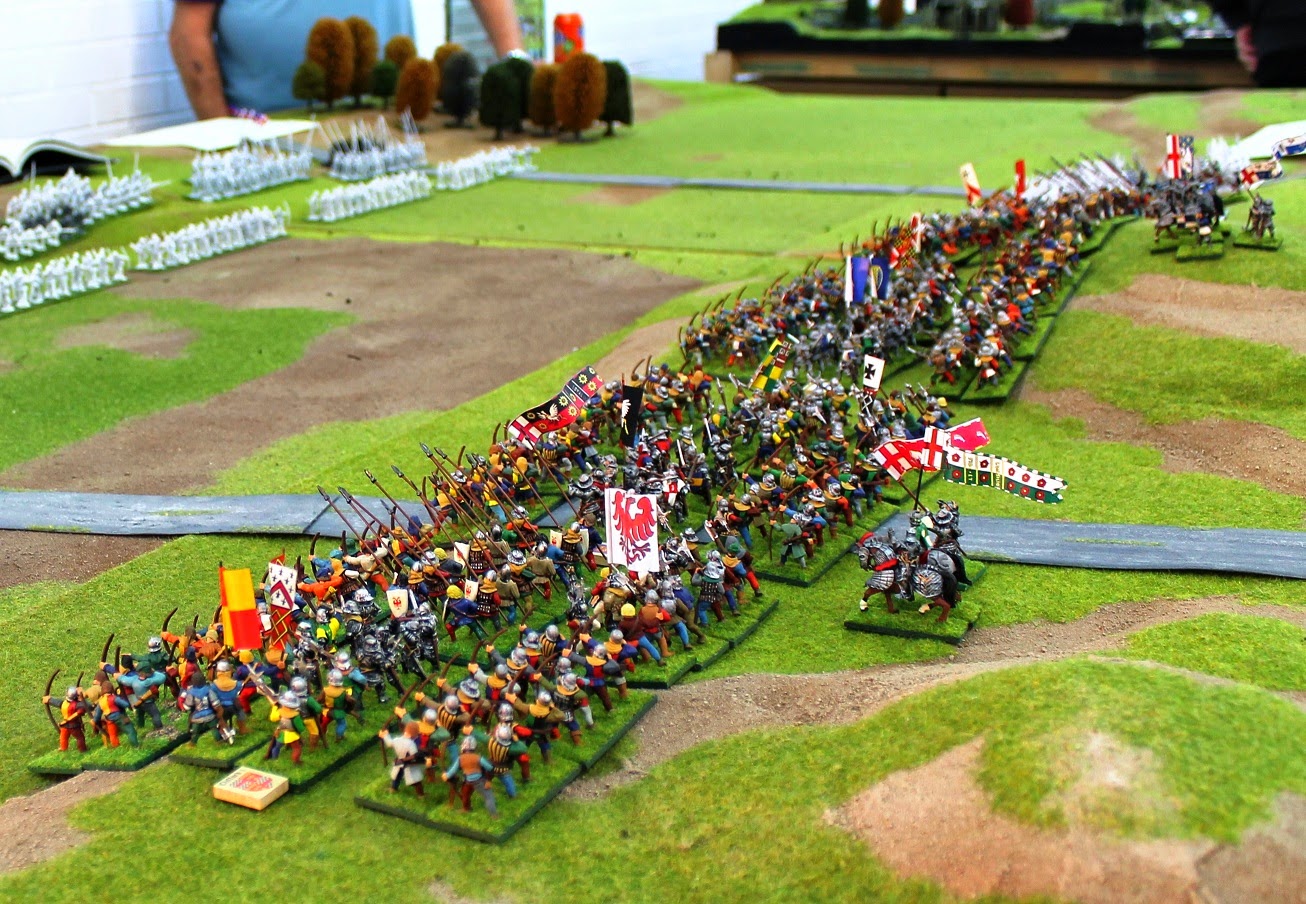 Normally I wouldn't post a batrep where the majority of photos are of unpainted figures - this great hobby of ours is primarily visual so why bother? And by the time we get around to playing this game again, probably next year, I hope the majority of figures will be painted!
﻿
﻿But wargaming isn't just about playing with prettily painted toy soldiers - as well as good fellowship, its also about the history, and the thrills and spills of pitting your wits (and, fortunately for me, those of your team-mates!) against the opposition! So forgive me for chronicling this less than stellar looking game, as it was one of the most enjoyable and challenging wargames I've had in a while!

Towton was, according to the subtitle of the excellent Osprey Campaign series, 'England's bloodiest battle'. Fought in the bitter and snowy winter of 1461,  the larger Lancastrian army, ensconced on a good defensive ridge, was stung into coming of their advantageous ridge by the smaller Yorkist army's archers, who employed the strong following wind to cause unendurable casualties on the passive Lancastrians.
A long and hard fought melee in the valley continued for most of the day, a cunning Lancastrian ambush failing to deliver much advantage, until the arrival of Yorkist reinforcements, led by the Duke of Norfolk began to turn the tide, with the Lancastrian line beginning to ebb away, eventually turning into a bloody rout. 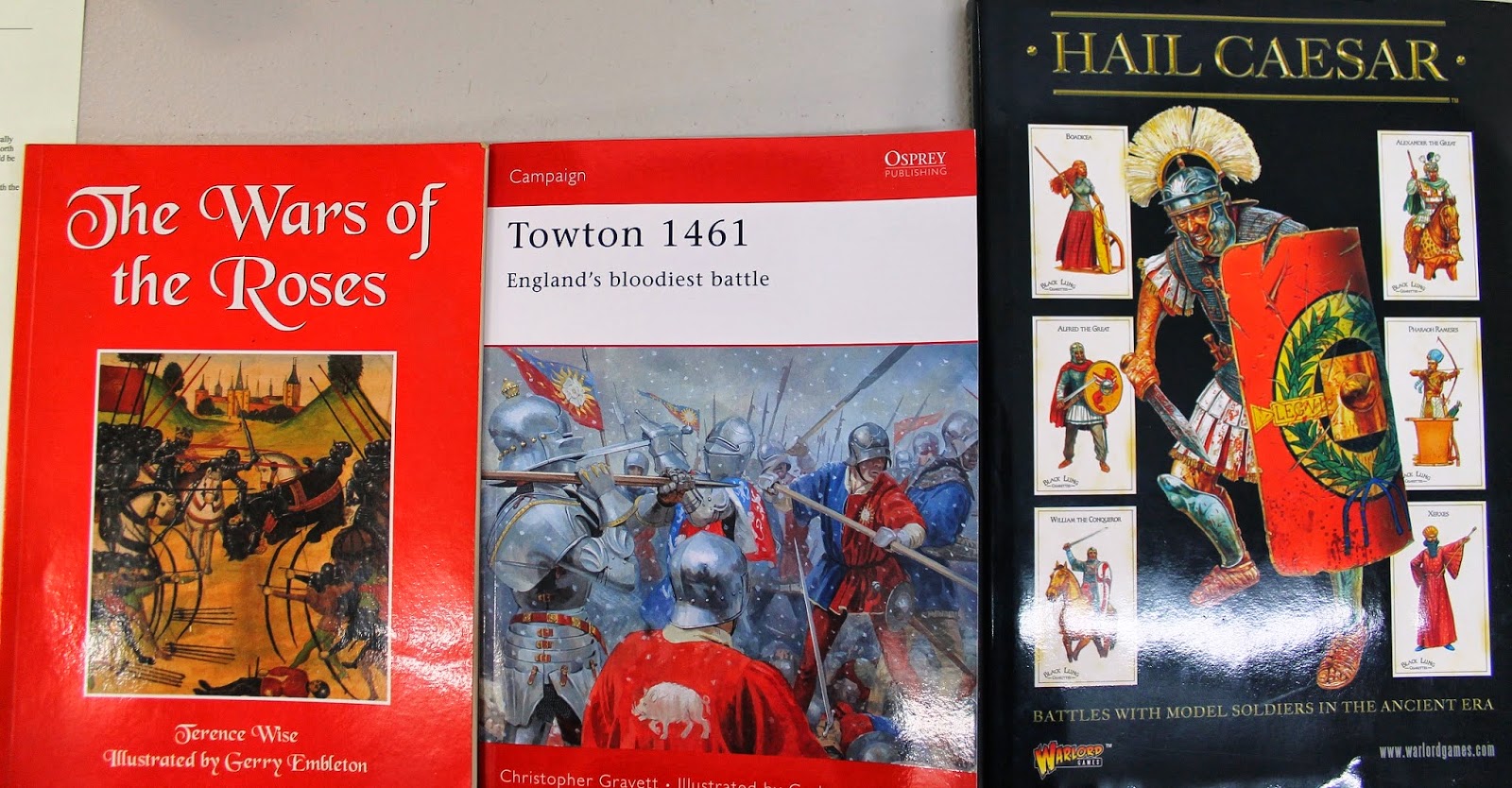 Philip had carefully worked up the battle into a Hail Caesar scenario for the 6 of us to play. True to what we know of the history, the larger Lancastrian army was drawn up on a ridgeline, but with a small detached force of spearmen concealed in woods on the Yorkist right (Western) flank, with orders to spring the ambush once the lines had started to clash. We the Lancastrians knew that we could expect the enemy reinforcements to appear on our left (Eastern) Flank, but knew they couldn't arrive in the first 3 moves. 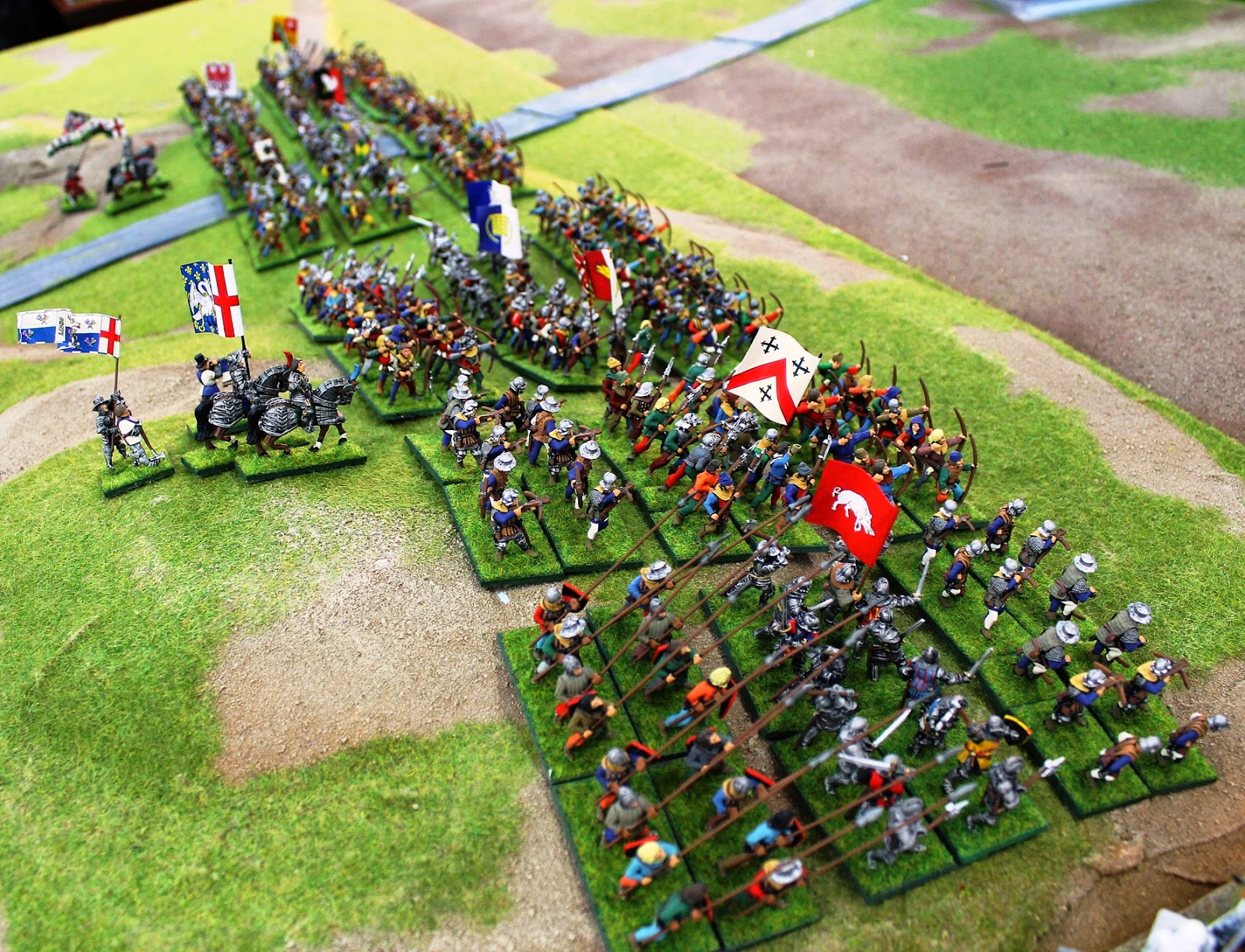 Scenario rules addressed the inclement weather; archery with the wind, that is to say that of the Yorkists led by Lord Fauconberg, had an increased range of 36 inches, whilst that going into the wind, ours, would only have a range of 12 inches. And all archery could only take place in the first 3 moves, after which archers could only fire at short range in support of close combat, having scrounged up a few more arrows from the ground. 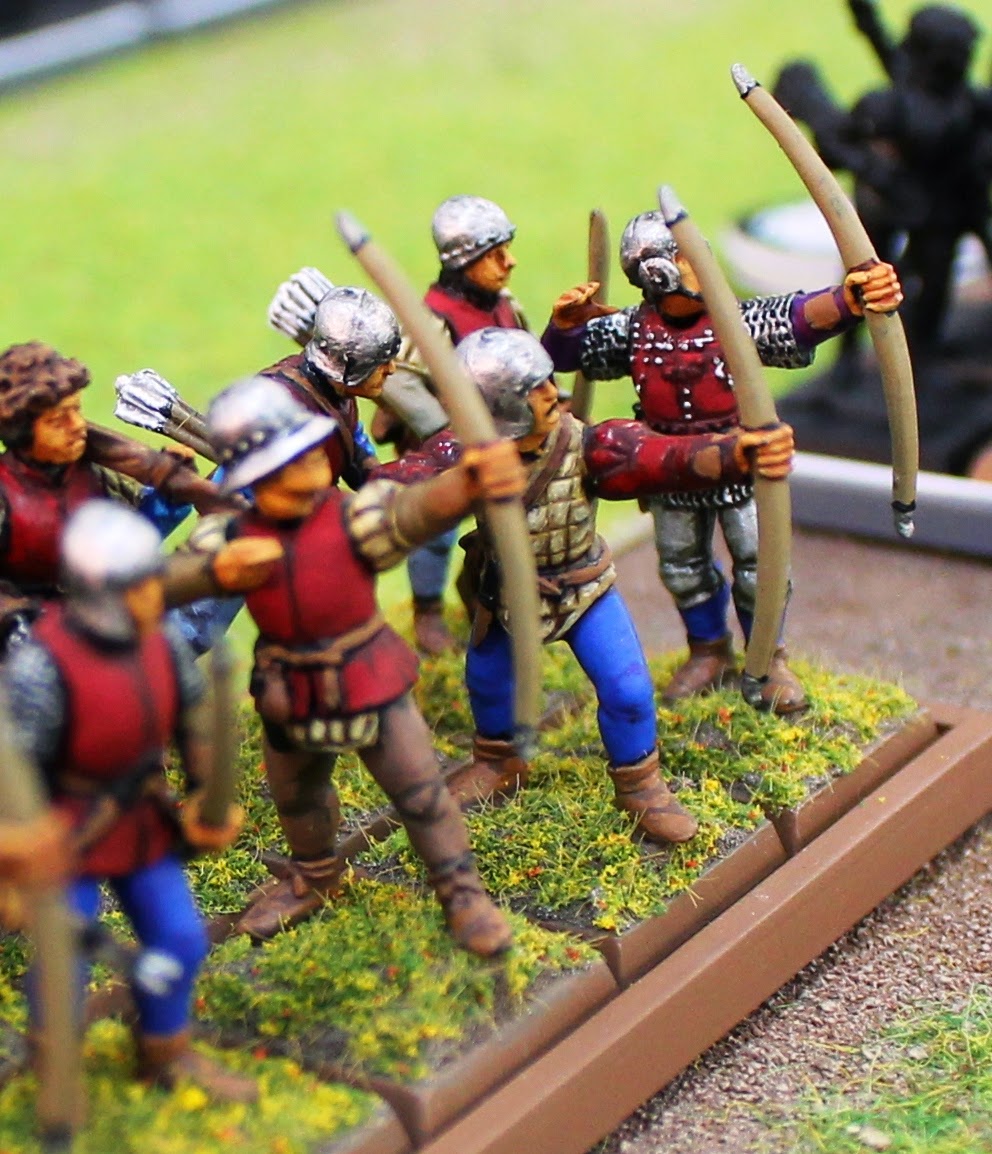 The Yorkists opened with a fairly effective volley of arrows. Then it was our turn. I, as the Earl of Northumberland, had the Lancastrian vanwards battle on the left flank,  commanded by Clifford (presumably, as he had fallen the previous day at Ferrybridge, his son!) and Exeter, and had been instructed to advance down into the valley along with the rest of they army. A dyed in the wool Napoleonics man who is happiest playing with a British army on a reverse slope, moving off our nice defensive ridge seemed like folly to me, but I did as I was told. Success rewarded my loyalty, giving my archers a full 3 moves with a lucky command throw, and I followed up, moving my men at arms and foot knights a much less impressive single move in an attempt to outflank my opponents from my left.


This was clearly a risky move, as we knew Norfolk would be coming this way, but I reasoned that with equal odds I should be able to close with and seriously dent my outnumbered opponents within the three moves I had in hand before they could appear...

However the command and control dice Gods were no longer on my side and 1 failed order and 2 successive single moves meant that I failed to get into position on the weak Yorkist right flank in time to grab all the glory myself... 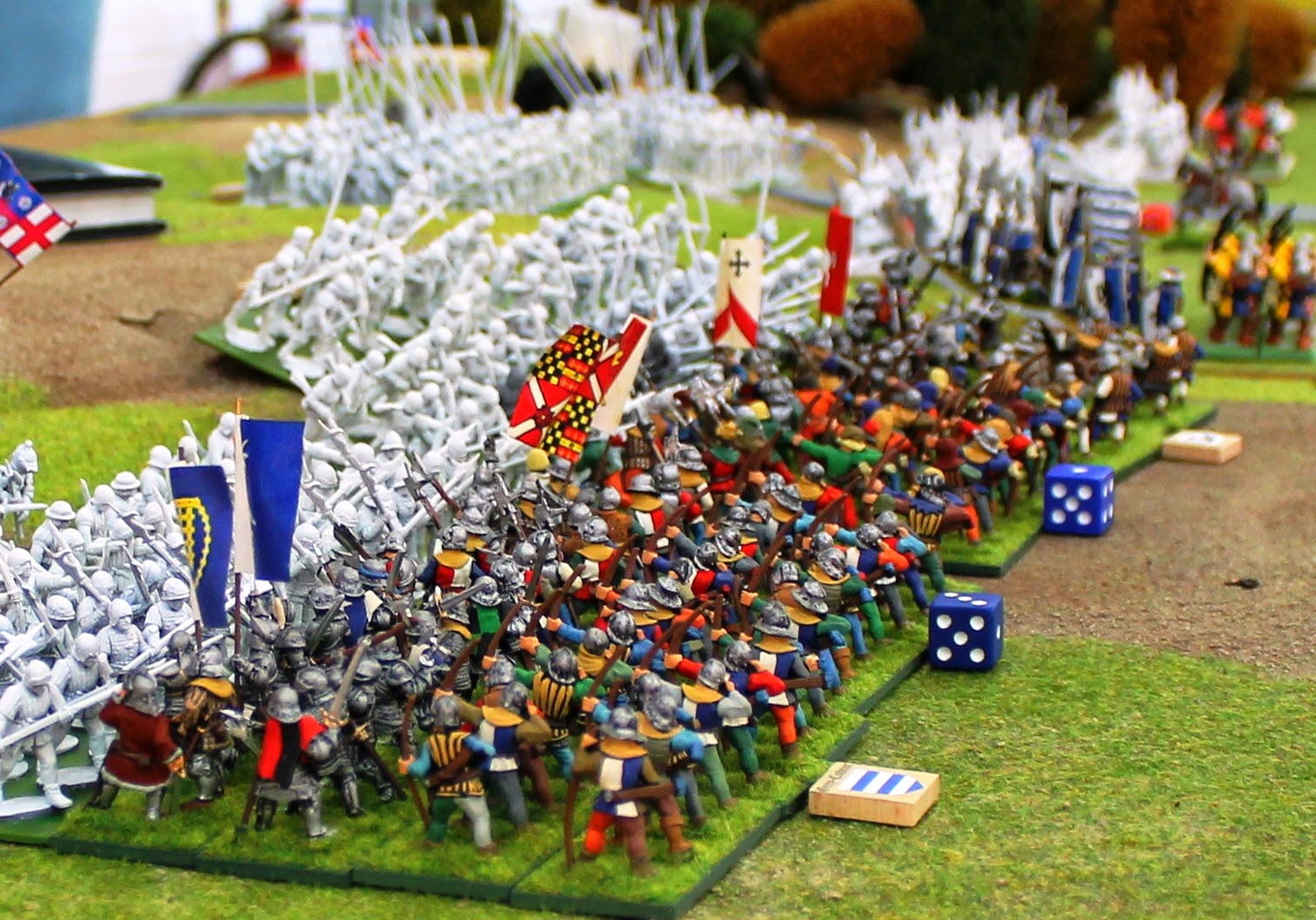 But that was ok as over in the centre, and right wing, Shannon and Terry were doing just fine by themselves! Terry had been throwing sixes like they were going out of fashion, but it was
Shannon's men who got stuck in first...

and were doing pretty well too! Do painted figures always beat unpainted?

But by this time I was occupied elsewhere as the Yorkist reinforcements under Norfolk appeared to my flank! Fortunately for the Lancastrians, it was now Philip's turn to earn the displeasure of the dice Gods, which meant that not only was he not able to take my forward division in the flank, but his supports blundered away to their rear! Advantage was duly taken: 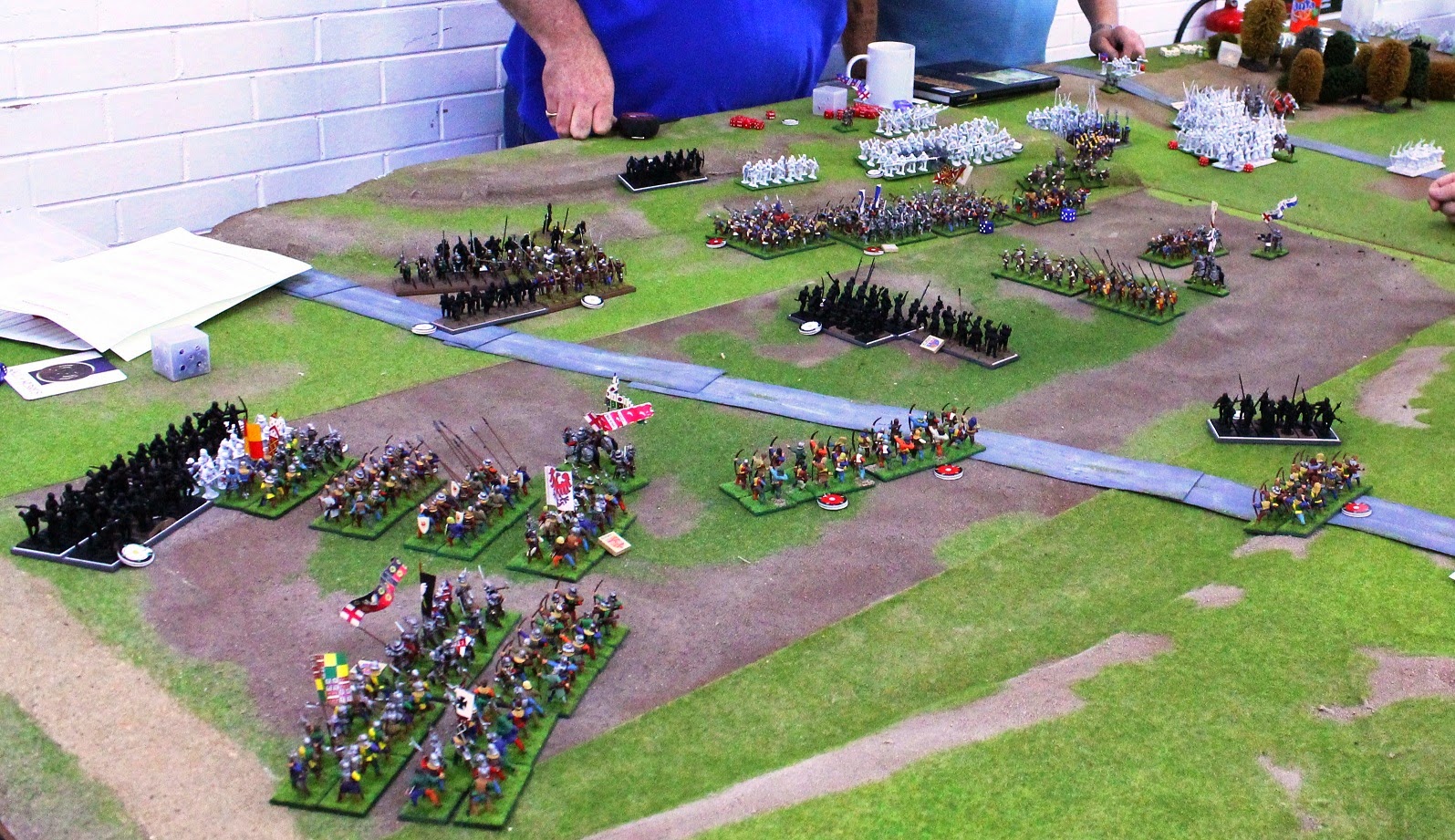 and my Retinue Men at Arms cleaved their way through the Yorkists... 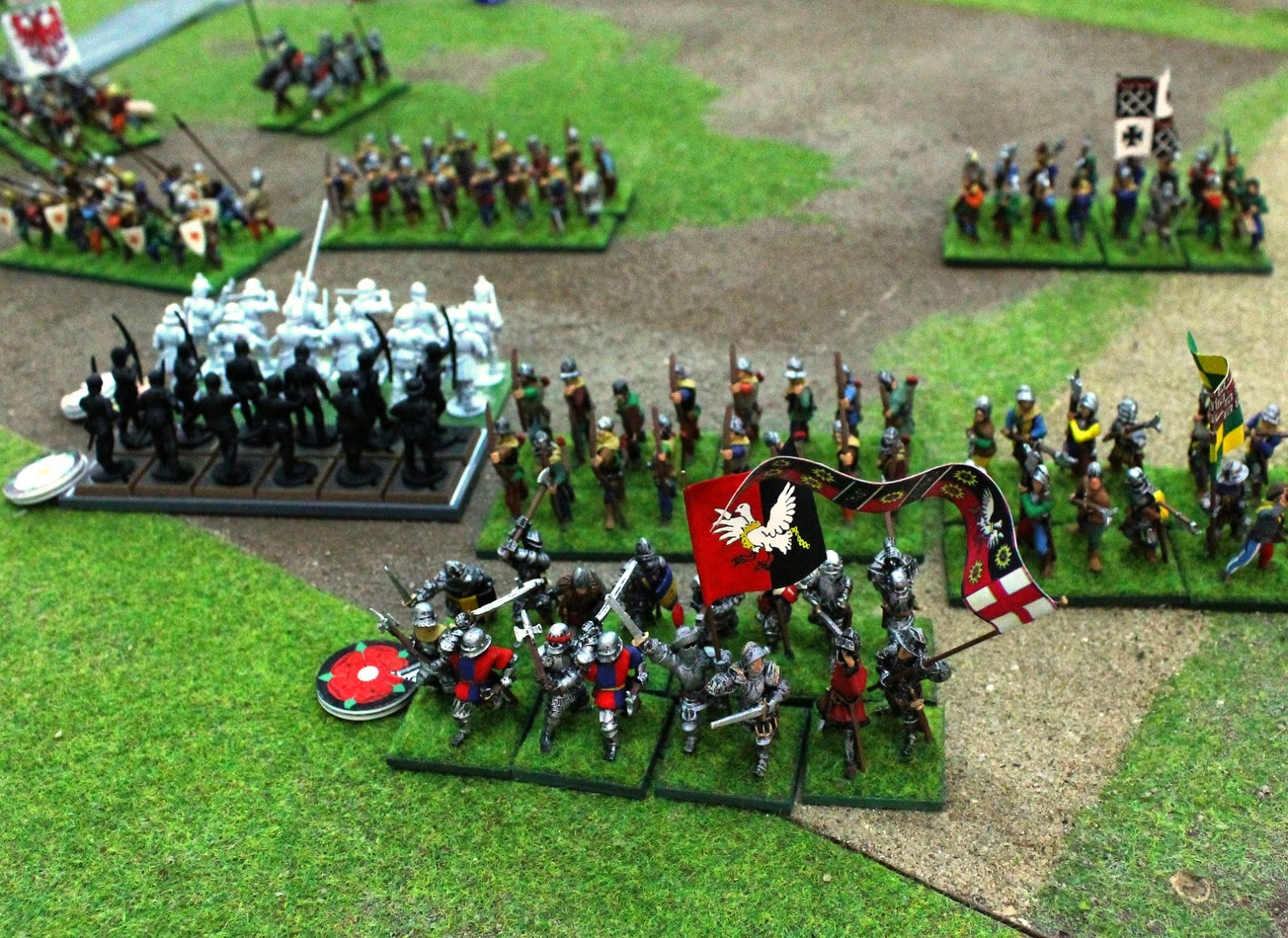 So that by now units from different wings of the Lancastrian army were meeting in the middle to sandwich remaining Yorkists. 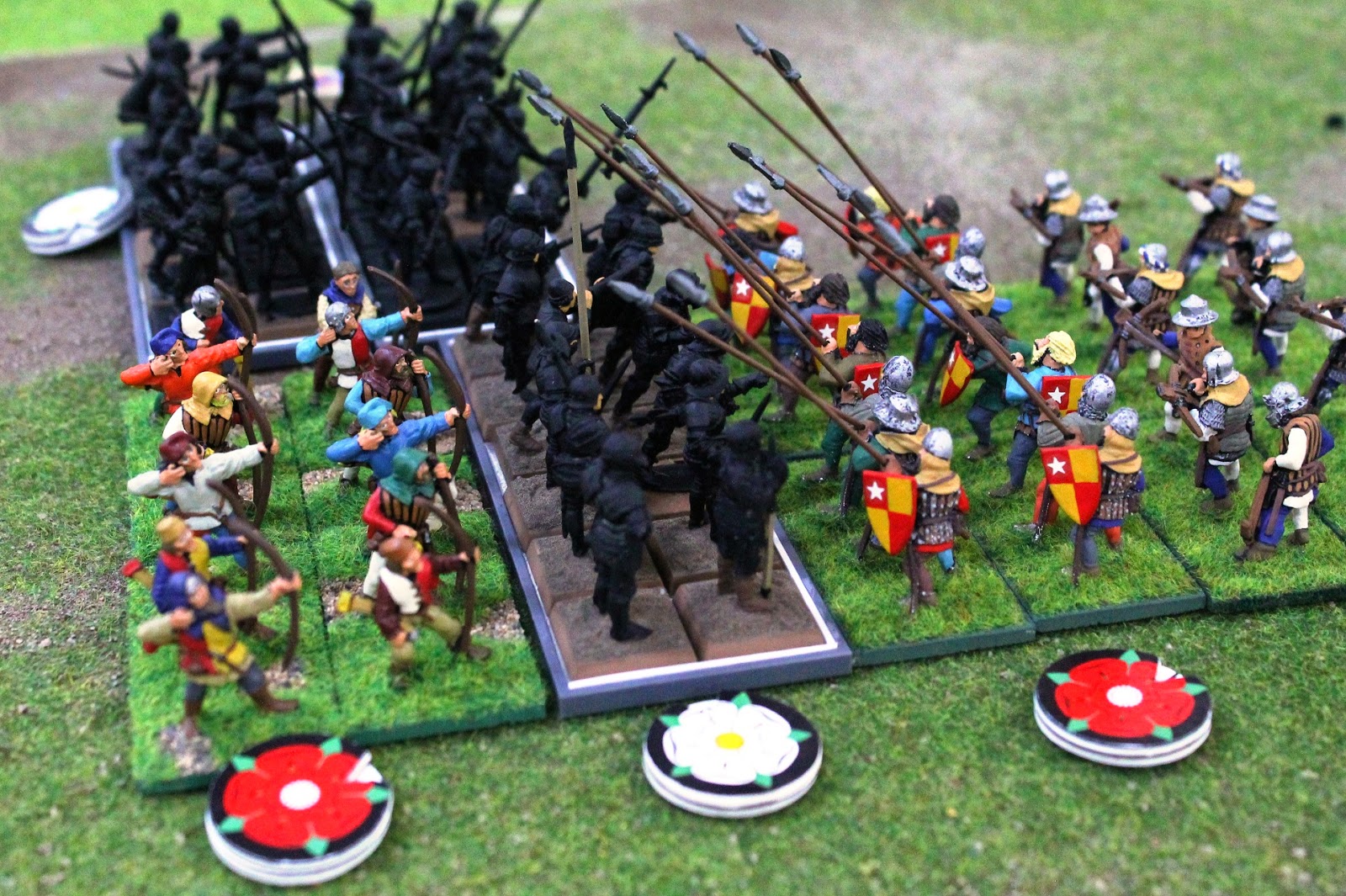 Whilst this unit survived, by dint of Philip's usually jammy dicethrowing...

It was not the same story elsewhere, as Terry's forces enveloped Vic's hard pressed Yorkists left, and then worked with Shannon to grind down Rob's Yorkist centre. With remarkably good grace, the hard pressed Yorkist team conceded that we had changed the course of history this day! This had been a close fought game, which would probably have ended in a historically long and bloody clash had Norfolk's reinforcements come in where they were supposed to. As it was, over half of the Yorkist units were broken off the table, with the Lancastrians losing about a quarter of their army. So still a bloody battle! But lead soldiers only have lead widows, so it was with glad hearts and smiling faces that we packed up, looking forward to our Bosworth game in a month or so!
Posted by Sparker at 18:06
Email ThisBlogThis!Share to TwitterShare to FacebookShare to Pinterest