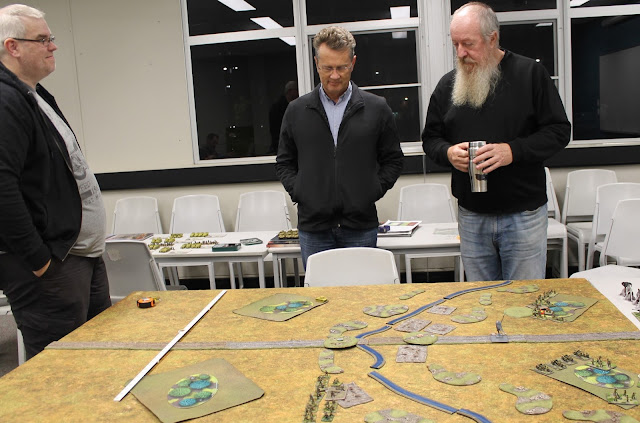 For our Firestorm Kursk Day 2 Game 4 I developed and briefed a scenario loosely based on the GrossDeutschland Panthers operating around the Pena River on the 7th July 1943:

Situation             Major Meinrad von Lauchert’s Panzer Regiment 39, consisting of 2 battalions of Panther tanks, famously had a poor introduction to the Battle of Kursk on 5th July, seemingly to gravitate time and again to quagmires or minefields. However after a few days, on drier more open ground, they began to justify the faith showed in them. Incredibly, however, on the 7th July they were then asked to move to another waterlogged bog replete with minefields, to spearhead the assault on the Pena river to firm up II SS Panzer Korp’s western flank …

They would form part of Oberst Strachwitz’s Kampfgruppe, consisting of 30 Pz IIIs and IVs, and the remaining 43 Panthers, as well as Panzer Grenadier support. They would be opposed by AT guns, mines and T-34s of General-major Andrei Getman’s 6th Tank Corps, part of Lt-Gen Mikhail Katukov’s 1st Tank Army. 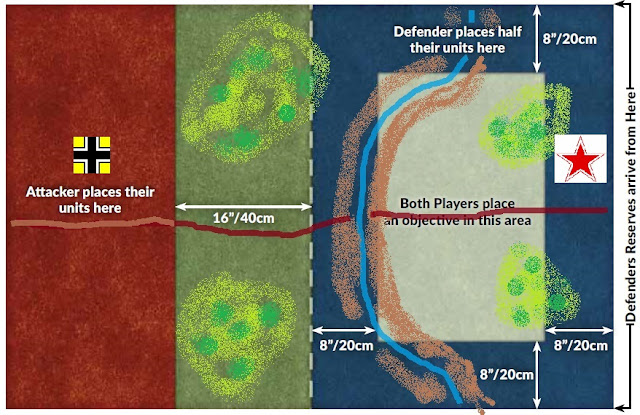 The Pena river was shallow and only 10 metres wide (Cross check), but its banks were lined with bogs and marshes… A 6” strip each side of the river constitutes terrain and also causes bog checks to all vehicles and guns.

Strachwitz, applying the lessons of the disastrous Panther debut, opted to lead the assault crossing with the Panzer Grenadiers, the long-armed Panther’s supporting with direct fire from the German side of the river. 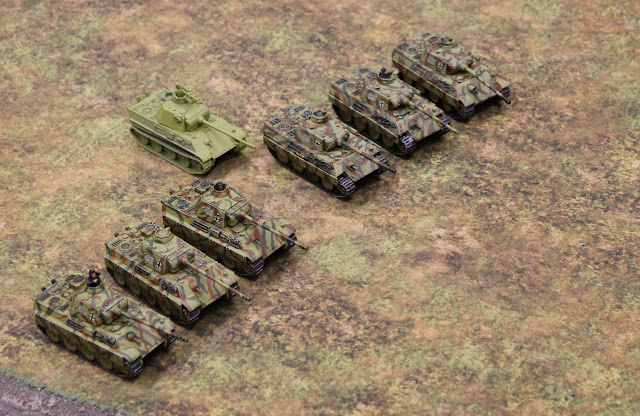 Mission – No Retreat (Except Soviets get 3 minefields)

Forces – 120* points each side, ideally 2 or more formations. Germans are encouraged to use some Panthers*, as well as Pz Grenadiers and other medium tanks. Soviets are encouraged to concentrate on AT guns and T-34s, with a minimum of infantry… No Air, No AA. (Actually on the day Colin and Peter deployed 178 points between them, Bryan and I had 120 + 3 minefields)

* If Germans field a Panther Tank Coy at least 2 Panther platoons of 3 Panthers each, they may spend an additional 60 points on that formation, so up to 180 in total. 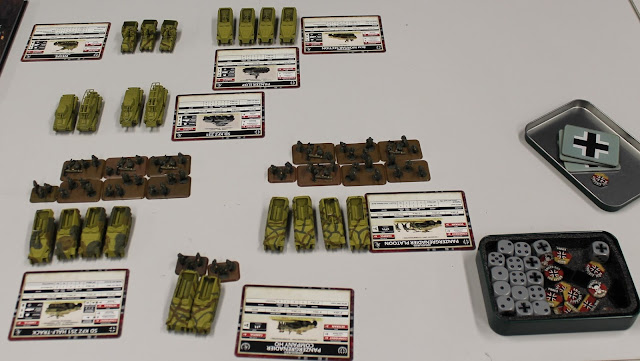 German objectives must be placed north of the Pena River. 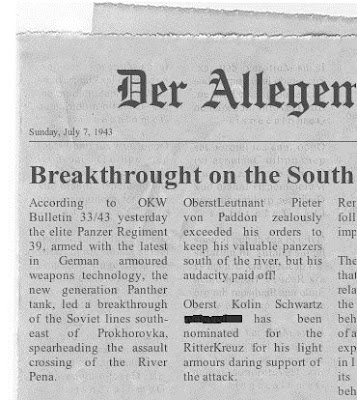 This was now the fourth game in our Firestorm Kursk campaign, and the Germans had yet to make a firm lodgement in the Russian lines, so I had skewed the points slightly to both nudge them towards a historical scenario, and boost their morale and interest. However I still wanted a challenging scenario, but, given the disparity in Soviet armour where Panthers are concerned, the terrain and minefields would have to do a lot of the heavy lifting!

With the Soviet having to put half their platoons into immediate deep reserves, Bryan wisely kept all his Red tanks off table, which meant I, as the Red infantry commander, was able to deploy all my platoons except for one Mortar battery.

With two Hero Rifle infantry platoons, my plan was to set one up around our objective, but to deploy the other well forward with the intention of rushing them forward into the German sector, using the cover of the large woods to harass the German light armour from the rear with their PTRDs. 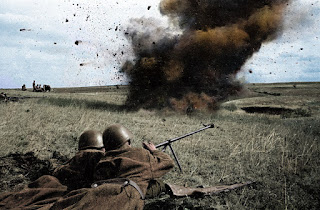 Perhaps a rash decision, as the German team had the first move, but all infantry start the No Retreat scenario dug in and gone to ground, so they should survive the limited German artillery which was bound to come their way? Viewed with some scepticism by some, at least at this stage of the war, I retain some affection for PTRDs, at least the way that FOW treats it as with a high rate of fire concentrated on a large base, and I hoped this aggressive forward deployment would distract at least some of the German light armour and infantry from the objectives deep in our end of the table. Our 76.2mm ZIS-3 AT battery was kept in ambush, and the 45mm AT battery deployed in woods to cover the German objective which was out in the open.

The Germans deployed with Peter’s Panthers on their left and centre, and Colin’s light armour and panzer grenadiers on the right, stretching across the table. Deliberately or not, given the ambush deployment rules with minimum 16” from enemy when in the open, this scotched our hopes of being able to spring a ZIS-3 ambush on the weaker Panther side armour – and front shots would simple bounce! As expected, a barrage fell on the forward rifle platoon but, dug in and gone to ground, all bar one team survived.

With our opening move my lead rifle platoon scurried forward into as much cover as they could manage, and my lovely 120mm mortars laid down smoke to increase their protection from the armoured cars that were hunting them. However they still suffered further light casualties. Bryan succeeded in bring some armour on; he opted to play safe and keep them concealed behind the woods.

Whilst the Panthers kept pushing straight on for the river bank, affording no opportunity for a flank ambush, the Panzergrenadiers had definitely taken the bait and were deploying serious firepower against my forward infantry platoon. Concluded their lifespan was going to be short anyway, and since they had served their function, I launched an assault on the flanks of the armoured cars – a forlorn hope which was duly cut down in a lethal spray of unsuppressed, multiple, 20mm automatic fire – it wasn’t pretty… 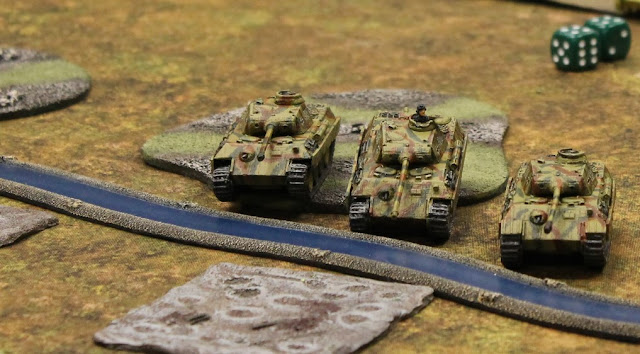 By this time the Panthers had been milling around their side of the river bank/swamp and Peter was getting bored them just with plinking at hidden and gone to ground AT guns, since Bryan was wisely refusing to present worthwhile armoured targets. Peter therefore took the plunge, and unfortunately for the cause of socialist fraternity and free beer for everyone, by dint of Cross Here movement orders the Panthers traversed the multiple hazards of both swampy river banks and the river crossings seemingly without pause! Not even a gearbox fire! Still no chance for a side shot ambush either, and space to deploy the AT guns was running out…

By this time the German light armour and pzgrenadiers were crossing the river, and it was very satisfying to whittle them down and pin them with the 120mm death dealing mortars! However as they recovered and started to close on the German objective, it was time to repurpose the ZIS-3s and 45s in the anti-personnel role - German smoke screens permitting! 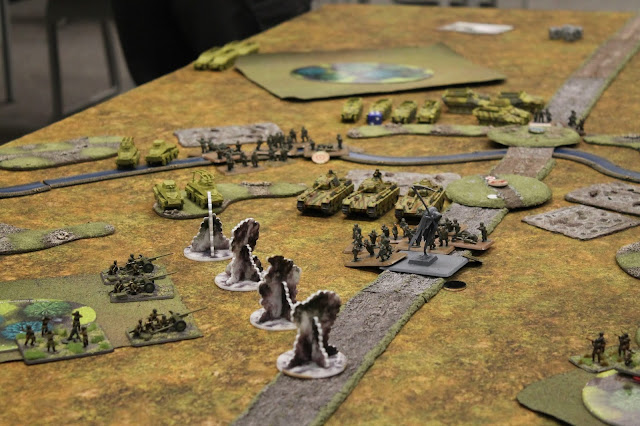 Meanwhile Bryan had continued moving his armour from reserve to the concealed forming up point and was ready to engage the Panthers... 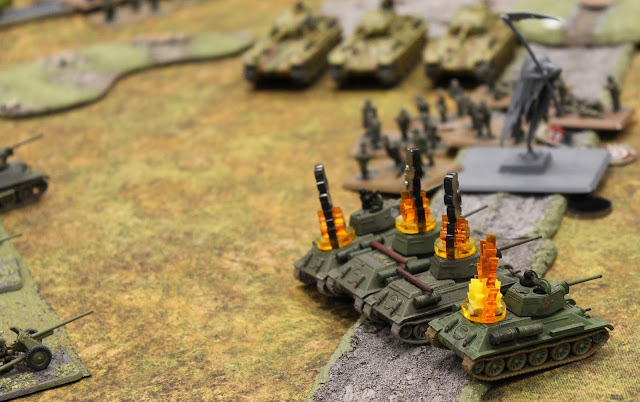 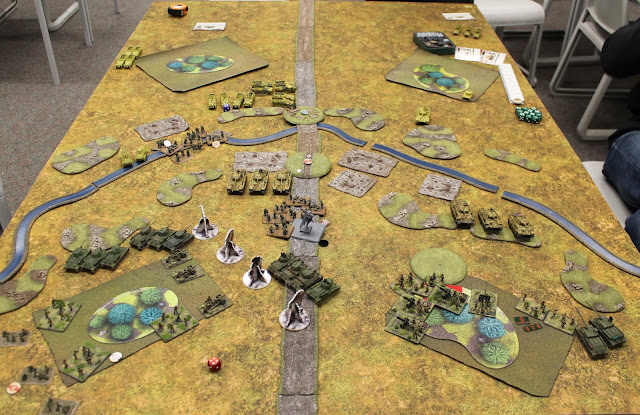 They succeeded in bailing one Panther – no mean feat for the Soviets in 1943! But retribution was not long in coming... 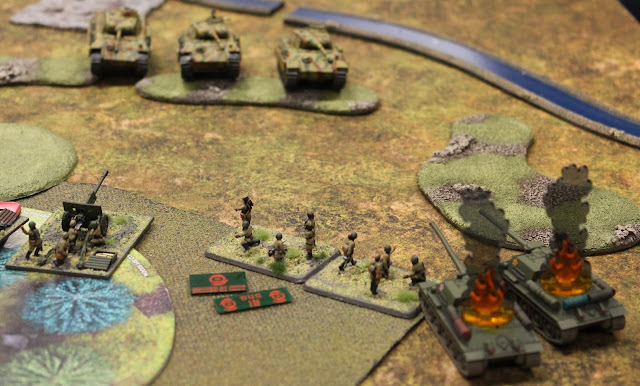 However, by move seven the Germans were in unopposed possession of their objective and it was game over – the Germans had finally broken through the first line of Soviet Defences! 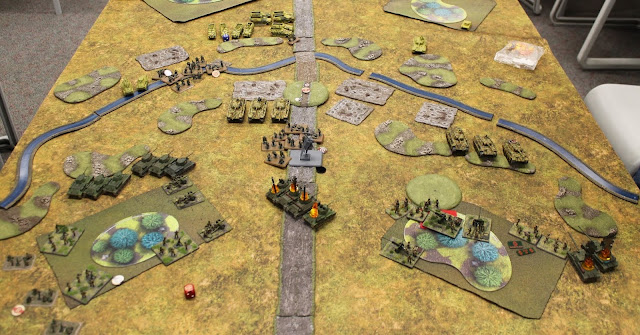 So the campaign remains uncannily historical in its pattern. Our next game returns to the Northern Front, and Peter is working up a scenario based on the 11th Pz Div on the Belgorod- Kursk road:

"Having successfully broken through the second line of Soviet defences to the west of Syrtsevo the 11. Panzerdivision advanced up the Belgorad-Kursk road towards Oboyan."

Suggested Terrain: Rolling hills with the road winding through a valley, perhaps a few farms and fields.