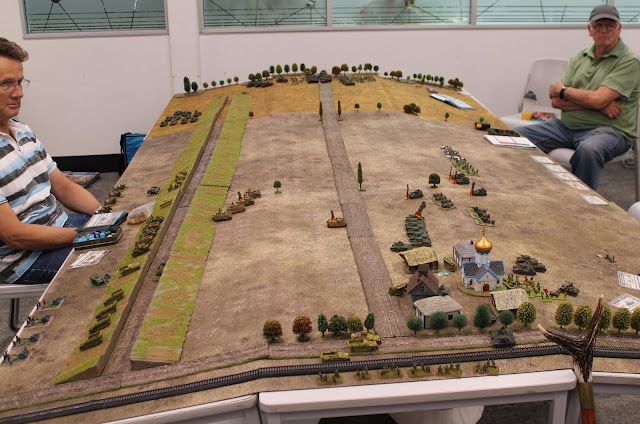 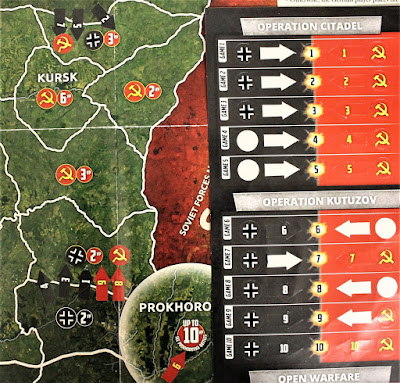 The culmination of our 6 month long Firestorm Kursk campaign, Sunday’s game by the Wollongong Wargamers was a fitting finale – it could have gone either way, and was characterised by daring manoeuver and devastating firepower, all on an epic scale! In campaign terms, the German team would have to capture all 3 of the objectives to win the overall campaign, as they start the final game 2 victory points behind the Russians.

The premise of our game was to focus on one aspect of the Rotmistrov’s 5th Guards Tank Army’s attack on the II SS Panzer Korps, who were themselves readying to attack and seize Prokhorovka, the action around Hill 252, where elements of the LAH Panzer Division were preparing to move forward.

Owing to the curved topography of the hill, they were surprised by the Soviet assault, and so the action was something of a meeting engagement and an epic engagement which continues to fascinate!

The Soviet 170th, 181st and 31st Tank Brigades are spearheading the counter attack of the 18th Tank Corps, supported by infantry from the 9th Guards Airborne. Despite an uncoordinated approach in both time and space, they surprise the German defences at Hill 252, which is only lightly held by 7 x Panzer IVs of the 1 SS Panzer Regt, 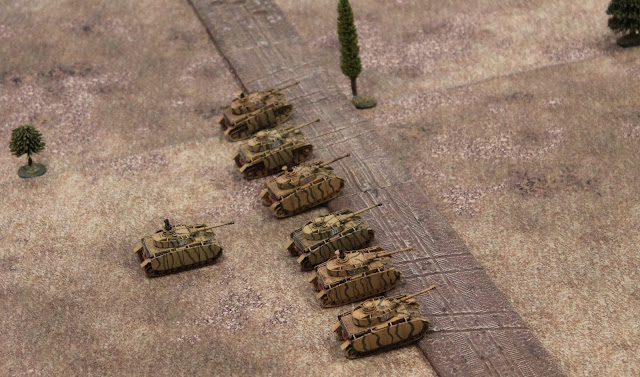 and an understrength Pz Grenadier infantry company of the 2 SS Panzer Grenadier Regt, supported by a handful of AT guns and assault guns.

However the defensive position of this handful of LAH tankers and infantry is ideal, atop a large slope leading to Height 252, and defended by the remains of a large anti-tank ditch.

Their desperate defence lasts long enough for the intervention of 4 x Tiger 1s, led by one Michael Wittman…

The 3 Soviet Tank Brigades each had infantry attachments from the 9th Guards Airborne desantniki, and collectively pooled supporting artillery, SP guns, AT guns, and a variety of mortars, for a total of 500 points, arriving in 3 successive waves, depending on reinforcement rolls. The LAH were defending their 3 objectives with 380 points, with the Tigers being rolled for from move 4.

On the eastern flank the Soviet 31st Tank Brigade opened by attacking Oktjasriskij from the outset, tenaciously defended by a platoon of 2 SS Regt Panzer Grenadiers supported by an assortment of half-track mounted guns and mortars. 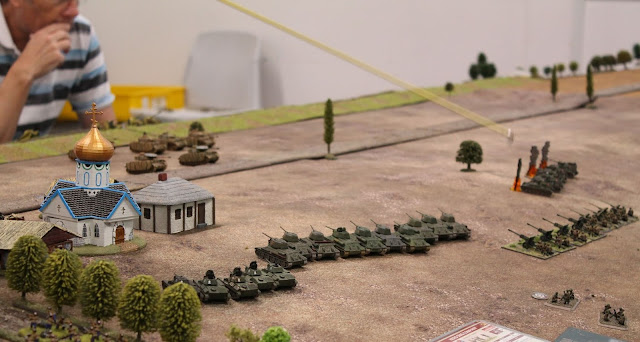 However the Soviet storm of steel unleashed by the supporting battery of 8 x 120mm mortars, catching the landsers before they had a chance to dive into their buildings and foxholes, set their defence back right from the start. However it was not until Soviet reinforcements in the form of a second Tank Brigade of Churchill tanks arrived with tank riders that the village, and its objective, eventually fell.

This attack had been supported by the majority of Russian support units, who had advanced their towed artillery and AT guns steadily towards the crest to take the 7 Panzer IVs under fire – with mixed results…after taking heavy casualties from the Panzers and from Panzer Grenadier SFMGs in the anti-tank ditch, they managed to discomfort the Panzer IV’s sufficiently to make them retreat back over the ditch.

The platoon of SU-85s had remained aloof from this scrap, however, moving to the western flank to secure that flank against any heavy armour that might appear… 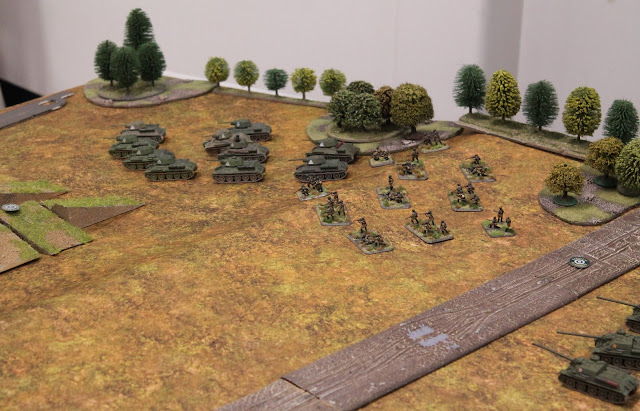 This western flank saw the successive arrival of 2 more Soviet tank brigades in moves 2 and 3. The first brigade, of T-34s, moved rapidly around the flank of the anti tank ditch to menace the western most German objective in they had placed near the middle of their table edge.

The third Soviet Tank Brigade, aware that Wittman’s Tigers were soon due in the vicinity, sent only their faster KV-1S’s across in support of the lead T-34s, leaving the heavier armoured KV-1s on the flank to counter the Tigers when they appeared… 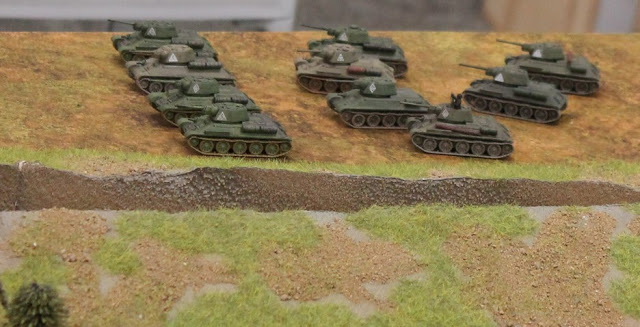 The soviet attack from the western flank against the middle objective…

was soon met with heavy fire from Marder AT guns and 105 howitzers in direct fire mode, who extracted a heavy toll of T-34s from the lead Soviet Brigade.

At this stage, the LAH were facing unrelenting pressure on both flanks; down the railway line from T-70s and submachine gunners to the East... 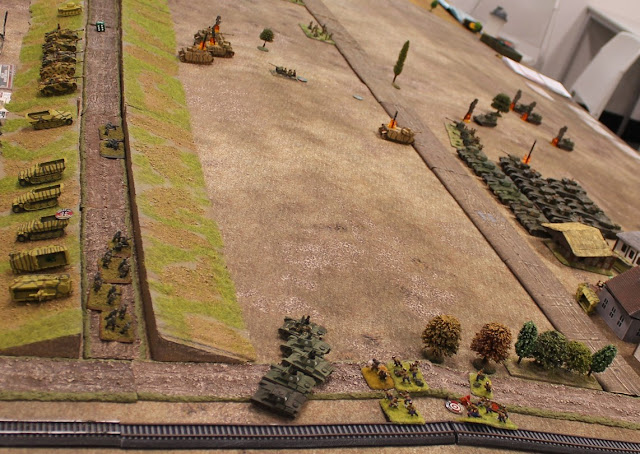 and along by the AT ditch to the West from T34’s and KVs, and massed T-34s and Churchill’s to the front! And no sign of Wittmann! 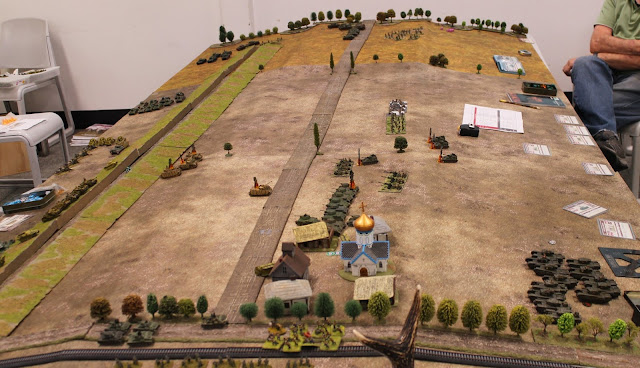 With the first Soviet Tank brigade attacking from the West all used up, the KV1S’s had their chance and with their heavier armour began to take its toll of the Marders and 105s, 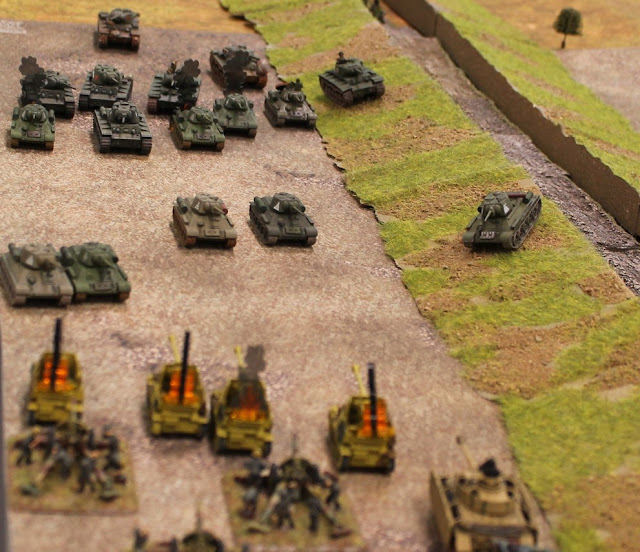 so that the surviving Panzer IVs and some of the StuGs desperately defending the middle approach had to be redeployed. 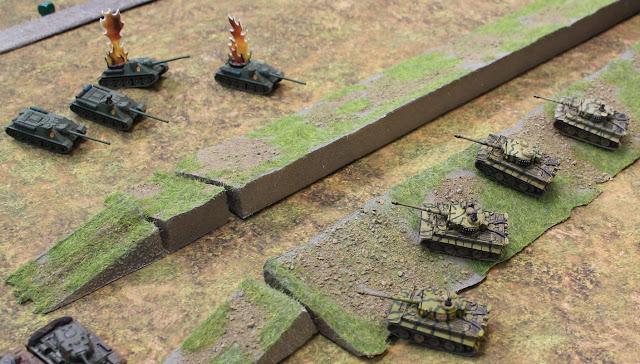 But Wittman’s arrival in move 5 put heart into the German team, as he set about methodically destroying the SU-85 platoon and KV-1s meant to contain him!

They took cheer too from the merciless shelling and werfering of two Russian infantry platoons foolishly moving, and then pinned, in the open. 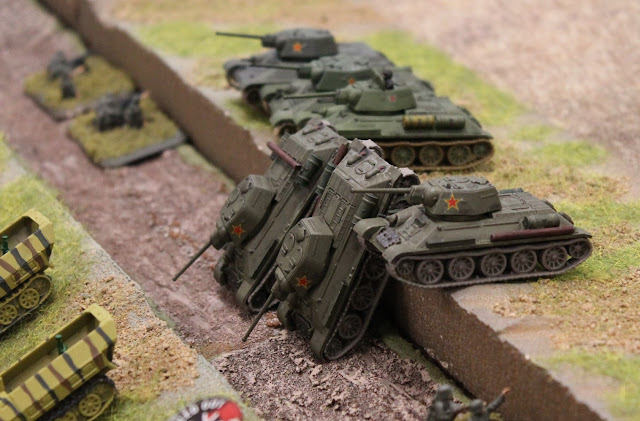 However, back on the Eastern Flank, the first wave of T-34s from the 31st Tank Brigade had rushed the anti-tank ditch. Whilst a couple failed a skill check and got caught out and written off, the remainder were finding a way across. 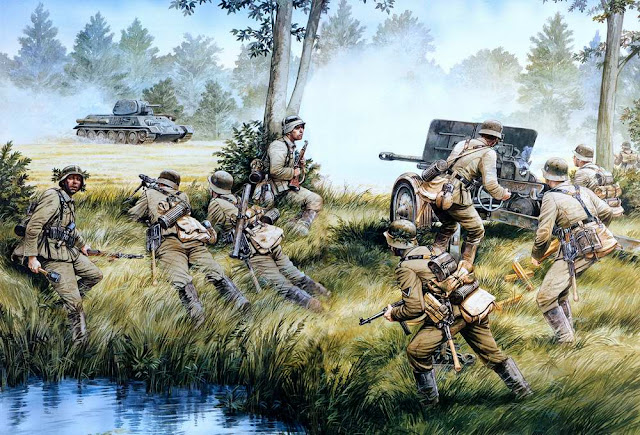 The Panzergrenadiers sprung their ambush of 5cm AT guns but the Eastern objective, also threatened by the Churchill brigade, was now in jeopardy.

With the Western objective being assaulted by the KV-1s, the Germans decided to call Wittman’s Tigers back across to the centre, but before he was even halfway across the ridge a second KV-1 assault took that objective, littered with Russian tank wrecks. His platoon was sandwiched between two Soviet tank forces, so his Tigers would be taking rear shots come what may – not that any of them had been more than bailed so far despite unrelenting hits from SU-85s, KVs and a couple of Shturmovik air raids! 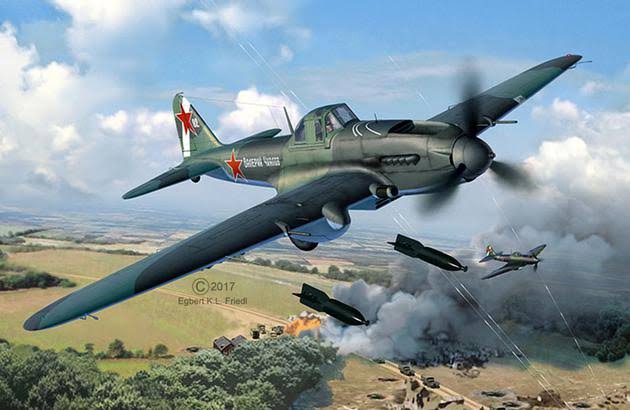 With 2 of 3 objectives lost, and with no prospect of gaining enough VPs to win the campaign, despite having inflicted staggering losses on the Russians, the German team finally conceded the hard fought game. 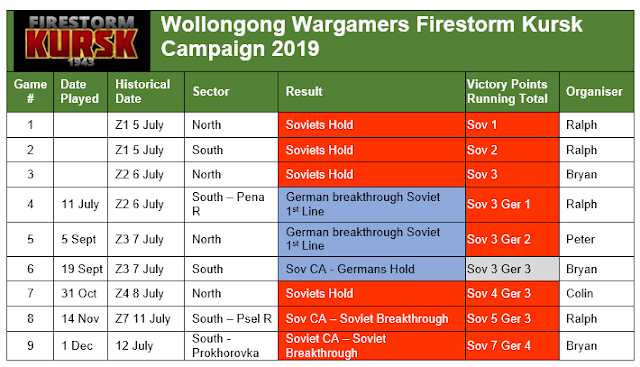 An epic end to a great campaign – a firestorm indeed!