I have long been aware of the wargaming terms, in the Ancients genre, of terms such as DBA, DBM, DBX, (and for all I know, DBC thru Z.) They all seemed to me to be characterised by internicine warfare between their authors and proponents, quite beyond the usual rivalry between WW2 and Napoleonics digs at other rulesets. I myself am rarely restrained in expressing my distaste for 'Vapid Fire', but I have never openly expressed a desire to wreak fire and storm upon the homes of those who like that ruleset, nor bring them before a court, and selling them and their families and descendents, down yea unto the seventh generation, into bondage, all of which, I vaguely discerned, was part and parcel of Ancients gaming. I just knew it was not for me!

However, persuaded by my HOTT mates at the Uni Club, I gave that a go, and found it Good. And a better, bigger, WOTR game was promised. Which, again by some arcane process of alphabetisation, apparently the most suitable set of HOTT for WOTR is DBA Big Battles. I suspected my leg was being pulled, but, Hey - it had 'Big'in the title, and I'm nothing if not a sucker for Big Battles! So below I bring you a report on this battle by its designer and umpire, Peter:

(And a damned fine pair of games they were too, by universal acclaim - which is rare at any wargaming club!)
﻿﻿
Battle of Barnet (using Big Battle DBA 3)

This week we refought the Battle of Barnet using Big Battle DBA3.0 plus a few house rules to get the offset deployment and to allow for the effects of the mist.


In both games the armies were deployed offset and fairly close to each other to simulate the committed deployments and confusion that occurred due to the fog.
Game 1 – A decisive Lancastrian Victory.


The first game had the Yorkist advancing down the road in a column, which looked spectacular.  But it delayed the deployment of the longbow and blades of the Yorkist centre.  The Lancastrian’s deployed in a rough line across the table.


Both armies marched in to visibility and Long bow range.  The mist was slowly lifting 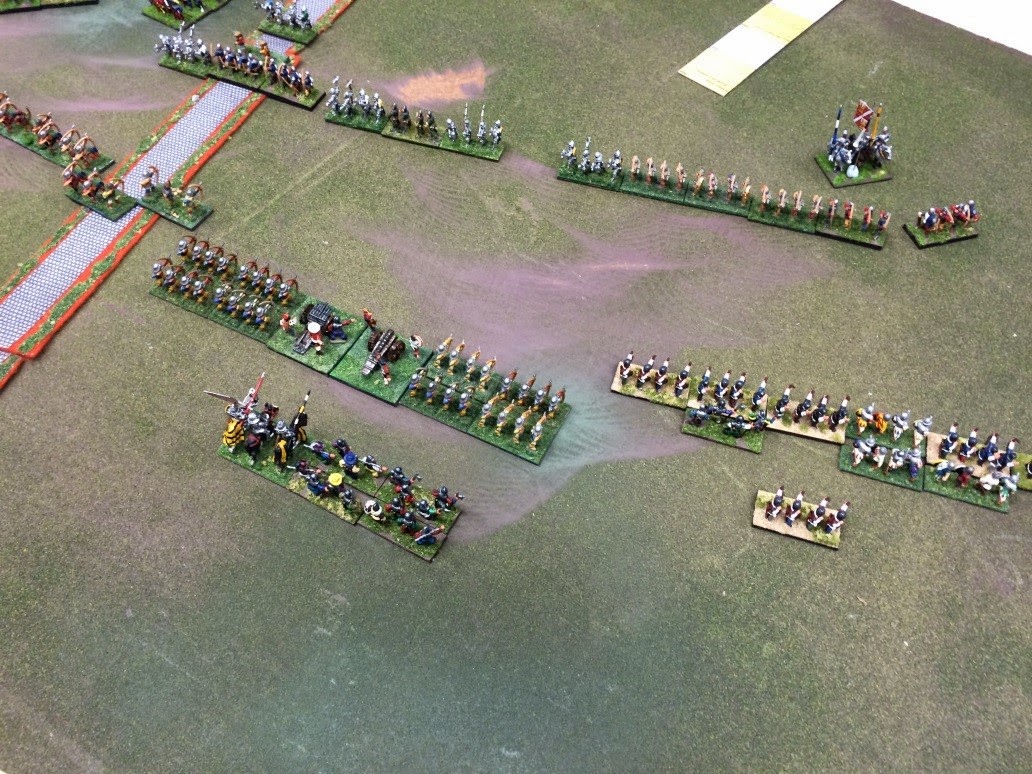 This photo shows the Lancastrian right flank and centre in the fore ground before they shot up Lord Hastings. 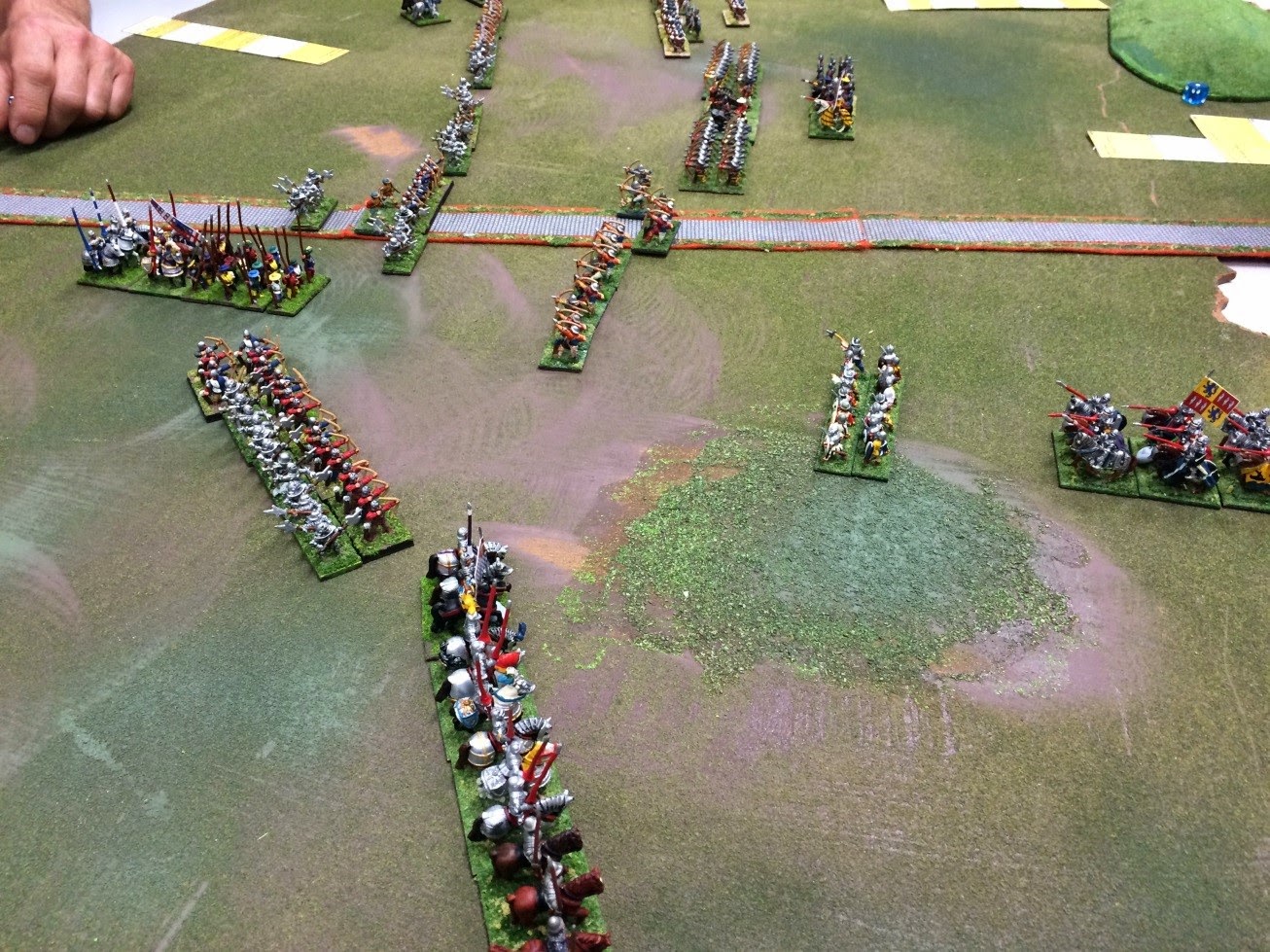 This photo shows the Yorkist right flank and centre advancing on the Duke of Exeter’s skilled longbow men, the men would do a lot of damage to Edwards command.


A summary of the battle


The Earl of Oxford’s (aka David) men shot down Lord Hastings men with massed long bow fire plus some Artillery fire from Warwick and soon Hasting’s (aka John) men were in retreat.


At the same time the Duke of Exeter’s (aka Ralph) archers aided by Warwick’s archers (aka Alan) started punching holes in Edwards (aka Caesar) central command.


The Duke of Gloucester (aka Geoff) advanced on Exeter’s exposed flank.  But before Gloucester could do much damage Edwards command was broken and in retreat.  This broke the Yorkist army, game over.


For most players this was their 1st games of DBA 3.0 so they did not realise how deadly bow on bow plus some long range artillery battles can be in DBA3.0 as compared to HoTT or DBA 2. Plus Edward’s column on the road could not deploy fast enough to get its deadly Pike and blade into combat.  The Yorkist soon learnt they would need a new approach if they were to win.   It was a very quick defeat so we started another game, same sides and generals.
Game 2 – A more historical result.


The Yorkist’s learnt from the 1st game, they even had most Knights dismount and deployed as blade. With only Richard of Gloucester’s men staying mounted, some men love a good horse.


This photo shows Richard (one day he will be King Richard III) of Gloucester (Yorkist) ready to advance on Exeter.


The battle lines are drawn this time the Yorkist deploy blade and pike to the front.


The battle develops along historical lines as before with Oxford advancing on Hastings and Gloucester advancing on Exeter.


This time Edward leads his Dismounted Knights, Billmen and Pike on Foot towards Warick and Exeter.


Exeter’s longbowmen fight valiantly but this time they are over whelmed by Edward’s and Gloucester’s heavy foot, whilst Gloucester applies pressure with his Knights.


Meanwhile Hasting’s leads his Dismounted Knights and Billmen in a stubborn defensive action slowing down Oxford.


The battle rages and Warwick slowly advanced (maybe too slowly) plus we found out that artillery is very fragile in DBA3 and they are quickly destroyed. 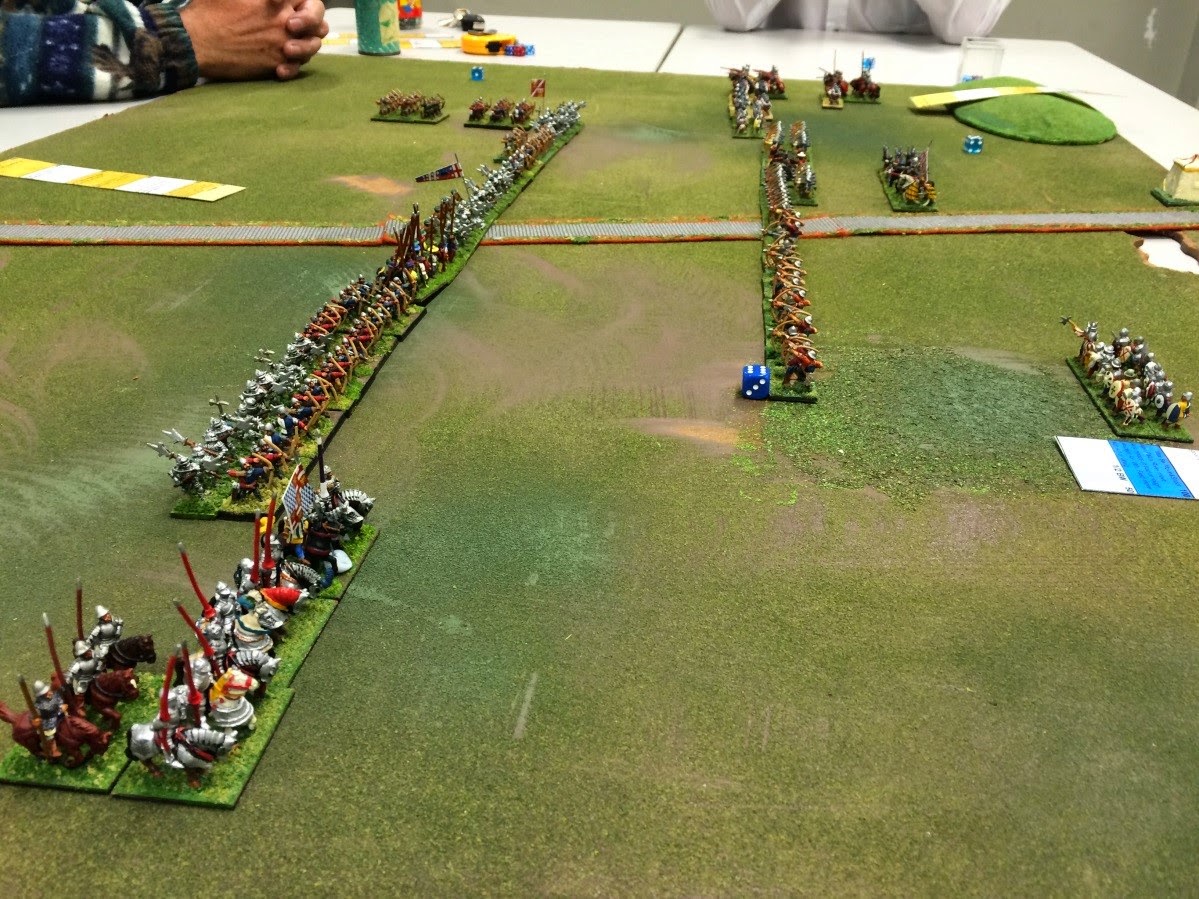 This photo shows Exeter and Hastings both under pressure, and with Edward advancing in the centre.


Then under pressure from Gloucester and Edward triggers Exeter’s command in make one last grand charge before it breaks, Exeter’s men have fought well but they were overwhelmed.


Meanwhile Hastings is still holding on bravely and Edward is advancing towards Warwick who is still mounted.


Warwick’s command is taking a lot of loses so Warwick decides to bravely charge Edward.


Warwick get surrounded by Edwards’s men and killed.  Then Lancastrian break and rout.
Post-game Analysis


This time the Yorkist’s dismounted most of their knight and deployed ready to fight massed longbow.  They were a lot tougher.


For most players these were their 1st games of Big Battle DBA 3.0 so we all learnt a lot and we played 2 games in less than 3 hours.


It was great to see how both games played out and how the players quickly adapted to DBA3.0. 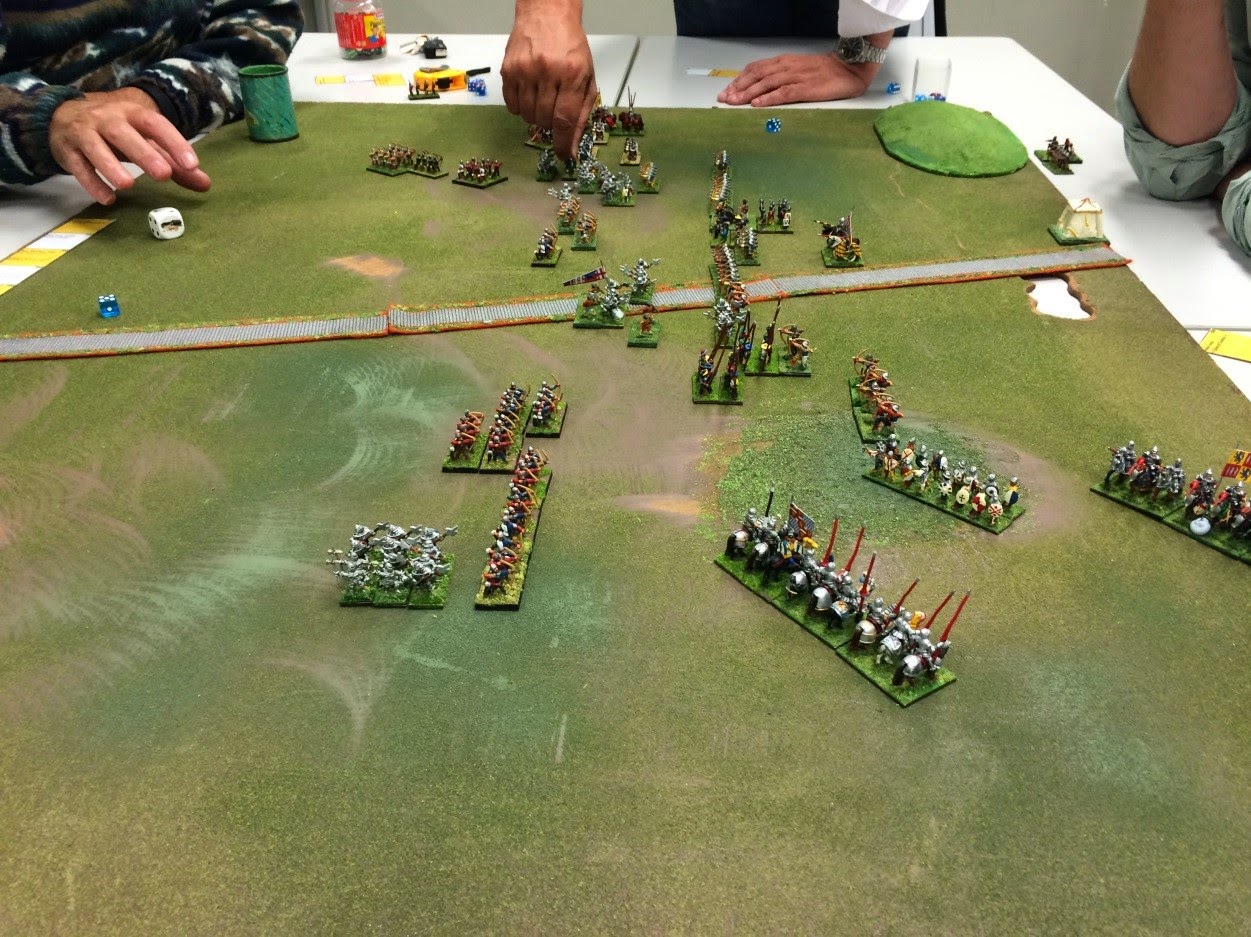 We plan to play more Big Battle DBA refights and more War of the Roses.
Posted by Sparker at 20:52
Email ThisBlogThis!Share to TwitterShare to FacebookShare to Pinterest