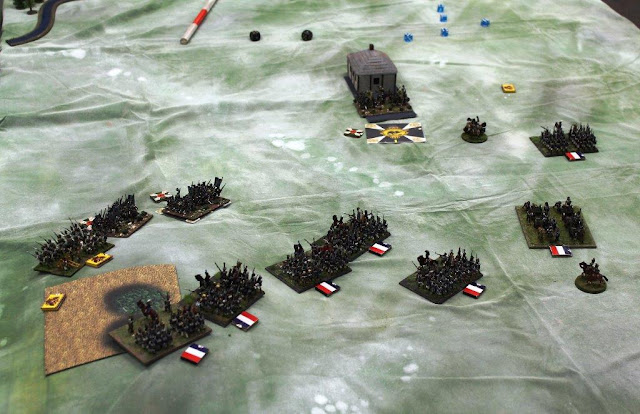 Yesterday the Wollongong Wargamers played a key aspect of the Battle of Austerlitz - Soult's IV Corps storming of the Pratzen Heights. 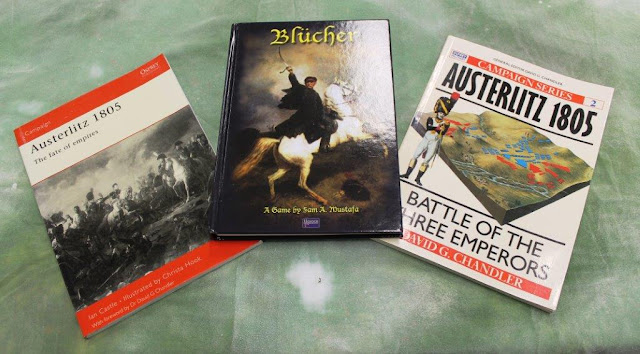 In Blucher terms, it was a pretty small game, but that was just as well, since, exhausted by the extensive play testing process... 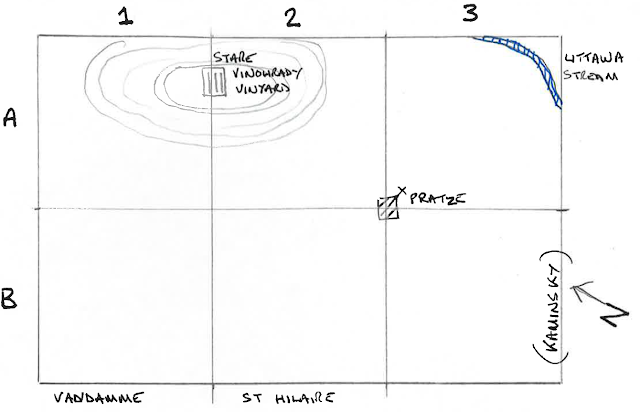 we had not played for a while after the initial blush of enthusiasm and so needed to refresh ourselves with the rules, straightforward and elegant though they are... 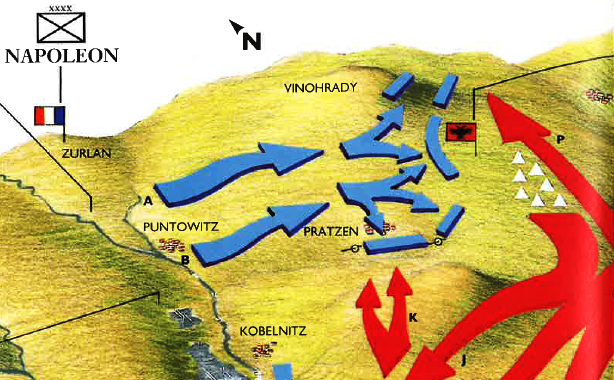 The idea of the game was simply to recreate the fight between the Vandamme's and St-Hilaire's divisions (Blue arrows A and B respectively in this diagram from the Osprey Campaign book) and the Coalition's Fourth Column led by Kollowrath and Miladorovitch (Red arrow P) and elements of Kamensky's brigades (K). 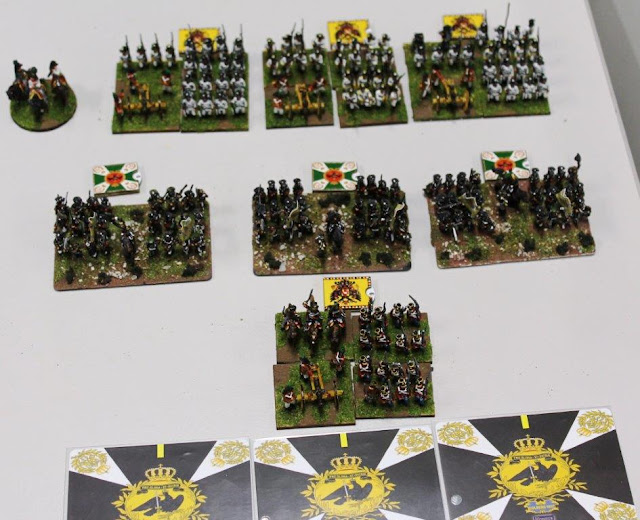 Three brigades of Caesar's Russians and a similar amount of Peter's Austrians, complete with attached artillery. There's also an Avant Garde Brigade in front. All Elan 6, and the Russians have the Steady attribute in defence. A further 2 Russian brigades of Kamensky's column may return to the action later in the game as reinforcements from move 6... 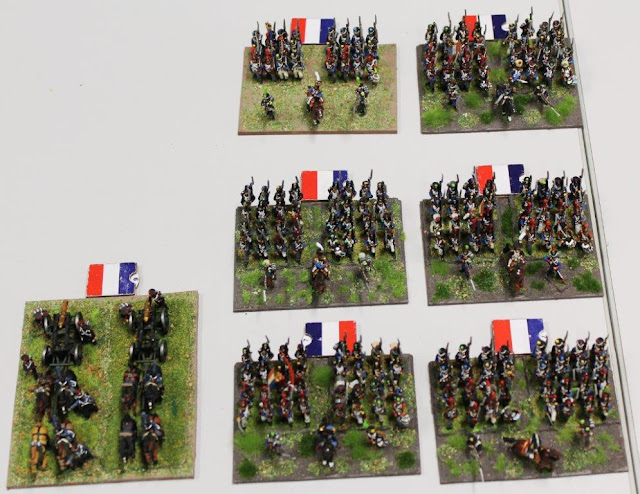 The French - 6 brigades of the Grande Armee's finest dogfaces at the peak of their Glory! And attached Corps artillery brigade. 7 Elan points, and both Shock and Steady attributes. A bit excessive perhaps, but this is 1805 - the start of the Glory Years! 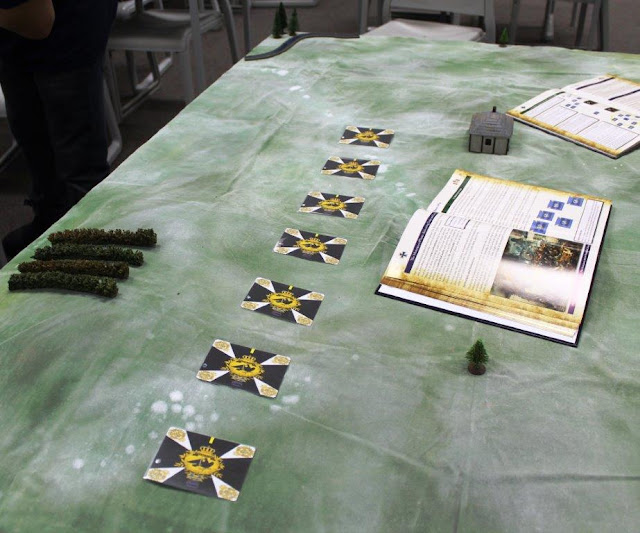 Caesar and I deploy Column Four historically, ignoring the 'weakly held' French centre and marching happily off to the South to crush the French flank...what could possibly go wrong...The vineyards of Staro Vinoradhy on the left, and Pratze village ahead, the Littawa stream in the far corner.

Although the whole table represented the heights of the Pratzen plateau, Vinoradhy was an area of particularly higher ground. 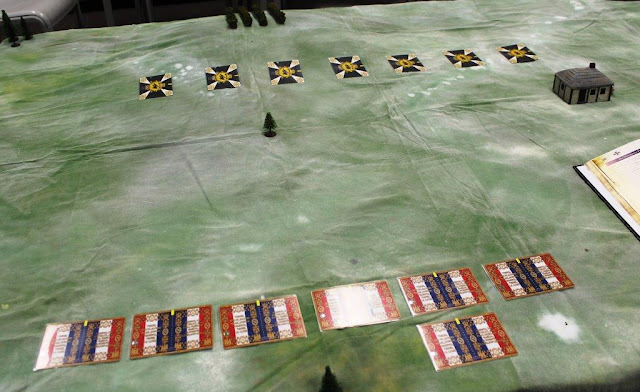 The French deployment - hidden at first - all set to take the Coalition in the flank. 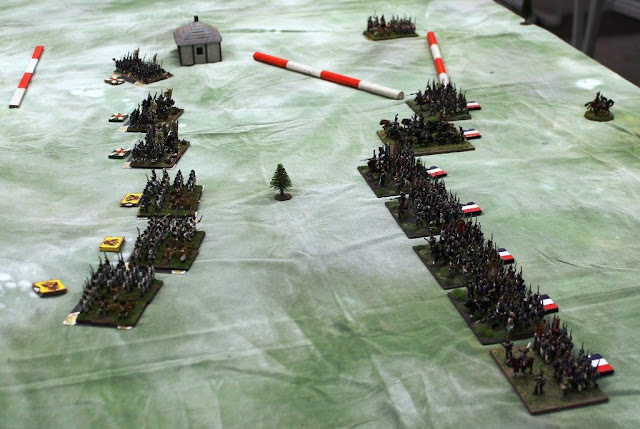 Given the fast movement available to hidden troops, it wasn't long before the French were upon the Coalition, who had time to turn and face and present a hasty and incomplete defence.

But it wasn't long before Bryan and Peter spotted that our right flank was resting on thin air.. 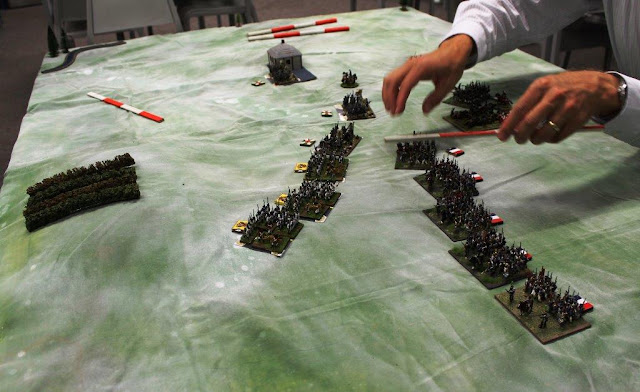 And they duly extended their line to take advantage...

On our left the match up wasn't too bad, despite the quality of the French troops, and we had ourselves force marched the Avant Garde brigade around to do some outflanking on our own account... 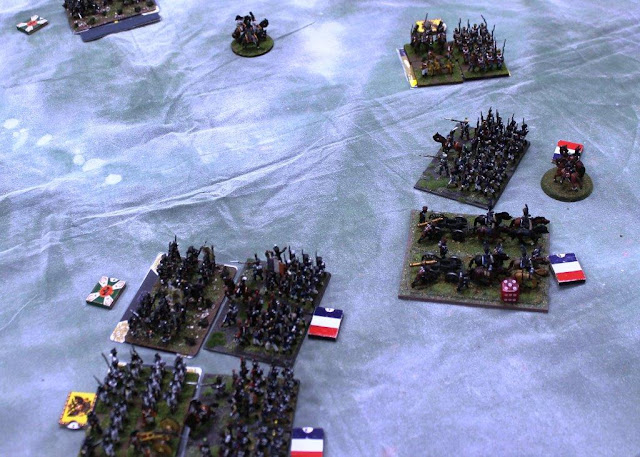 But on the key right flank, near the Vinoradhy objective, we were left hanging... 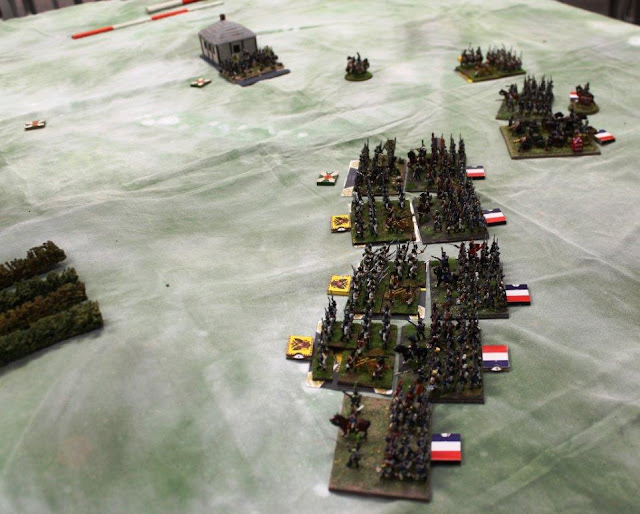 With the French taking advantage of our disjoined line to gang up on our gallant brigades...typical Corsican ruthlessness! 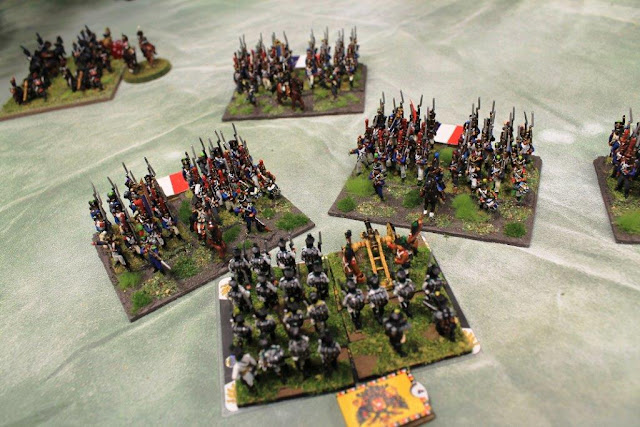 And soon our formation was disrupted and brigades weakened and forced back... 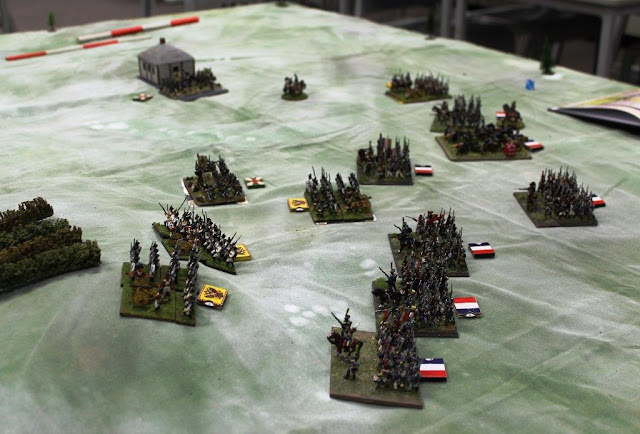 But the Ivans are made of stern stuff, particularly when defending, reflected in their 'Steady' attribute.﻿ 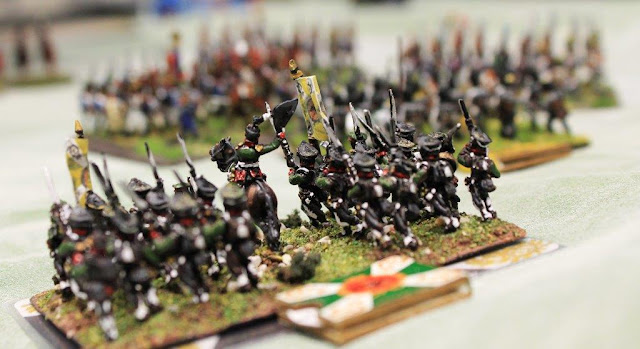 And the Kaiserliks can be pretty dogged too - we had survived the initial French onslaught. 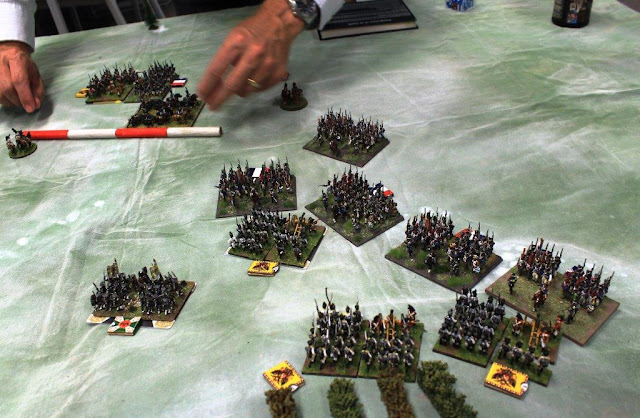 And help was at hand in the form of Kamensky bringing up 2 brigades of doughty Russians! These were diced for at the end of move 6, but eventually came on in move 8. The hut represents the village of Pratze, eventually garrisoned by a Russian brigade from IV Column. 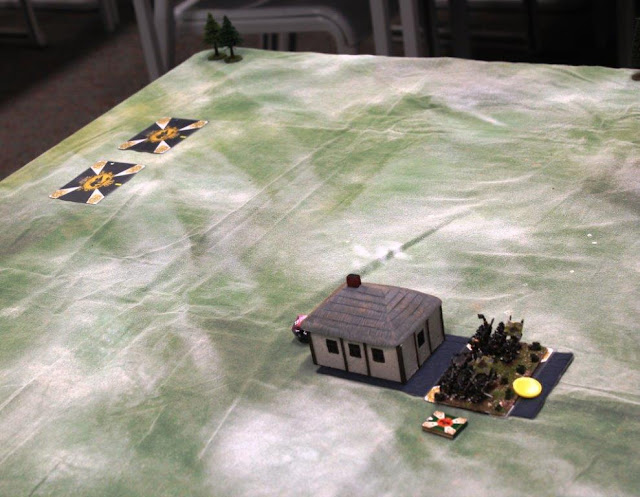 But would IV Column be able to hold Staro Vinoradhy from the aggressive French long enough for the reinforcements to count?﻿ 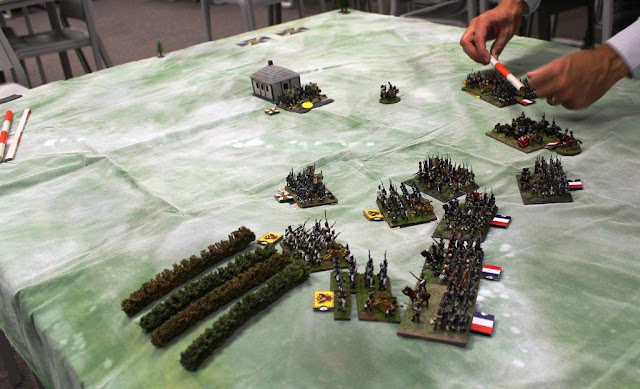 Our Army Morale could stand to lose 4 brigades before it could be rolled for breaking - and we were already down 2...and being forced back onto the objective, which as difficult terrain disadvantaged units fighting on it even further!

As can be seen above, Kamensky's units made good time benefitting from their reserve moves... 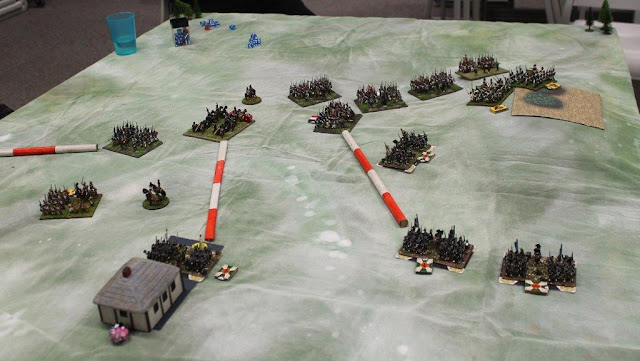 And basically were able to move right across the table so long as they remained 4 base widths from the enemy.﻿ 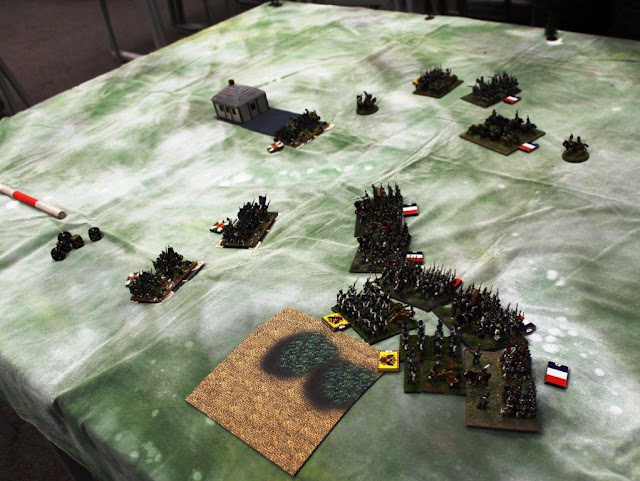 As shown above, the Austrian brigades had managed to move off the difficult terrain, but the French were pushing hard for the objective.... 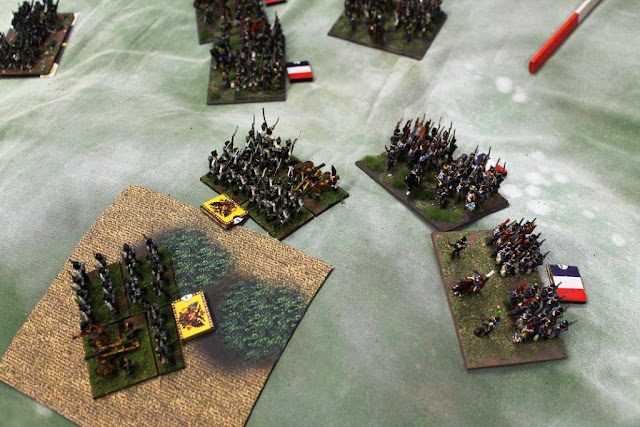 And steadily pushing us off it! 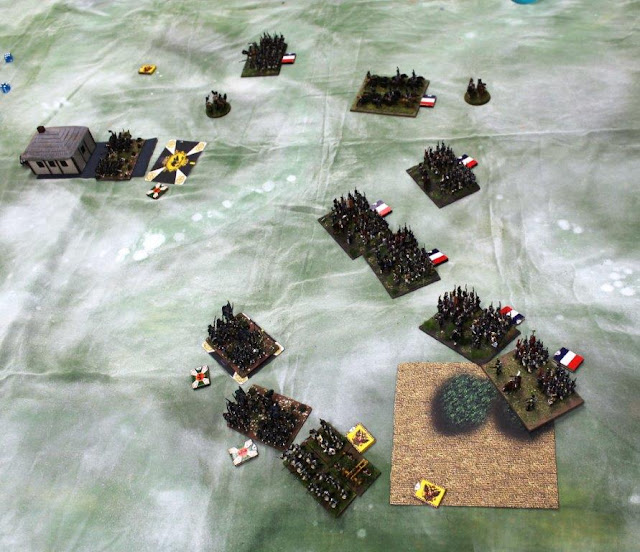 But our gallant Kaiserliks, though forced back, remained in the fight - we were now only one brigade away from our break point, so they needed to!

At move 12, the planned end of the scenario, though the Austro Russian army was teetering at breaking point, we held one objective, Pratze village, and the French held the other, the vineyards...we decided to play through to move 15.

Whereupon our gallant Austrian Avant Garde brigade, which had been making a nuisance of itself over on the French right flank, near Pratze, copped both a devastating artillery salvo and a particularly eye-watering musketry volley, and broke - our army was out of business, leaving the French masters of the Pratzen Heights - again!

Should you wish to consult our scenario, it can be found on Sam Mustafa's Honour forum, in the Blucher scenario bucket: http://www.sammustafa.com/honour-forums/blucher-scenarios/
Posted by Sparker at 20:37
Email ThisBlogThis!Share to TwitterShare to FacebookShare to Pinterest