The last revolt against Caesar in Gaul ended in 51BC at the Siege of Uxellodunum, a large hill fort or oppidum in the Dordogne, France. 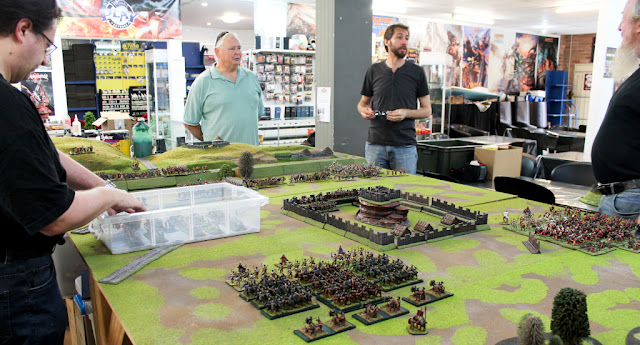 Having learnt the lessons of Alesia, the Gauls had ensured the oppidum was well stocked with food. Unfortunately, the only water source was a spring that emerged halfway down the hill which the encampment crowned, outside the walls...

Caesar accordingly erected a 10 storey artillery tower, protected within a fort, at the slope of the hill, directly opposite and overlooking the water source, and thus denied the Gauls use of the spring through accurate bow and ballista fire.

The Gauls were most dischuffed by this development, and came up with a cunning plan...

Barrels of flaming pitch were aimed at the fort and tower and hurled or rolled down the slope, followed by the cream of Gaullic warriorhood, bent on pulling down the offending tower with grapnels, levers, and sheer brute force...

As what will probably be our final rehearsal before our Alesia Megagame in the New Year, the usual suspects met up at the Hall of Heroes, Campbelltown to recreate this action using Hail Caesar rules. 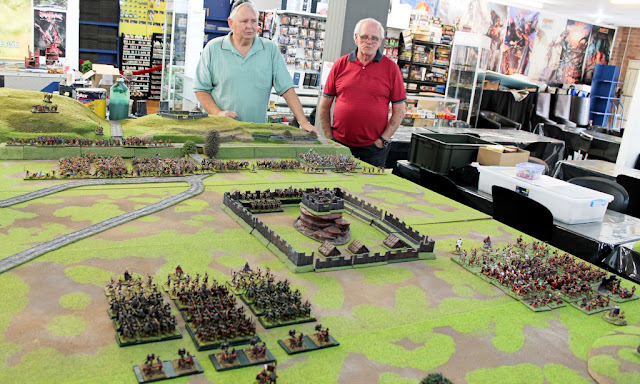 Philip came up with the scenario, which pitted 7 Celtic 'divisions' each of 5 warbands, including an 'engineer' warband, against 2 Roman Legions, each of 9 Cohorts, and the fort's garrison, of which more anon...﻿
﻿

Philip, Mark, Terry and myself played the honest, Gods fearing Gauls, whilst Bryan, Vic, Craig and played the supercilious, sneaky and brutal Romans...

However, although the Gauls had the first move, the Romans were first off the blocks in the whingeing stakes, having calculated that they only had enough troops in the fort to garrison each wall to a depth of three lines, or something - I may be exaggerating a little - however they played on Philip's guilt as a player/umpire so successfully that he gave them a couple more units for the fort! 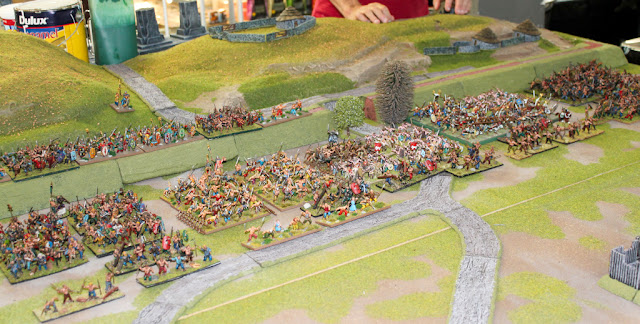 I suppose we did look quite scary...

Anyhow, the flaming barrel tossing and hurling went reasonably well, with fires lit at both ends of the near section of fort wall, eroding the defences from a value of 9 down to 4 at my end and I think 5 at the other end - leaving the smoking walls now well within the destructive capabilities of our hopped up 'engineers'!

So without further ado, in we jolly well went! 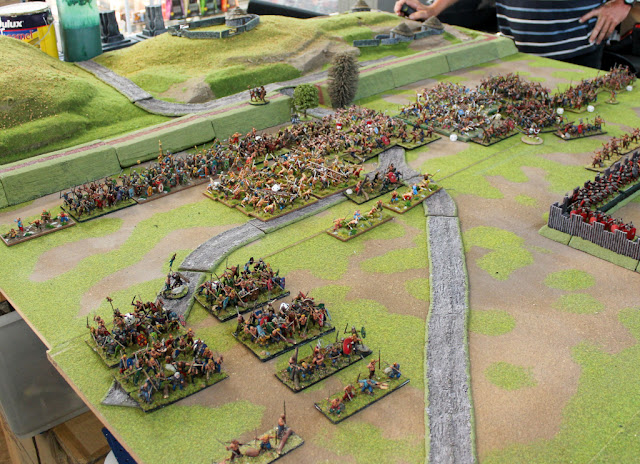 And between us promptly threw a completely uninspiring set of command rolls - instead of racing like screaming banshees to surround the fort, we averaged one move per command! 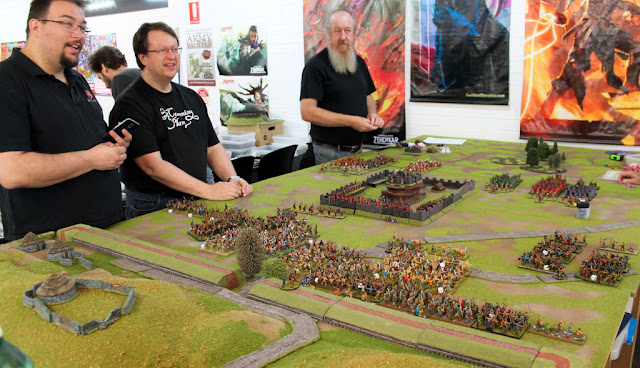 The Romans visibly relaxed, and calmly gave orders to move a Legion up each flank, protecting the fort's side gates - so much for that part of our plan! 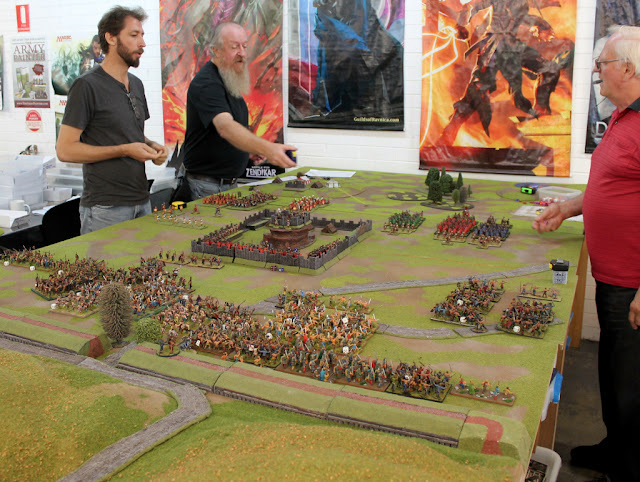 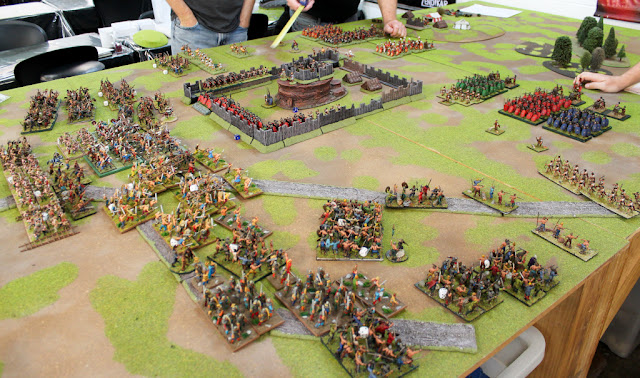 Until we got to charge range!

And managed to breach the fort's wall where the fire damage had been worse! 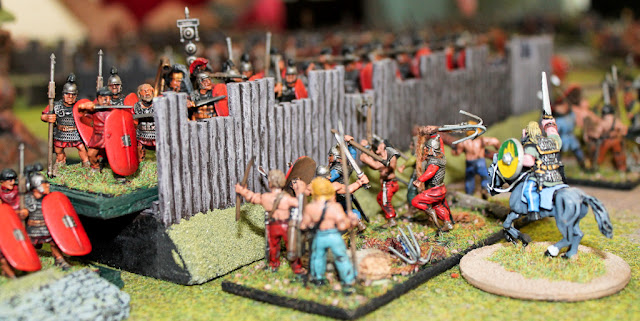 Of course there was still a mound of earth and charred logs serving as an obstacle, but it was a way in... 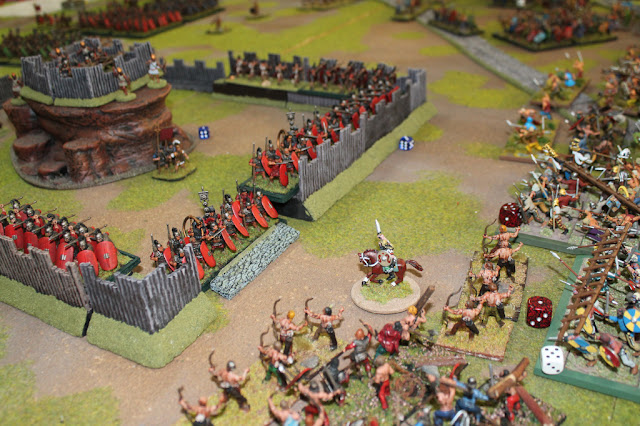 Unfortunately the Romans lost no time in reorganising their defences and shooting down the supporting warbands... 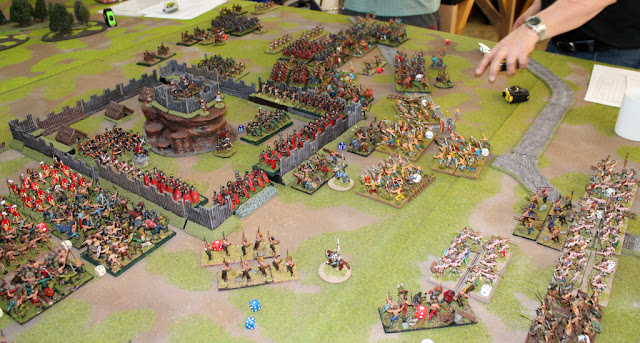 - the Gallic tide slackened off for a while... 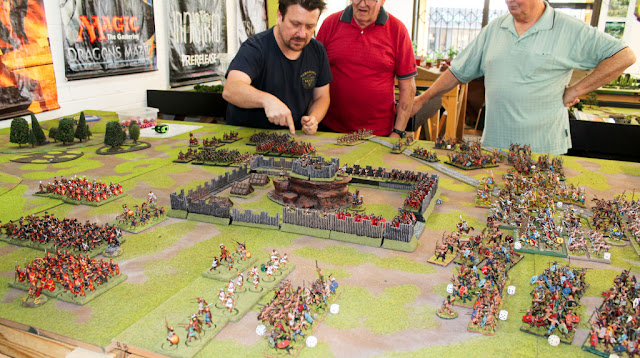 But soon came charging back in, this time with twice the numbers!

We were also battling valiantly to try to force our way to the side gates...not doing too well on the Left...

And doing scarcely better on our right...although I think one of Terry's warbands also got a look inside the fort by way of an improperly secured locking bar!

The Romans were hanging on in the centre...

And passing in their reinforcements through the side gates...

After half a dozen moves of frenetic action, with mounting Gallic losses, we decided to call it a day. After all we had inflicted many casualties on the Roman forces, some even on the Legionnaires!

Then Philip regaled us with the actual history of the battle - it had not been dissimilar to our game - the Gauls lost all hope when Caesar caused a tunnel to be driven all the way from under the tower to below the spring, thus draining it, and any hope of prolonged resistance!
Posted by Sparker at 23:46
Email ThisBlogThis!Share to TwitterShare to FacebookShare to Pinterest