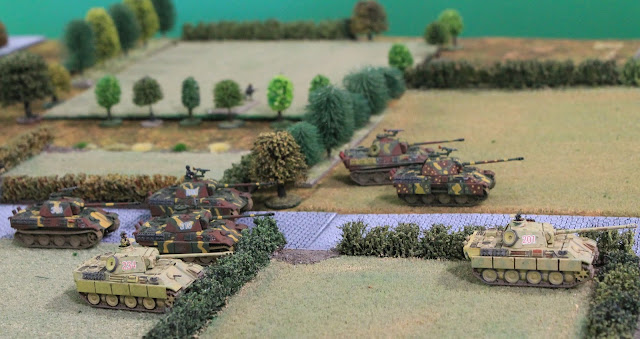 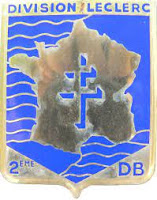 On 13th September 1944, the Free French Groupement Tactique Langlade (GTL) of the Free French 2nd Armored Division - 2eme Division Blinde (2DB) destroyed Panzer Brigade 112 which was attempting to escape from the area around the French village of Dompaire, Lorraine.

There were a string of three villages along the valley of the Guitte river, Lavieville nearest the camera below, Dompaire, and Lamerey on the far edge of the table occupied by these Panthers. 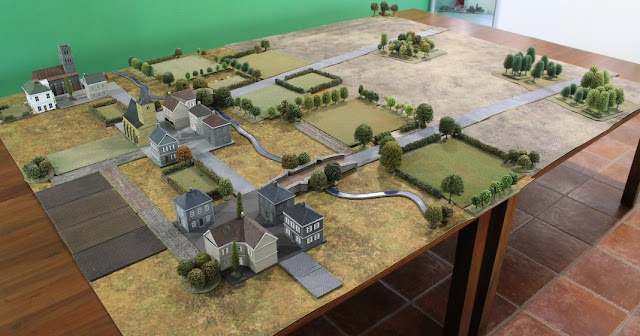 To the south east of the valley lies rising, partially wooded ground, which offer clear views down to the valley. These heights were occupied by the Shermans and M10s of Group Massu, tasked with tightening the ring around I/Panzer Regiment 29's Panthers of Panzer Brigade 112...

The Battle of Dompaire has been assessed as the fastest destruction of a panzer group on the western front, this despite Panzer Bde 112 having nearly twice as many tanks as the GTL (59 Panthers and 45 Pz IVs against GTL's 40 Shermans and 7 x M10s)
As part of Hitler's planned ambitious armoured counter offensive against Patton's US Third Army, the 5th Panzer Korps was to attack towards Reims, preventing Bradley's Army Group advancing east from Normandy linking up with Dever's Army Group heading north from Southern France. However,as part of a concerted counterstroke, the Free French 2nd Armoured Division struck deep into the left flank of the offensive... 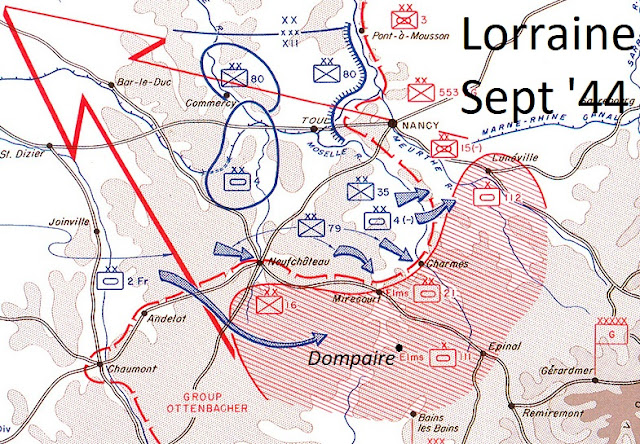 Threatened with encirclement, Pz Brigade 112 attempted to infiltrate south out of the valley to re-establish a coherent defence... The Panther crews of I/Panzer Regt. 29 were inexperienced, being described as 'children' by the villagers of Dompaire. However their age did not hinder them from spending the night before the battle consuming large quantities of Kirsch cherry liquor they had 'liberated' from the villagers...The sailors and soldiers of Group Massu instead spent the rainy night occupying positions on the heights above Dompaire, ready to prevent the Panthers from escaping...

This scenario just reflects about a third of this battle, the part played by Group Massu versus I/Pz Regt. 29, played down a 8 x 6' table. Pz Regt. 29 has 9 moves to seize 1 of 2 objectives in the far corner of the table, representing their escape from encirclement. Group Massu is deployed just behind the ridgeline, and has 1 unit in ambush. 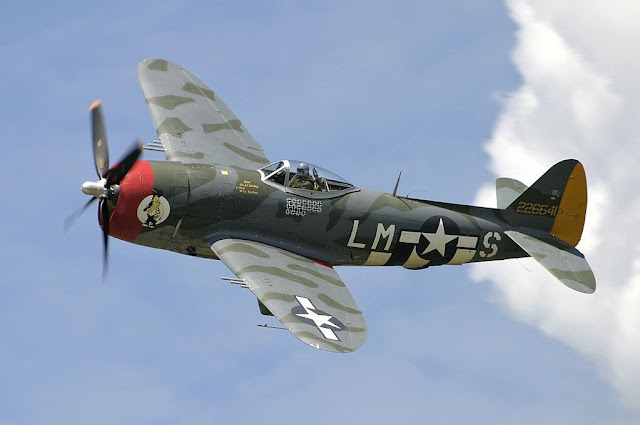 Since the Free Frenchmen received plentiful air support from P47 Thunderbolts s of the 406th Fighter Bomber group, a single strike alone accounting for 8 Panthers, a scenario rule allowed the French to reroll the call for air dice if any Panthers ended their move on a road or track. 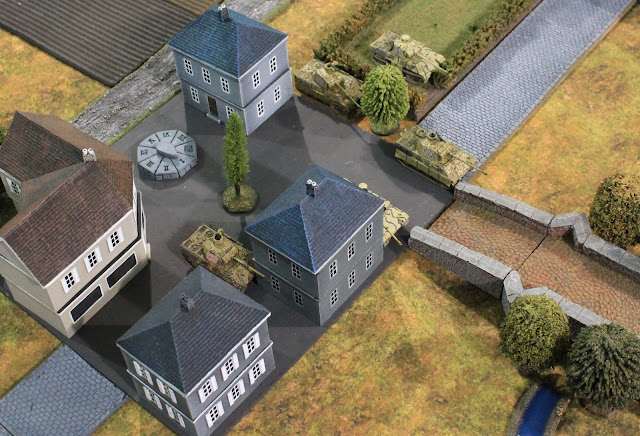 Because the French had the first move, and inevitably the Panthers were starting in the villages, there would be at least one airstrike!

I/Pz Regt. 29 was represented by 2 x Platoons of 5 Panthers and Coy HQ of 2. These were given the SS stats, given the inexperience of their crews, i.e hit on a 3. I also threw in a platoon of heavily armed Panzer Grenadiers, as infantry support is mentioned in some accounts...This brought the Germans up to 109 points. 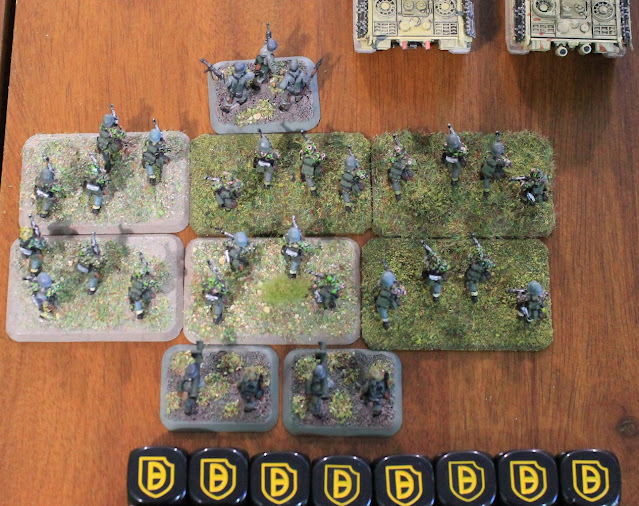 Group Massu consisted of various arms and services, [= table top strength ] for 197 points. Given the experience of these tough colonial troops in the Western Desert and in liberating Paris, these were all classed as Veteran formations: 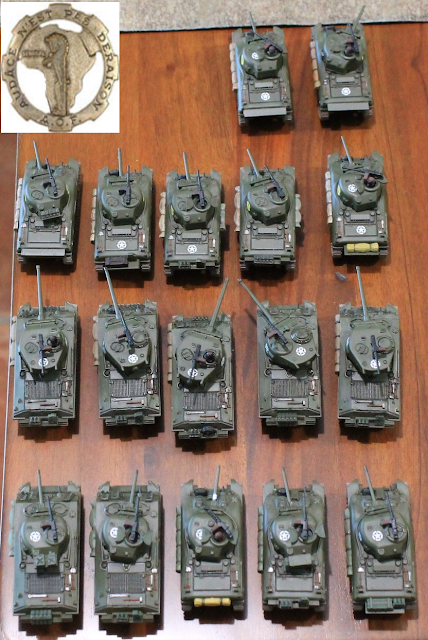 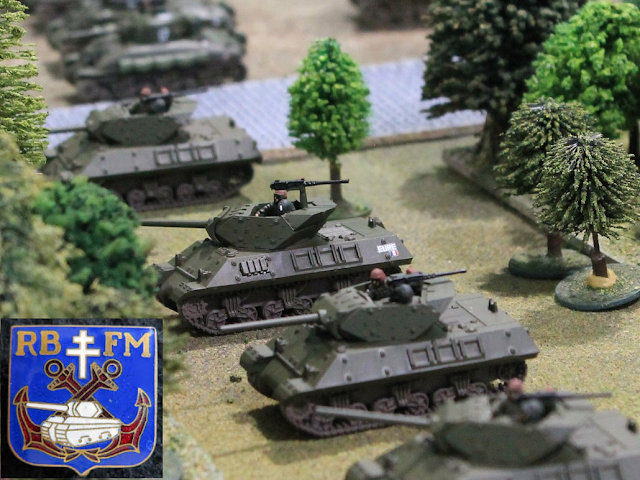 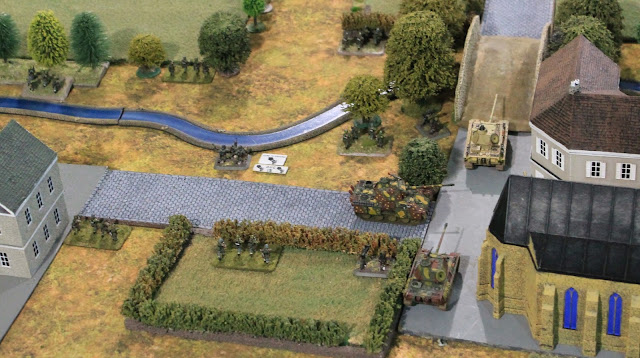 We have already seen the Panthers were forced to start the game, historically, dispersed throughout the villages, whilst their young crews caroused the night away. The infantry formed up on the left opposite the distant objectives. 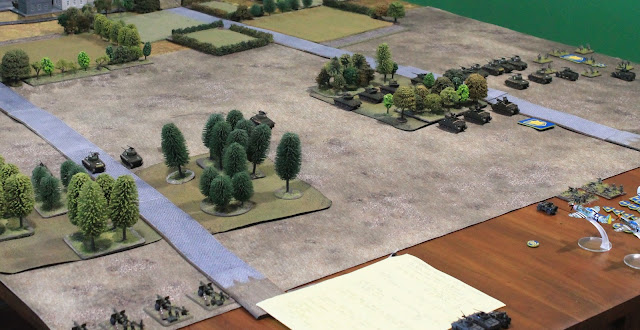 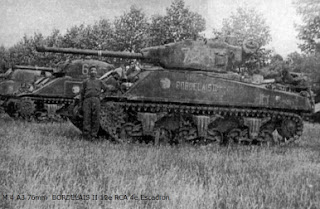 Group Massu was ranged along the ridge above the villages, with the M4 FAO, and the 2 RCA Sherman M4 platoons snug up against the ridge itself to enjoy hull-down concealment. The RBFM M10s would play hide and seek using the 'Seek Strike and Destroy' tactics in the wood nearest the objectives.
The 76mm Sherman platoon would remain in ambush...
TURN 1.    As stipulated, the French automatically received an air mission and with dawn's early light came an unpleasant surprise for the hungover German tankers... 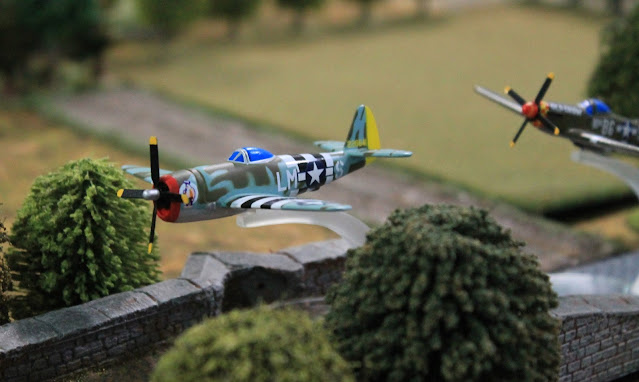 However, despite a hit, the Panther's thick hide staved off the rocket attack. The strike did however induce the Germans to avoid roads and tracks for a while, severely hampering their assembly and move out... 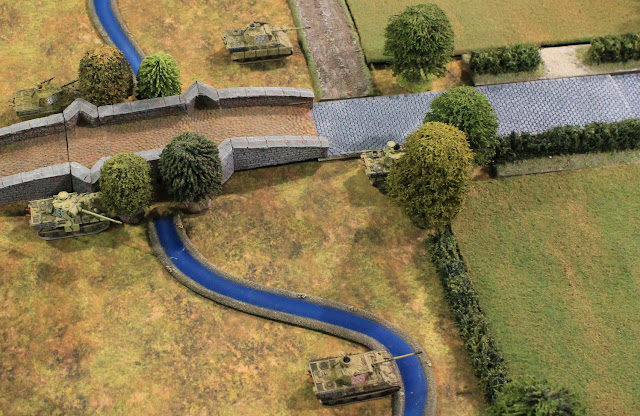 In their enthusiasm to stay off the roads, they may even have presented a more concentrated target to the roving P-47s... 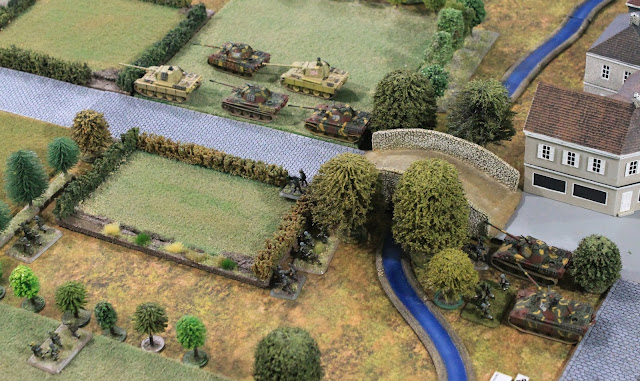 However, rashness may not have been confined to the Germans. Confident and aggressive, one of the Chasseurs d'Afrique 75mm Sherman platoons advanced forward off the protection of the ridge line...

with the intention of better engaging the Panthers while they were still shaking out... 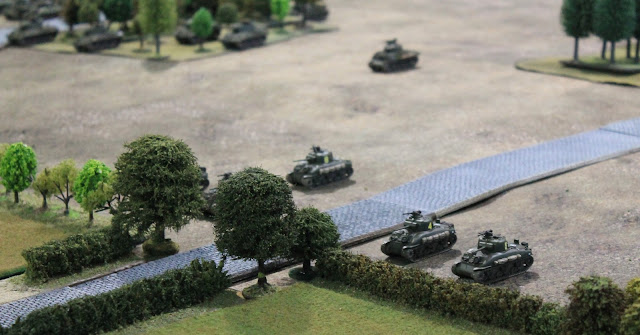 Would their daring pay off, or was this arrogant folly? Tune in next time to find out!
Posted by Sparker at 22:32