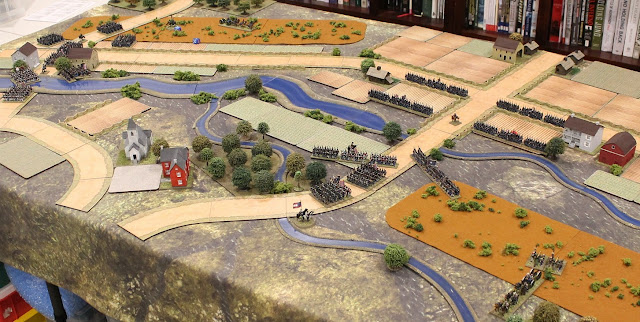 I'm planning to run an Epic scale ACW campaign at the uni, based on the Shenandoah Valley 1862, using Black Powder rules. I'll be using the toolbox approach these rules encourage, with inputs from both the Epic scale variations, and the ACW supplement Glory Hallelujah! 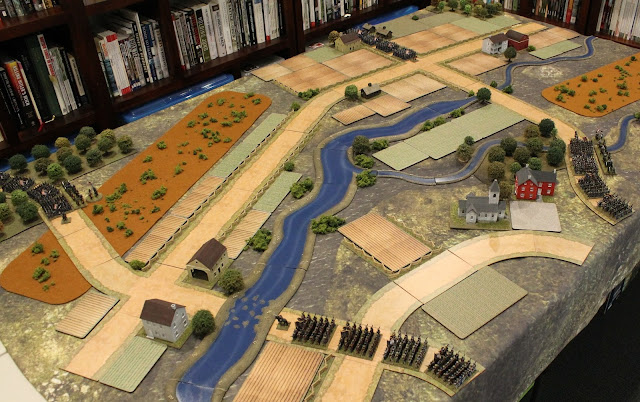 So I ran a solo game with a fictional scenario to test out some of the options around theatre rules and Epic scale distances and ranges. The scenario is that each side have two brigades heading for the fords, which they are attempting to capture. The terrain is made up of all the issues I want to test: open woods, snake rail fences, cornfields. 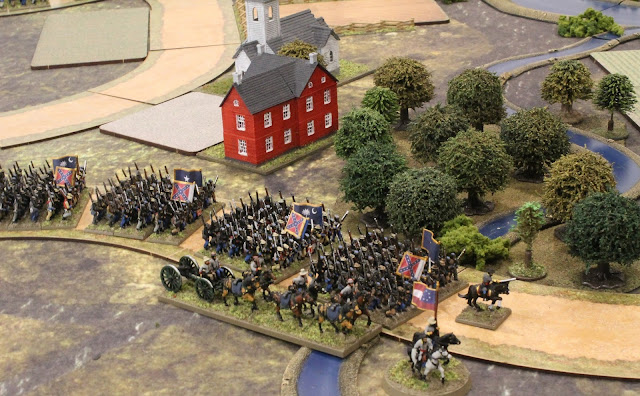 The Confederate brigades started off much closer to the eponymous fords, and will definitely enjoy the 'Rebel Yell' special rule. OTH they only had a 4 gun battery whereas the Union have a  6 gun battery, as suggested in the supplement. 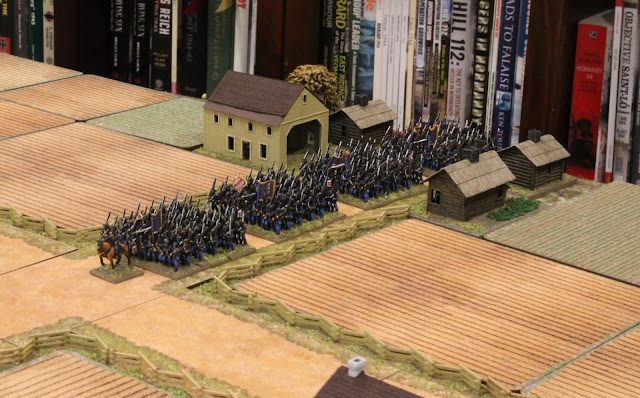 Whilst all command and support radii remain the same, since command is difficult and frustrating enough as it is, as evidenced by the opening moves in this game, with all units remaining in march column far longer than was healthy! Movement is halved to 6 inches per move, and there is no firing allowed if a unit moves twice or more, per Epic. 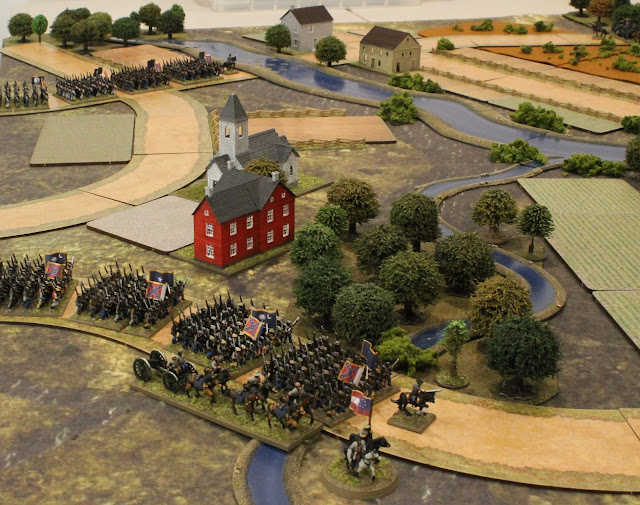 However for this game, I decided not to halve artillery range. Effective artillery range of just 1 foot simply doesn't look right, even at this scale. So a 4 gun "Napoleon' battery will be rolling 3 dice at 6 inches, 2 dice at 24 inches, and 1 dice out to 48 inches: 3-2-1. A 6 gun battery will roll 5-3-1. This seems to provide a more realistic representation of the relative effective ranges of rifled muskets compared with field artillery. 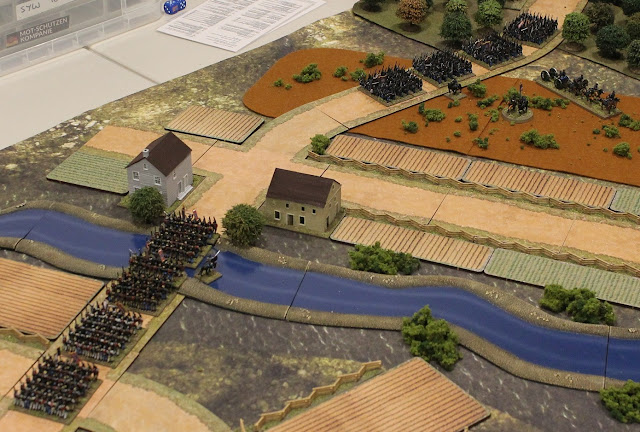 Charges will not be possible under initiative, and have a -2 command roll modifier, per the supplement. Similarly passage of the lines will need a dice roll to complete. All perfectly Epic! 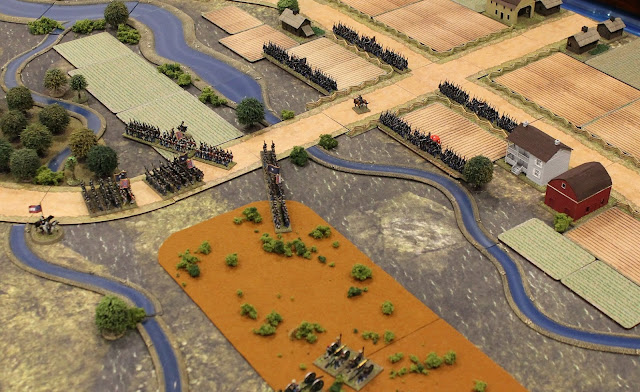 Aside from these, I haven't adopted any other optional rules to add flavour, since they come at the expense of additional book keeping or otherwise slow the game down...

At the wide ford, the Union was eventually able to deploy before the Rebels, and dished out disordering musketry. 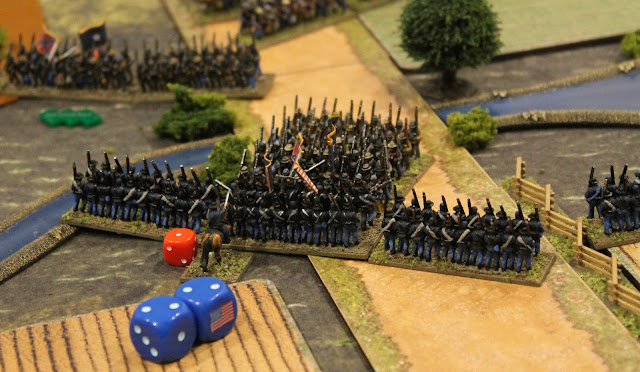 At the narrow ford, a stonking command roll allowed the Union to charge a Rebel march column, forcing it well back from the objective! 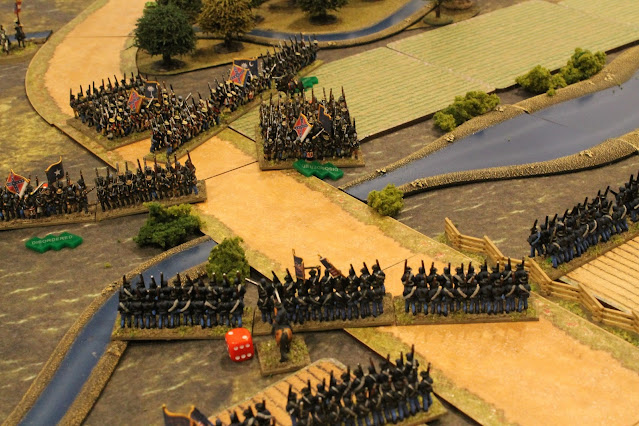 Egged on by the Union CinC to emulate that dashing achievement, the lead Union Regiment at the wide ford also passed the test to charge in, opening the way to occupy that objective. 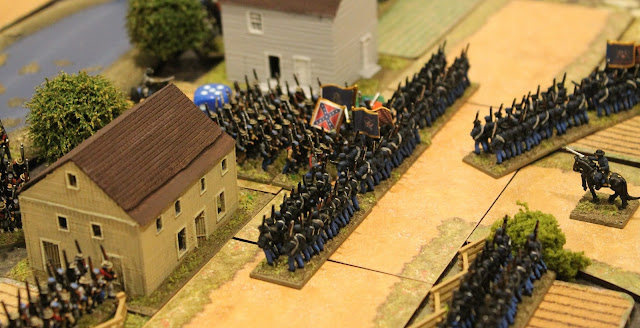 Snake rail fences and cornfields each provided a +1 cover and morale modifier against musketry, significantly prolonging the firefights... 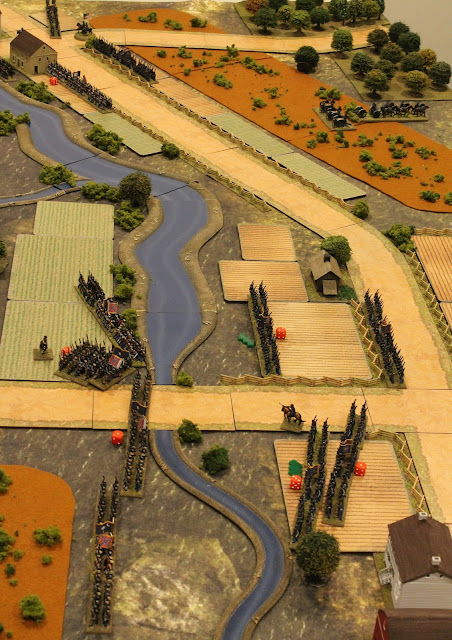 However with the wide ford taken by the Union...

And the narrow ford convincingly retained by the Confederates, dusk fell over a drawn battle.

I'm pleased to have been able to work out a fast paced yet period relevant toolset from Black Powder to cover this period and scale. This size of game would no doubt have benefitted from more period chrome, but that will hamper the really big games down the track that this scale is made for!