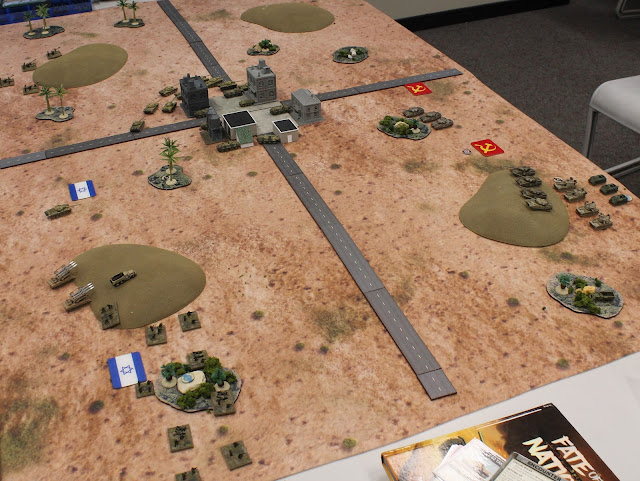 Last night at the Uni, Stuart (pictured on the right below) and I played through a Fate of A Nation game set in the Yom Kippur War of 1973. 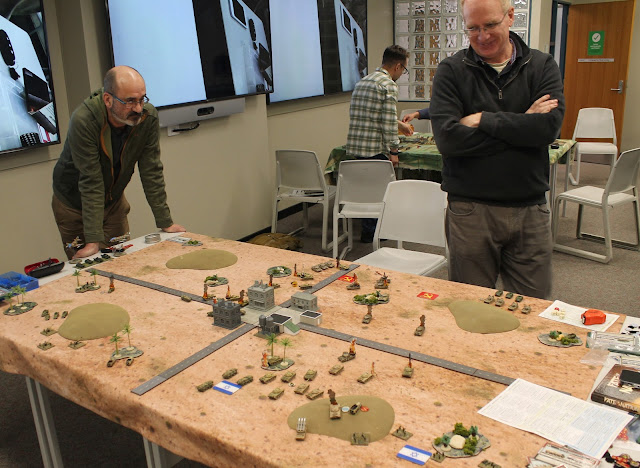 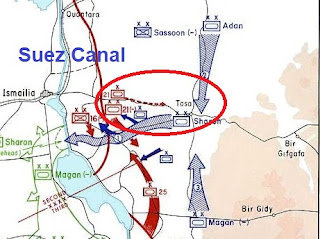 After their defeat in the Six Day War, the Egyptians prepared thoroughly for the next Test:  new T-62 tanks, Sagger ATGMs, ingenious sapper high pressure water hoses to breach the Suez Canal defences. But of particular significance was the long range SAM umbrella the Soviets set up for them, extending some 20 clicks beyond the Canal Zone. Victory was assured under this umbrella, but one step beyond was to invite catastrophe at the hands of the Israeli Air Force! 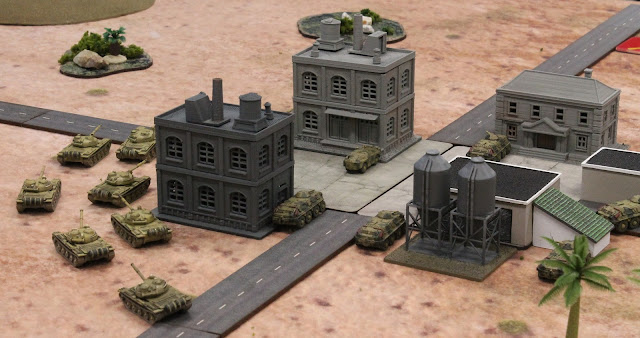 Despite the warnings of his professional military advisors, President Anwar Sadat, high on the initial successes, ordered the advance to continue beyond the SAM umbrella - the central thrust of the 21st Armored Brigade therefore taking it to the town of Tasa, where our game used the Encounter mission to simulate the head on clash with Maj-Gen Ariel Sharon's Ugda...

Attacking with the Egyptians, I had 110 points, centred around two T-62 tank companies. Stuart had 127 points, chiefly taken up with a Sho't Centurion tank company. 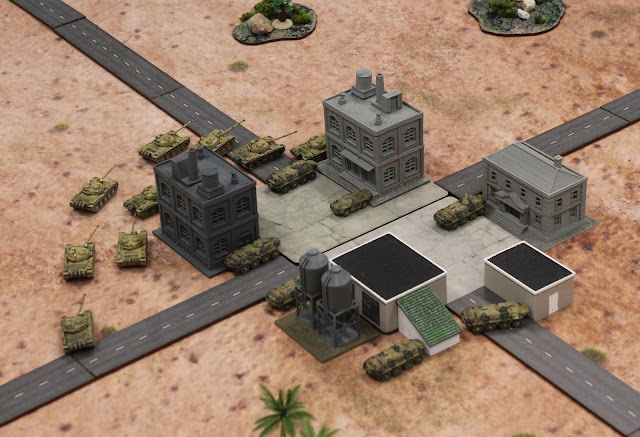 Reluctantly placing a T-62 company and my Sagger platoon in reserve, I used my BRDMs to Spearhead into Tasa, which was then secured with the BTR-60 Brongruppa. The on table T-62s then flanked around the town to seek cover from the Sho'ts. 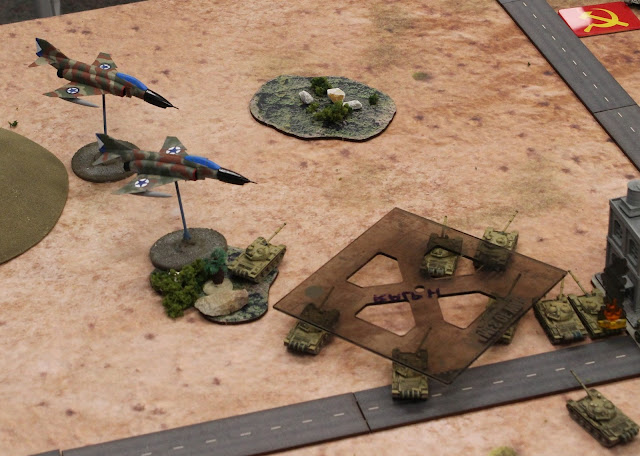 Unfortunately there was no hiding from marauding Skyhawks! Thanks Mr President! 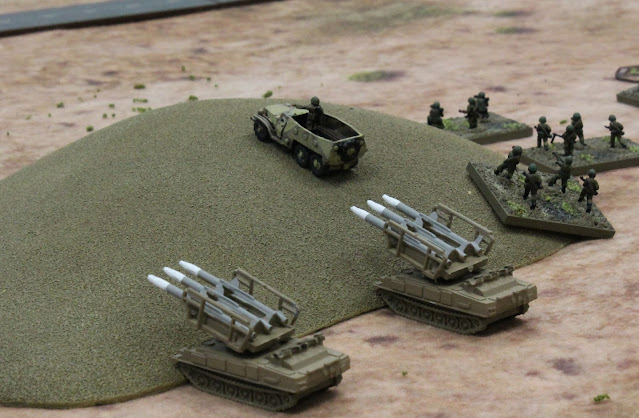 Fortunately, I had my own medium range SAM cover, which managed to despatch 2 of the 4 Skyhawks... 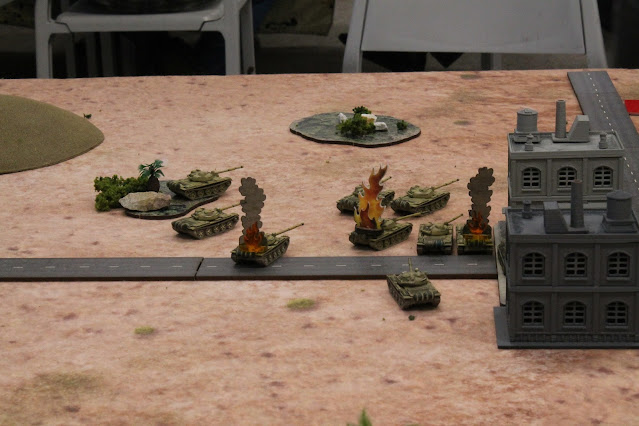 Although these did plenty enough damage with their 1,000lb iron bombs! Accurate Israeli tank fire with their 105mm guns brewed a couple more T-62s.

The survivors advanced towards the objective and brewed two Sho'ts! 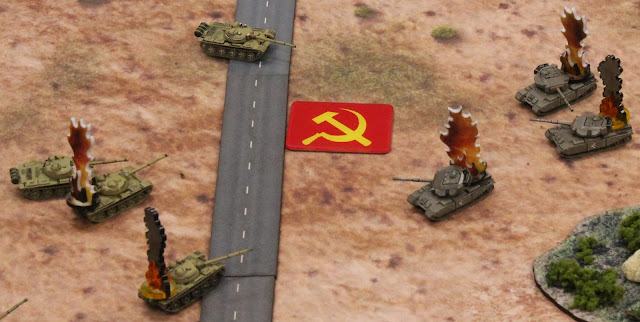 Then, on the objective, a third!

Stuart had brought up his OC, which knocked out the remainder of the original T-62 tank company, re-securing his objective. 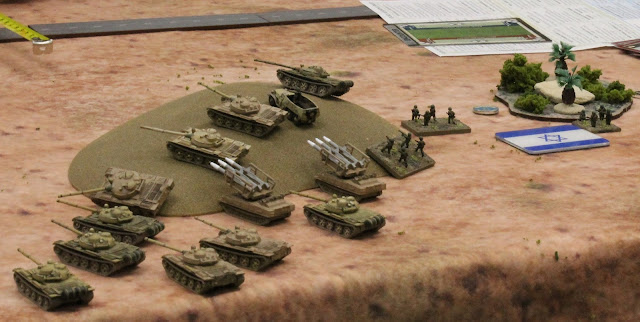 But by this time my second company was on-table... 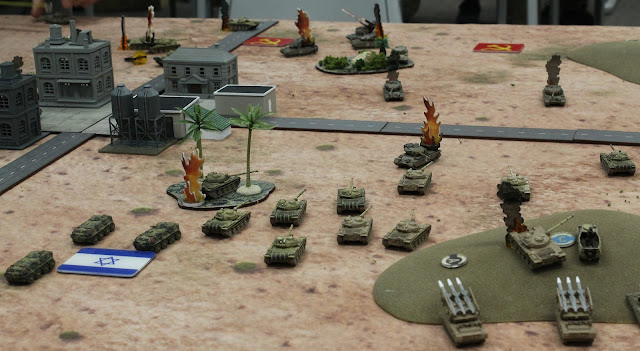 Advancing boldly to engage them, another Israeli tank platoon did well with long range 105mm sniping, but then paid the price for getting too close to fine Soviet Tank engineering! 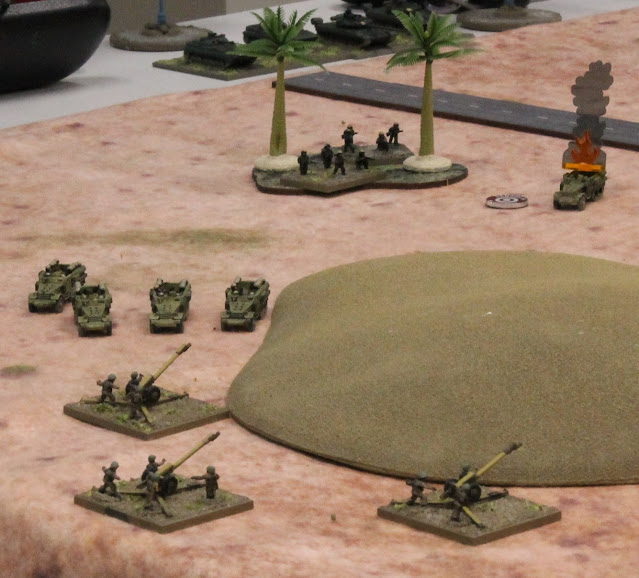 My arty, which had harassed the Israeli open topped APC's, provoked a response and lost a gun...how good are they in the direct fire role I wondered... 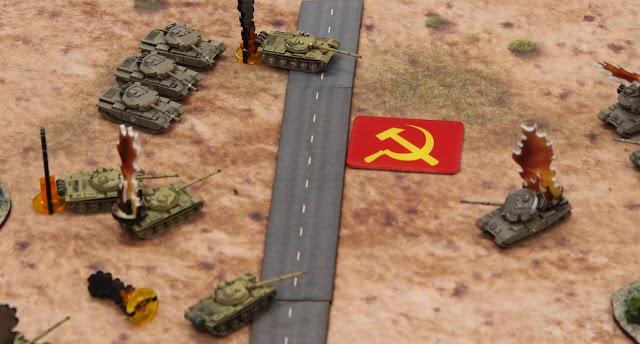 But, at turn 6, with Stuart's reserves denying his objectives to me, and mine also securely held, we called it. An engaging and fun game!
Posted by Sparker at 21:58
Email ThisBlogThis!Share to TwitterShare to FacebookShare to Pinterest
Labels: Arab Israeli Wars, Fate of a Nation, Team Yankee